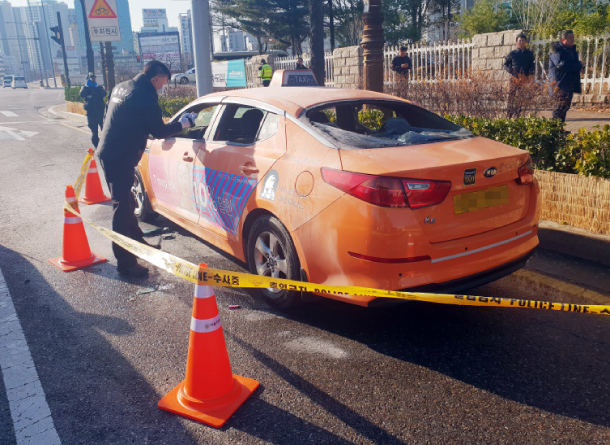 Police investigators examine the taxi where a driver set himself on fire near the National Assembly in Seoul Monday. [NEWS1]

A Seoul taxi driver died after setting himself on fire in front of the National Assembly in western Seoul on Monday to protest the planned launch of a ride-sharing service by local IT company Kakao.

The driver, identified only as a 57-year-old surnamed Choi, sprinkled flammable materials on his body inside his car and burned himself to death in front of the Assembly’s entrance at around 2 p.m.

Choi was rushed by police and firefighters to a nearby hospital, but died at 2:49 p.m.

According to his acquaintances and police, the driver killed himself to oppose Kakao’s plan to launch a commercial carpool service in South Korea.

Choi reportedly notified his acquaintances of his self-immolation plan beforehand.

The incident occurred as Kakao launched a commercial carpool service on a trial basis on Friday ahead of its formal launch slated for Dec. 17.

In late November, tens of thousands of taxi drivers staged a protest rally near the National Assembly against Kakao’s commercial carpool service, calling for the swift passage of a revised bill that would ban its entry onto the market.

The rally was their second massive protest following a nationwide work stoppage and demonstrations by around 60,000 taxi drivers on Oct. 18.

They oppose the planned launch of Kakao T Carpool, a ride-sharing service designed to connect ordinary drivers to passengers during the morning and evening rush hours. Taxi drivers claim the tech company’s service will kill the taxi industry.