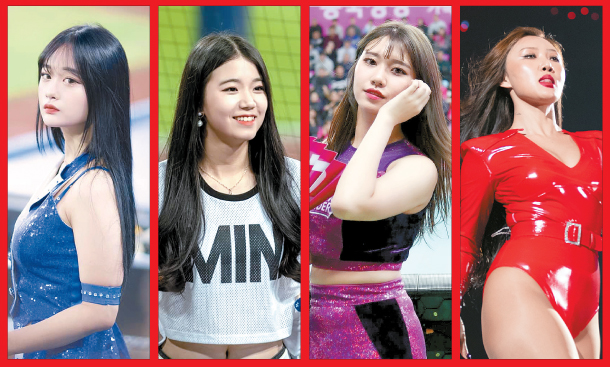 Several cheerleaders last week revealed some of the harassment they often face, kicking off a public debate about the objectification of women’s bodies. From left are cheerleaders Hwang Da-goun, Shim Hye-sung and Park Hyun-young. Hwasa of girl group Mamamoo, far right, was also at the center of controversy last week after her performance at the Mnet Asian Music Awards on Dec. 12. [SCREEN CAPTURE, MNET]

Go to almost any sporting event in Korea and you are likely to find cheerleaders smiling and dancing while wearing short skirts and crop tops in front of the crowds. While their job requires them to hype up the fans, they are often subject to harassment just for doing their jobs, and for some in the industry, it’s gotten to be too much.

A recent round of Me Too revelations from young cheerleaders has fired up the gender debate once again, this time centering specifically on the objectification of the female body.

The Ilbe post included a picture of Hwang taken from the crowd and a message that described her body using obscene language.

“Being a cheerleader is fun, but is this the price that I have to pay?” read Hwang’s post. “I can’t even look at the comments because they are too filthy. Who are you to mock me like this? People send me messages describing the details of [having sexual] intercourse, and even send me pictures and videos. Please. It’s unbearable. It’s all I can think about when I see something like this and it ruins my day. I’m scared and feel so powerless. I’m just so sorry for my parents who have to see this.”

Hwang quickly deleted her post after it drew a heated response from the public. But she wasn’t alone. Her colleague Shim Hye-sung of the same team posted on her Instagram a message reading, “You ask us whether we’re going to continue the next year, but then tell us so easily to quit if we can’t do it,” read her post uploaded on Dec. 11, the following day. “You put all the blame on the victims by saying, ‘You should wear clothes that don’t show [your skin] if you don’t like sexual harassment. Get a job that doesn’t make you expose yourself.’ We are the ones that have no portrait rights, no right to say that we were harmed, no right to be a victim, no human rights … We can’t say anything because [people] might call it noise marketing, but we still have to fill your sexual desires.”

Another Samsung Lions cheerleader named Park Hyun-young posted a comment in agreement, saying, “I hope you know that people become cheerleaders [because we] like to dance and be on stage, not because we want to expose ourselves.”

Though all the posts and comments are deleted, it was enough to spark a public gender debate. An online petition was uploaded to the Blue House online petition board titled, “Regarding sexual harassment towards cheerleaders, please get rid of cheerleaders in sports games.”

The petition urges for all cheerleaders to be removed from sports games, as they not only become victims of unwanted sexual harassment but also objectification.

“They are not even necessary at professional sporting events, and a lot of active cheerleaders are teenagers,” reads the petition. Over 1,000 people have signed the petition as of Thursday, which is not enough to get an answer from the government but enough to get the conversation going.

There are over 20 other petitions regarding cheerleaders - most of them asking for them to be abolished, but others in their defense as well.

Having young women as celebratory or decorative figures at events has long been controversial in the world of sports. For instance, Formula 1 racing banned the use of “Grid girls” starting with the 2018 World Championship season on the grounds that the “custom does not resonate with our brand values and clearly is at odds with modern-day societal norms.”

“Most athletes are men, and women have existed as auxiliary means to cheer the male players on,” said Lee Na-young, a sociology professor at Chung-Ang University. “I wouldn’t say it’s right to abolish cheerleaders at this moment because of the sexual harassment, but [they should be abolished] in the long term.”

According to an owner of an agency that represents cheerleaders who wish to remain anonymous, arguing over whether cheerleaders should be eliminated is the wrong conversation to be had.

“Sexual harassment is crime, and we should be placing the blame on those committing those crimes - not talking about whether the job should exist,” said the insider.

According to Prof. Yun Ji-yeong of the Body & Culture Institute at Konkuk University, cheerleaders themselves are not the problem, but rather, there is a problem with way they are forced to cheer at games.

“They have a military band in the
Army who is there to cheer on soldiers without being sexy or provocative,” said Yun. “Cheerleaders were forced to be sexy and seductive for the male audience, [and that] should be the focus of the discussion. They should be able to carry on their jobs without having to surrender to unfair requirements.”

In a similar vein, singer Hwasa of girl group Mamamoo caught the eye of K-pop fans during a performance at the 2018 Mnet Asian Music Awards (MAMA) ceremony performance on Dec. 12, wearing a red swimsuit-like costume. Hwasa’s powerful performance of her song “Don’t Give It To Me” became the center of attention, after she appeared on stage with much of her body exposed and dancing among half-naked male dancers. Her provocative dance moves aroused an online debate over whether it is appropriate for performers to expose so much of their bodies.

“The men are more exposed than she is, and she has all the necessary parts covered up; so what’s the deal?” reads one comment on a video of the performance on YouTube. On the other hand, one tweet read, “This is not right. Let’s please stop women from becoming sexual objects with performances that call themselves sexy.”

Professor Yun explains that the two issues are closely linked together. “Women should be able to expose themselves and feel free about their bodies, but they shouldn’t be forced to do it in a way that’s deemed as sexy by the men,” said Yun.

“For instance, feminists expose their bodies, but in a way that doesn’t touch on the sexual demands of the male desires. Women should be able to have a profession and show their bodies regardless of the male gaze.”