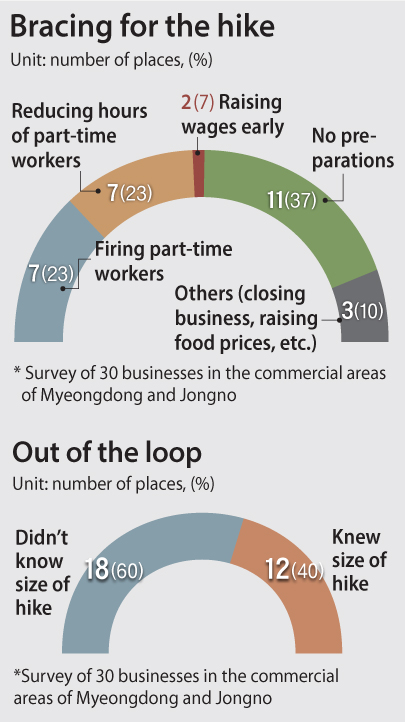 While busily preparing for the lunch crowd on Christmas eve, Mr. Lee, the 63-year-old owner of a ramyeon shop in Myeong-dong, central Seoul, sighed about this year’s hourly minimum wage increase.

“It’s been difficult to keep up,” Lee said. “I had to reduce my two regular employees to one, and also my two part-time workers to one. I stay late to make up for work.”

The JoongAng Ilbo surveyed 30 businesses affected by the minimum-wage hike in Myeong-dong and Jongno 3-ga, central Seoul, from Dec. 24 to Dec. 25. It asked if they knew about the hike and what they were planning to do after it goes through.

Surprisingly, some 18 business, or 60 percent of the total, did not know the extent of next year’s minimum wage hike. Nearly 40 percent of the businesses said they were unprepared for the rise. Only 7 percent raised wages before the hike.

Lee was unaware of the size of next year’s hike. When told about it, the restaurant owner drew a long sigh, “I would like to raise wages if I could as everyone works tirelessly,” he said. “But right now, I really have no room to do so.”

Although Lee’s restaurant has been running for 14 years, the owner recently downsized: he closed off the second floor because he couldn’t manage it with the smaller staff.

Like Lee, 46 percent of surveyed business owners said they were looking to cut costs by either firing part-time workers or reducing their hours. The changes will likely result in a vicious cycle of cutting costs, resulting in smaller operations and a decrease in sales.

Kim, a 41-year-old who owns a bar in Jongno, echoed Lee’s frustrations, “It rose so much this year, and it’s going to rise again next year?” he asked incredulously. “I tried to cut costs by reducing the number of part-time workers and having family members come to work. I really don’t have a solution for next year.”

Only 13 out of 30 businesses (or 43 percent) responded that they were managing to pay the current minimum wage.

“I pay 7,600 won per hour for part-time workers right now,” said Kim Jong-il, owner of a Chinese restaurant in Myeong-dong, “but it’s been too much so I raised food prices on the 24th. I think I will have to fire part-time workers next year.”

Businesses that pay more than the minimum wage face problems as well.

A 39-year-old karaoke business owner in Jongno surnamed Kim said he pays 8,500 won to part-time workers. Logically, he should increase that when the minimum wage goes up. If he doesn’t, people may quit.

“There are a lot of troublesome customers at night, so it will be difficult to find someone without raising the wage to 9,000 won per hour,” he complained.

Only one establishment out of the 30 surveyed said that current sales were enough to cover next year’s hike.

Based on this year’s hourly minimum wage of 7,530 won, a worker is paid 1.205 million won if they work eight hours a day for 20 days. Under the same conditions, a worker next year will have to be paid 1.336 million won a month. For an employer of four part-time workers, that amounts to an increase of 524,800 won. According to a recent survey of 1,204 small businesses by the Korea Federation of Micro Enterprise, the average monthly sales of such establishments amounts to 15.60 million won.

Some business owners are taking in less than what they pay their employees.

“Seeing how they raise the minimum wage, I can’t help but think that they are detached from reality,” said a 53-year-old restaurant owner in Jongno surnamed Bae. “If sales amount to 100, labor costs shouldn’t be over 20, but they’re currently over 30. Employees earn more than the employer.”