Soju goes beyond the little green bottle: Korea is known for this potent alcohol, but changes are happening fast

Soju goes beyond the little green bottle: Korea is known for this potent alcohol, but changes are happening fast

If asked how much they can drink, most Koreans reply with how many bottles or glasses of soju they can take. Soju is probably most Koreans’ first alcohol, whether they grow to like it or not. Some who argue soju is too strong for them mix it with beer, making the distinctive Korean cocktail called somaek, combining elements of the words soju and maekju, which is beer in Korean.

Soju has been a soulful drink. It’s cheap, its price ranging from 3,000 won to 5,000 won ($2.70 to $4.50) at restaurants and bars. TV dramas show scenes of people drinking soju with friends when happy, and alone when sad. The popular samgyeopsal, grilled pork belly, is often eaten with soju, which cleanses grease and oil from the mouth.

So although the little green bottle of soju seems eternal, it’s always subject to trends. Combining it with citrus juice is one such current trend. Juice from the Philippine citrus fruit calamansi goes well with soju. Even some somaek drinkers have been converted. There’s even a technique: pour one glass of soju from a bottle, fill it with calamansi juice, shake and serve. Many who didn’t previously enjoy soju have come around, according to testimonials on social media.

The market for flavored soju, which boasts lower alcohol levels, was created in 2014. With the release of Sunhari, Chum Churum’s soju made with yuja - also known by its Japanese name yuzu - a new market segment was born. Within 100 days of the drink hitting the market, some 40 million bottles were sold. That spawned many different types of flavored soju through 2015, such as peach, grapefruit and even pomegranate. But the demand for flavored sojus died the following year. Soju makers tried exporting fruit flavored sojus to markets in Southeast Asia and elsewhere, and had success. Companies introduced versions made with fruits that were rare in those countries - such as strawberries or plums - which were also previously unavailable in Korea.

While most people know soju as a cheap drink in a green bottle, there are a variety of premium sojus. While the green bottle versions are diluted distilled alcohol with different starches, the premium varieties are made with selectively chosen rice or other ingredients and aged in special porcelain or oak barrels.

In 1964, the Korean government forbade the making of many alcoholic beverages from grains because Korea was short on food. With that decision, soju became pure alcohol diluted with water. In the early 1970s, the alcohol level hit around 30 percent, but was soon lowered to 25 percent. Different companies became big in each region: Seoul had Jinro, while North Gyeongsang had Kumbokju and South Gyeongsang had Muhak. To make the green bottles more popular with women drinkers, companies started to hire female celebrities for their advertisements, and Lee Hyo-ri was the woman whose image promoted soju for the longest time - for five years, from 2007 through 2012. In the meantime, the alcohol level has steadily come down to a range between 16 and 18 percent. 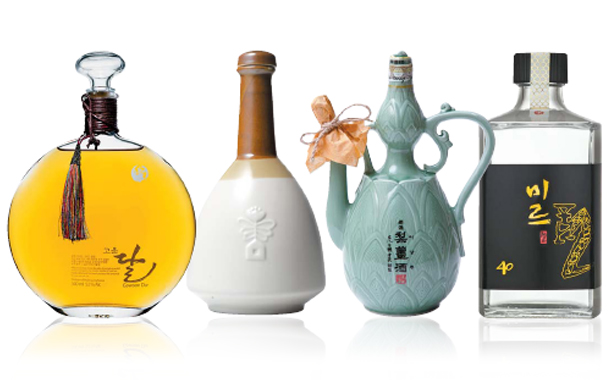 While the green bottle soju is considered the alcoholic beverage of Korea, there are now premium sojus in the market for people who want to pair Korean food with locally made distilled drinks. [LEE JI-MIN]

With mass market soju getting increasingly lighter, drinkers seeking the stronger stuff look for Chamisul Original with the red screw cap, as well as Jeju’s soju brand, Hallasan, which comes in a clear bottle and topped with a white cap. Both have an alcohol level of around 21 percent. Hard-core soju drinkers claim the red and white cap brands are the “real” soju.

Some companies are working to revive recipes from before the ‘60s and establish soju’s reputation as a true Korean traditional liquor like makgeolli, rice wine. Global foodies have encouraged this trend: they want a Korean drink they can pair with Korean foods, much like how they might drink wine with certain European cuisines, sake with Japanese foods or pisco with with some South American foods.

These premium drinks - also called soju - are made from rice or other grains and fruits. To clearly distinguish them from the industrial, green bottle soju, premium brands are called distilled soju. Meanwhile, the stuff in the green bottles is known as diluted soju.

Better known brands include Gamhongro, Jukryeokgo and Yigangju. Gamhongro is flavored with cinnamon, so it’s a popular gift in the wintertime when people favor hot cinnamon drinks. Jukryeokgo’s label shows bamboo and pine leaves and Yigangju has a spicy ginger flavor. While most restaurants and bars only offer soju by the bottle, a bar named Zac in Yeoksam-dong, southern Seoul, sells these distilled drinks by the glass, just like a Western-style whisky bar. Bottles intended as gifts can be purchased at major department stores.

One of the most expensive sojus is called Gowoon Dar and costs around 360,000 won for a 500 mililiter (17 ounce) bottle. It is made from omija, a local berry that got its name because it seems to combine five different flavors. Two versions are available in a clear round bottle with a traditional Korean style tassel. One was aged in porcelain and the other in oak.

These are made by small companies, but the big boys are also getting in on the act. Ilpoom Jinro, by Hite Jinro, which is made from rice and matured in an oak cask for 18 years, became the most popular premium soju after its release in October. Only 6,000 bottles were made. Hite Jinro, known for its green bottle Chamisul brand, realized there was demand for higher quality drinks. A previous soju matured for 10 years in oak completely sold out. The 10-year-old product was particularly popular because of its backstory. In 1996, Jinro released a distilled soju matured one year in oak but had to stop producing it due to the 1997 Asian financial crisis. A large amount was left in oak barrels, and, in 2007, the company released its Ilpoom Jinro brand of 10-year matured soju. The 18-year version is only available at restaurants and bars, not at supermarkets due to limited production. The factory price is about 65,000 won for a 375 mililiter bottle, but some individuals are selling bottles on social media for much more.