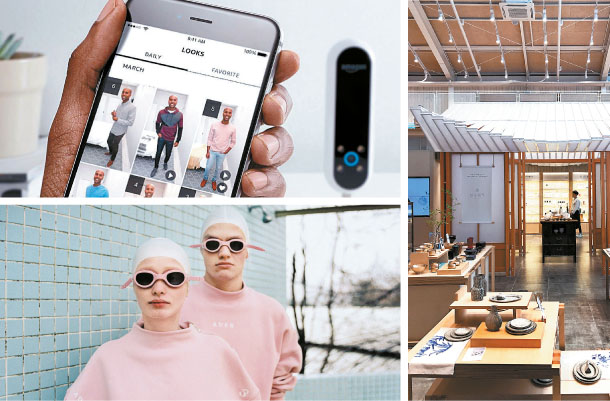 In 2019, retro will remain hot, and gender-neutral fashion will become ever more neutral, according to Lee Hyang-eun, a design engineering professor at Sungshin Women’s University, and professional speaker and consultant Kim Yong-sub.

Other themes they see are the environment, data and consumers becoming even more demanding than they have been in the past.

The JoongAng Ilbo sat down with the two trend analysts to discuss their forecasts for the new year.

Lee is a co-author of “Trend Korea 2019,” an annual trend report published by Seoul National University’s Consumer Trends Analysis Center. Kim is the author of “Life Trend 2019,” another comprehensive trend report. He has also spoken at over a thousand seminars hosted by large companies, including Samsung Electronics.

A retro wave has swept over Korea in the past few years, as cafes and restaurants began adopting designs from the 1970s to the ’90s. Many have enjoyed success.

Lee Hyang-eun expects “newtro,” the term used to describe the return of the retro, to continue winning over fans from all age groups this year.

“The return of the 1970s-to-’90s style brings back memories for older generations, but offers a whole new culture for young people in their teens and twenties,” said Lee.

The key to newtro is not bringing back the past as it was, but polishing it to suit contemporary tastes. Good examples are Dosan Bunsik, a casual restaurant that rose to social media fame last year, as well as Fila’s Disruptor 2, a fresh take on a shoe originally released in the 1990s.

“The trend is positive for brands, which can target new customers, and for young consumers as well, who can develop a sense of respect for cultures and objects that are older than them,” said Lee.

Chamelezones, or spaces that transform beyond their intended purpose, is another trend to keep an eye out for in 2019.

Dongchoon 175 is a warehouse-turned-shopping mall in Yongin, Gyeonggi, that is becoming a huge hit with women in their 30s and 40s. Previously a logistics warehouse, the building now hosts everything from clothing stores to a trampoline park and a Finland-forest inspired lounge.

“As chameleons change color based on their surroundings, these spaces transform according to different situations” said Lee.

Businesses can also use chamelezones to win customers back to brick-and-mortar stores by encouraging interactive experiences and hosting regular exhibitions and concerts.

“It’s important to breathe new life into spaces and attract people by adopting new concepts and technologies,” said Lee. “The key here is to create experiences and satisfy the five senses.”

Data intelligence is expected to be a dominant theme this year.

This technology combines data analysis capabilities with voice and facial recognition tools to personalize a user experience and give businesses a better idea of consumer preferences.

Gender neutrality, a long-running theme, seems to be evolving and going beyond the simple idea of swapping dominant colors and dressing up.

“Even with what we call unisex fashion, women just end up wearing men’s clothing,” said consultant Kim Yong-sub. “Gender neutral seeks to erase the distinction between the genders itself, and this trend is quickly expanding across not only fashion and beauty businesses but corporate structures in other sectors.”

Kim predicts that the movement to look beyond people’s genders will gain traction in 2019, especially after the Me Too campaign and claims of harassment have shaken Korea.

“There are times where trends stop being limited to a social issue and become economic, and that is happening with gender issues today,” he said.

People will become more selective about what they eat too, Kim says.

Starting around 2016, Koreans started pursuing their preferences in consumption instead of simply following the masses. Kim believes 2019 will be the year when people have fully developed preferences and adjust their lifestyles accordingly.

He calls this preference-based consumption.

“The tendency to prioritize personal preferences will become especially evident in food consumption, leading people to try to identify the origin, types and the processing methods of whatever they eat,” he said.

The rise of the single-origin coffee attests to the growing power of personal preferences.

Single-origin coffee is made with beans grown from a single farm, geographic area or country. Many consumers seek them out as they want to taste the flavors of a certain region instead of blends, which are made of coffee beans from several places.

Environment-wise, 2018 was the year of awakening for Korea, especially on matters regarding plastic waste.

“In the past, only a small minority demonstrated an interest in environmental issues, but now celebrities and the wealthy also talk about them,” said Kim.

As popular figures show interest, it will become fashionable to talk about the environment, Kim predicts.

“Now, corporate interest in the environment is not a matter of choice but also of survival,” he continued. “Only businesses that actively react to environmental issues will attract consumers.”