Go hog wild in celebration of the Year of the Pig: Welcome the golden swine in style at one of many fun attractions

Go hog wild in celebration of the Year of the Pig: Welcome the golden swine in style at one of many fun attractions

Young visitors at Pig Park in Icheon, Gyeonggi spend time with piglets running around the park. Visitors can not only feed the pigs and carry them, above right and above left, but they can also enjoy performances featuring the cute porkers. After spending time with pigs, kids can also make pork sausages and eat them on the spot. [KOREA TOURISM ORGANIZATION]

As 2019 kicks off anew, there are only a few days until the beginning of the year of the golden pig on the lunar calendar, which is said to bring good luck and wealth along with it.

The Korea Tourism Organization has chosen places to go visit to fully enjoy pig-related activities throughout the country, including a street filled with pork belly restaurants and an exciting pig museum where young kids can run around with piglets and even hold them.

Plan your next trip and get ready to go hog-wild with family and friends to ring in the lucky year ahead.

Pig Park in Icheon, Gyeonggi is one of the country’s most exciting places to learn everything one could ever want to know about pigs. The first thing visitors notice is how clean and energetic the pigs at the park are, contrary to the stereotype that the animal is dirty and lazy.

At the entrance of the park, visitors will be welcomed by piglets as well as older pigs waiting to greet them and eat any snacks that may be available. The path continues to take people to the Pig Museum, inside of which all kinds of pig-inspired objects are on display. Thorough explanations of what pigs have meant to people throughout history make the museum visit equal parts entertaining and educational. After a tour of the museum, visitors will get to watch a herd of pigs following the park guards. These pigs run around looking for food provided for them on the ground, and the owner sometimes brings young piglets to young kids to pet or even kiss. The park also provides indoor performances for visitors to enjoy.

Although some may find it to be a bit cruel, the park also offers kids the opportunity to try out making their own pork sausages at one of the activities provided. When they are finished making their delicious treats, they can eat the grilled sausage on the spot as well. For more information, go to pigpark.co.kr or call (031) 641-7541 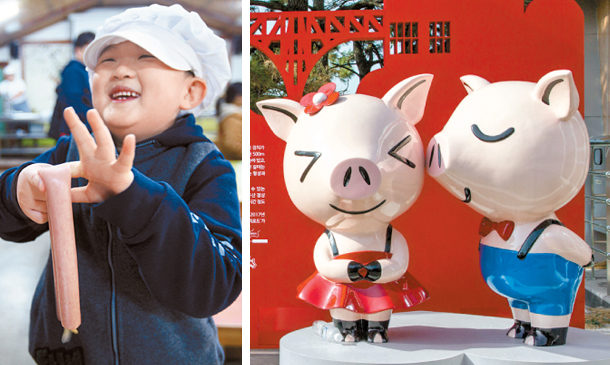 Left: A kid smiles with a sausage he made at Pig Park in Icheon, Gyeonggi. Right: Pig statues in Changwon, South Gyeongsang. [KOREA TOURISM ORGANIZATION]

Consistently named one of Koreans’ favorite dishes, samgyeopsal, or grilled pork belly, is always a tasty option for lunch, dinner or even breakfast. The smells and sizzling sounds of pork being grilled attract people to make the trek to Samgyeopsal Street in Cheongju, North Chungcheong.

One of Korea’s only streets specializing in samgyeopsal can be found in the city’s Seomun Market. After seeing its numbers drop when the city’s bus terminal moved to a new location, the market was rebuilt in 2012 and has taken on a pork theme throughout. Inside the market, there are about 15 restaurants that offer specialized menus featuring many varieties of the popular pork dish. The dominant style here is to cut the pork thick, dip the chunks into soy sauce, and then grill it. Each of the restaurants inside the market only offer local pork.

The popular dish which commonly accompanies samgyeopsal in almost any restaurant, a bowl of marinated pachae, thin strips of large scallions, is said to have originated in Cheongju. Here, people add aged kimchi, called mukeunji, to create the perfect bite. Each of the restaurants has their own distinct way of preparing the dish, such as grilling the pork over coal or serving the meat with mushrooms.

Another place worth visiting to eat pork is Namwon, North Jeolla. The area is known for its black pigs, which are known to have a softer texture than white pork when lightly cooked. Just like beef steak is often cooked to rare to medium, it is encouraged to eat the particular pork when it’s pink.

If you are looking to see some pigs in action, head down to Jeju Island. Hueree Park in Seogwipo is a folk village that highlights traditional life on the island. One of the most popular programs gives visitors the opportunity to watch black pigs riding down a slide. About 20 pigs walk around to get on top of the slide, and then take turns going for a ride. Children and adults alike can’t take their eyes away from the exciting scene.

After a day watching the pigs play at the folk village, visitors are usually ready to fill up their stomachs. One of the local delights of Jeju called gogi guksu, or meat noodles, is made with thick noodles (similar to the size of udon noodles) and pork. Opaque white broth provides deep pork flavors alongside the pieces of pork placed on top of the dish. Alongside the bowl of noodles, many go for the dombe gogi, a plate of steamed and sliced pork, in order to maximize their pork intake on the island known for its black pigs. For more information, go to www.hueree.com or call (064) 732-2114. 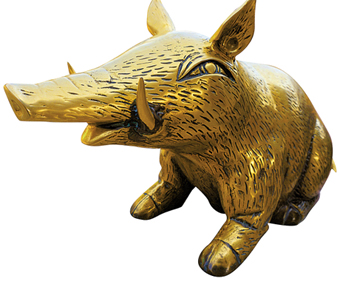 Pose with a pig

Bulguk Temple in Gyeonggi, one of the most well-known historical sites in Korea, discovered a gold-colored pig-shaped carving under the roof of one of the major buildings on its grounds in 2007, inspiring many to come and make wishes for prosperity. The temple named the pig “Fortune Pig” and even made a small statue in a more visible spot so that any visitor to the temple can take a look and even touch it. Even after 10 years, many local and international visitors make wishes at the pig statue.

Changwon in South Gyeongsang is also known for its relation to pigs. Dotseom, an island which is about a 10-minute boat ride from Masan Harbor, got its name from the old word dot, which used to mean pig, and the entire island looks like a pig from afar. On the island is a statue of a golden pig surrounded by water where visitors can take pictures. Another spot, Jeo Island, which is known for its skywalk, also has caricature-like pig statues for more picture-taking opportunities.