[FICTION VS. HISTORY] ‘Fengshui’ rearranges Joseon history: Choosing the perfect burial spot did matter, but it wasn’t worth fighting over

[FICTION VS. HISTORY] ‘Fengshui’ rearranges Joseon history: Choosing the perfect burial spot did matter, but it wasn’t worth fighting over 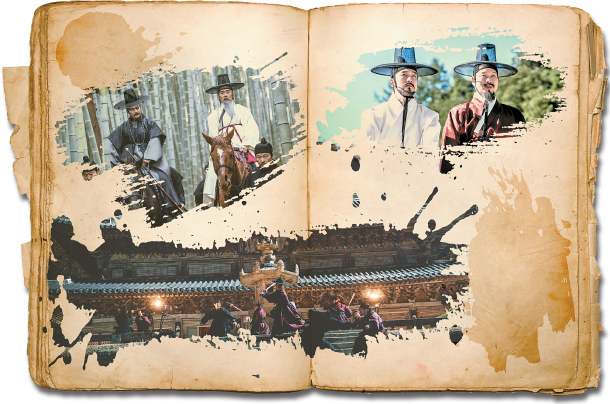 Above: The feng shui master Park Jae-sang, a fictional lead character, is played by veteran actor Cho Seung-woo, left, and his friend and business partner Koo Yong-sik, played by You Jae-myeong. Left: A scene from the film shows Byung-gi and Heungseon Daewongun, played by Ji Sung, fighting to secure the temple on Mount Gaya as it was named a propitious tomb site where two future rulers would emerge. [MEGABOX PLUS M]

On both the silver screen and television, the historical drama has never gone out of style. Fans of period dramas, both here and abroad, like to be transported to a different time and learn about the high dramas that swept up - or were put in motion by - our ancestors. Some like to see continuity with the past. Others like to see progress. Foreign Korea-philes may believe they can get a crash course in Korean history from such films. But all historical dramas create characters, add love stories, and conflate or invent events to make sure viewers don’t lose interest. Through “Fiction vs History,” the Korea JoongAng Daily attempts to distinguish fiction from fact in popular period dramas and films for clarification and to dispel any misunderstandings.

Pungsujiri is a Korean term referring to the East Asian art of geomancy, known in the western world by the Chinese term feng shui.

Koreans from long ago believed that it was important to find propitious tomb spots for ancestors so that descendants live in peace and prosperity. Historical records state that Doseon Guksa (826-898), a Buddhist monk who lived during the decline of the Silla Dynasty (57 B.C.-A.D.935), learnt feng shui in China and adapted the theories into Korea, creating its own unique form and ultimately influencing people like Taejo Wang Geon, the founder of Goryeo. The records also say that the tombs of King Taejong Muyeol and Gen. Kim Yu-sin of Unified Silla (668-935) were also carefully selected using Korean feng shui. These examples show how pungsu was a popular practice among the royals back in the day.

A recent period film titled “Fengshui” that hit theaters last September shows how obsessed Koreans were over finding a propitious burial site. It depicts people fighting over the perfect spot to bury their ancestors, which they believe directly affects the flow of where authority is directed. The story is set in the late Joseon Dynasty (1392-1910) during the rule of Heonjong (1827-49), the 24th king of Joseon. It was a stark time for the dynasty when the young king’s authority was hitting rock bottom as the Andong Kim clan was the one with political control over Joseon.

Directed by Park Hee-gon, the first scene of the movie shows Crown Prince Hyomyeong (1809-30) getting poisoned to death at the age of 20. The prince’s death is a fact, but him being murdered is fiction as historic records state that the prince died of an illness. But the poisoning scene was added to dramatize the conflict between the royal family and the powerful Kims.

In the film, Park loses his wife and a child after attempting to interfere with the Kim family’s plot to steal a propitious tomb spot from the royal family. Actor Baek Yoon-sik plays the powerful Kim Jwa-geun and Kim Sung-kyun plays Kim’s ambitious son. Both characters are real and the Kim clan did have political power and authority over Joseon during the time, but the Kims stealing the king’s tomb spot is pure fiction, as is the family secretly burying their ancestors in spots reserved for royalty.

The film also features Heungseon Daewongun, also known as Yi Ha-eung (1820-98), the great-uncle of young King Heonjong. The role is played by actor Ji Sung, who works with Jae-sang to interfere with the ever-expanding power of the Kim family. In the film, Yi is portrayed as an outcast who was criticized for his contemptible behavior despite his royal background. However, experts say there is no historical evidence to back that up.

What is true about Yi in the film is that he moved his father Namyeongun’s grave to a hill beneath Mount Gaya in Yesan County, South Chungcheong, after hearing from a feng shui master named Jeong Man-in, who also appears in the film, that the site is a propitious place where two rulers will emerge. 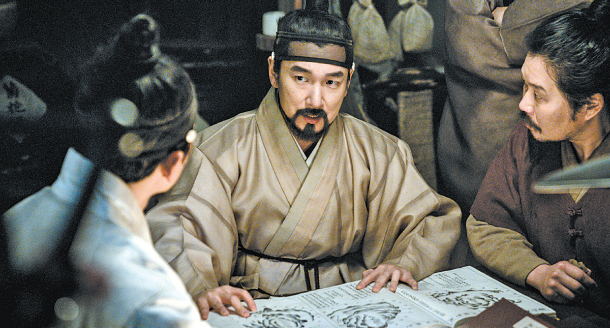 Feng shui master Jae-sang, center, discovers that the powerful Kim clan buried their ancestors in the kings’ tomb sites selected through feng shui to secure their power and authority. [MEGABOX PLUS M]

Indeed, Yi’s second son became Gojong, the 26th king of Joseon, and his grandson was Emperor Sunjong. In the film, it shows Yi mercilessly burning down the 1000-year-old Gaya Temple for his greed, diverging from the joint plan with Jae-sang, but whether Yi actually burnt the temple to secure the grave site is still debated. In the film, Jae-sang also prophesied that the spot on Mount Gaya will bear two rulers, but he tries to stop Yi, insisting that “Joseon will collapse” after the two kings. Joseon did collapse after Emperor Sunjong, but it is certainly not because an entirely fictional character predicted it.

Meanwhile, powerful Kim Jwa-geun’s greedy and ambitious son Byung-gi in the film kills his father after hearing from feng shui master Jeong of the propitious site on Mount Gaya. He kills his father and attempts to bury him there so that he himself can become king. This, of course, is fiction, and left many viewers complaining that the director’s search for drama ignored the significance of filial piety in Confucian society.

At the end of the film, Korea is under Japanese colonial rule, and Jae-sang appears as an old feng shui master helping a group of young independence activists who visit him for advice. They ask him to find them a spot to establish a military school to fight back against colonial rule. Jae-sang picks a spot and gives it a name, “Shinheung Military Academy.” The academy really did exist and did train Korean independence fighters, but there is no evidence to suggest that the spot was chosen using feng shui.