Restoration project not planning to restore much

Restoration project not planning to restore much 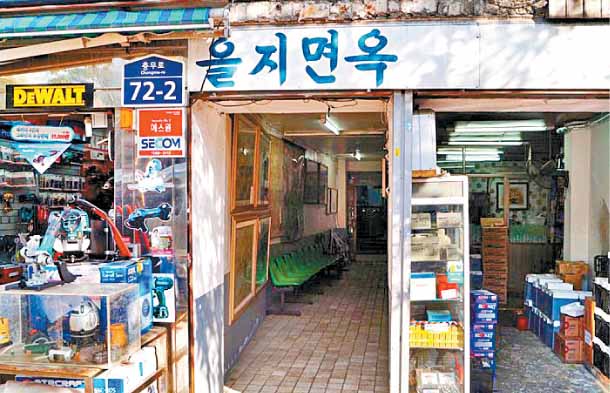 The entrance to Eulji Myeonok, a restaurant in Euljiro, central Seoul, that could be torn down as part of a controversial restoration project. [HAN EUN-HWA]

The Euljiro area in central Seoul is packed with old stores that have been passed down for generations, at least for now. The historic neighborhood could soon disappear due to a restoration project that will replace the local stores with skyscrapers.

One famous store due to be torn down is 33-year-old Eulji Myeonok, one of the top five Pyongyang naengmyeon, or cold buckwheat noodles, restaurants in Seoul.

“I have never agreed to the restoration project,” said Hong Jeong-sook, whose husband owns Eulji Myeonok. “My husband was born in this house, this region - how could we go to another place?

“We will carry on our business here until we are kicked out.”

The store has been doing business in its current spot since 1985. Eulji Myeonok’s history goes back to 1969, when a couple started the restaurant business. Their two daughters inherited the business and later launched Eulji Myeonok and Pildong Myeonok in Seoul.

Eulji Myeonok is hidden in an alley. From the main road, people can only see the mouth of the small alley that leads to the restaurant; although it is hidden between stores so it can easily be missed. This secrecy eventually added to the charm for the restaurant’s regular customers. 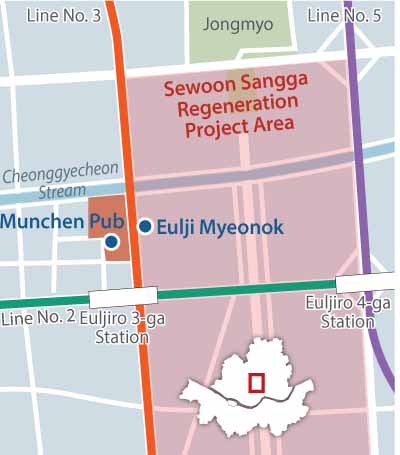 “Even if tall buildings come here and do business, would they have the same vibe and taste as we have?” said Hong. “Many ask us to open [in a new building], but Eulji Myeonok belongs to Euljiro,” she said with a hollow smile.

“We have nobody to hand down the business to, and these days, we just want to quit everything. For whom is this project for anyway?”

Eulji Myeonok will not be the only victim of the restoration. Other classic Euljiro restaurants like Eulji Dabang, Tongil jib, Yang Miok and Ansung jib all face the same threat.

Euljiro Nogari Alley, known for hosting the Korean version of Oktoberfest, will also partly be demolished due to the restoration project.

“Even if we put up a fence during the construction, I don’t know if we will be able to do business with a stall in the alley,” said Jeong Kyu-ho, the owner of Munchen Pub. “We have endured by holding on to our pride that we would develop this place for an attraction like Oktoberfest, but now the whole alley is in disarray due to the restoration project.”

Nearby Sewoon marketplace has been going through a similar urban renewal project since 2006. The site was once a go-to cluster of electronic stores in Seoul, and the renewal project is aimed at redeveloping a large area surrounding the market.

But in 2015, the Seoul metropolitan government launched a regeneration project, the “Re-Sewoon Project,” that aimed to pull in young artists and entrepreneurs.

One of the outcomes was “Sewoon Makers’ Cube,” where young artists were invited to open studios with reduced rent. It also built a “Maker Space” filled with tools like 3-D printers and laser cutters for young entrepreneurs to create prototypes. The aim was to create an innovative place to invigorate the manufacturing businesses in the area in preparation for the fourth industrial revolution.

Young artistic creators who entered the area back then are baffled that the city government’s restoration plan now seems to have turned into an all-out urban regeneration plan.

“I moved in to make use of the manufacturing technology at the Sewoon marketplace, but now all our partners are torn down and the building is the only thing left, like some kind of memorial.” said Jeon Yoo-jin, a media artist. “It is truly frustrating to see unprecedentedly talented manufacturing craftsmen disappear.”

Established artisans working in the area are also unhappy.

“What the government is doing is not restoration but redevelopment - the mayor is deluding the citizens,” said Lee Jeong-seong, an engineer for the late video art pioneer Nam June Paik.

Even local government sources confessed that they are confused by the approach.

“The Euljiro area is old, so redevelopment is a must. But the policy of the local government and its philosophy seems to be conflicting in how it would develop it,” said a source from the Jung District Office.

Against the backdrop, Seoul Mayor Park Won-soon announced at a New Year’s meeting with reporters held at Seoul City Hall in central Seoul on Wednesday that there will be revisions to the original plan in attempt to preserve the area’s heritage.

“In order for people to maintain their business and create their artwork in the city, we will re-examine the current situation completely and soon announce a new alternative,” said Park.

“All the buildings should not be removed. At least during my term as mayor, I am going to request that the plan be redesigned to conserve the city’s tradition, history and beauty.”