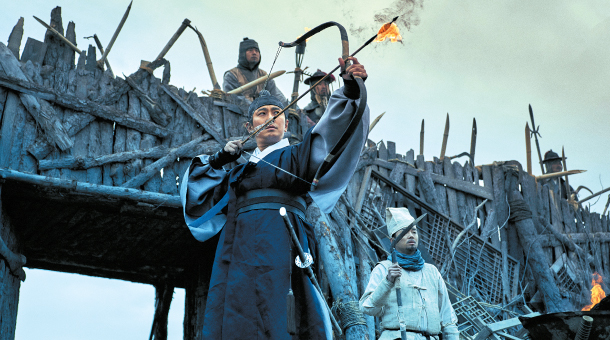 In Netflix’s upcoming original series “Kingdom,” Ju Ji-hoon plays a crown prince who has fallen victim to a conspiracy. [NETFLIX]

The highly-anticipated “Kingdom” debuts on Netflix this Friday. The series has garnered attention worldwide, and has been renewed for a second season even before premiering.

Written by Kim Eun-hee, who also wrote the popular tvN drama “Signal” (2016) and directed by Kim Seong-hun of the 2016 film “Tunnel,” the big-budget series is a zombie thriller set in the Joseon Dynasty (1392-1910). Starring Ju Ji-hoon, Bae Doona and Ryu Seung-ryong, the 6-episode genre mashup tells the story of “hunger,” according to the television writer.

Since zombies are only concerned with what they will eat next, Kim felt they were the perfect monster for the time.

“That period in history was grim, and people were treated unfairly by those with authority through taxes they had to pay. I wanted to depict that hungry and ragged period through the zombies,” Kim said at a press conference held in southern Seoul Monday.

Revolving around a crown prince (Ju) who has fallen victim to a conspiracy, the series follows him as he tries to unveil the evil scheme and save his people, who are being tormented by a strange plague that sweeps the country following the spread of a mysterious rumor of the king’s death. Ryu plays a corrupt and power-hungry politician with an ambition to take over the throne, while Bae plays the doctor’s apprentice who offers essential aide to the crown prince.

Inserting strange creatures into the past is not unheard of in the Korean entertainment world. Last year, “Rampant,” an action-packed period zombie flick starring Hyun Bin and Jang Dong-gun, and “Monstrum,” a period action movie featuring a gigantic mysterious monster, were both released in theaters. Both features were major flops at the domestic box office despite their big budgets.

However, the two films sold well abroad. “Rampant” was sold to 74 countries across Asia, North America and Europe. The film topped the box office in the Philippines and Vietnam. “Monstrum” was also sold to major film markets, such as those of the United States, China and Britain. 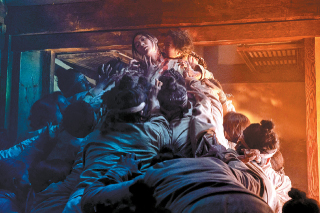 Outside of the mashups, Korea has proven successful with monster films. The 2016 zombie action thriller “Train to Busan” charmed both domestic and foreign audiences, and was a huge hit, selling more than 10 million tickets in Korea and was sold to more than 150 countries.

The sales of these films abroad prove the potential commercial viability of “Kingdom” internationally, according to film critic Kim Heon-sik.

“Zombie movies have grown to become a genre that people around the world enjoy. Although seeing zombies in the Joseon Dynasty could seem unrealistic to domestic audiences, mixing the familiar theme of zombies in an unfamiliar setting that viewers do not have much knowledge about could appeal to wider audience,” said Kim.

“Kingdom” could also bring about several positive changes in the domestic entertainment industry, paving new opportunities for creators and actors.

Netflix’s massive global footprint could offer new and easier ways for Korean actors to appear in Hollywood productions, since the service provides them the opportunity to be seen in nearly 200 countries, according to Kim.

It could also diversify film and television produced in Korea, according to culture critic Kim Bong-seok.

“In the past, major broadcasters had the initiative to produce [exciting] shows. But following the movement of big name creators to cable networks, audiences now have more diverse and unique options. The growing role of Netflix in the Korean entertainment industry could help further diversify what viewers are offered in Korea, and could improve the working conditions of creators, a chronic issue in the local industry.”

He added that “Kingdom” could also be “an optimal chance to show the world what Korea’s commercially viable contents are actually like, since most of the Korean titles that foreign viewers are familiar with are critically-acclaimed arthouse titles, like ‘Snowpiercer’ (2013) and ‘Oldboy’ (2003), directed by [the prestigious] filmmakers Bong and Park Chan-wook.”

[CELEB] Seo In-guk finally puts his signature look to use