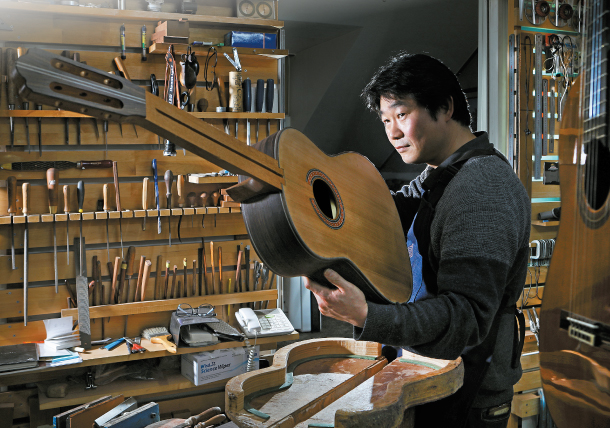 Uhm Hong-sik, a third-generation guitar maker, is at work in his studio located in Gwangju, Gyeonggi. [PARK SANG-MOON]

A guitar should be able to make about a thousand different sounds, says Uhm Hong-sik, a 47-year-old third-generation classic guitar maker.

Uhm has taken over the family business that was started by his grandfather Uhm Sang-ok (1914-97), known as Korea’s first classic guitar maker, during Japanese colonial rule (1910-45). Hong-sik’s father, Uhm Tae-hong was also known as a skillful master and handed down the secrets to his son.

At left is a guitar made by Uhm Sang-ok, grandfather of Uhm Hong-sik. Above is a guitar Uhm Hong-sik made in collaboration with DigiFun artist Ahn Seung-joon, who makes artworks with digital devices. [PARK SANG-MOON]

“Just as we tell talented singers that they have a thousand different layers of their voice, a good guitar should do the same and deliver emotive sounds to listeners.”

His guitars, according to reviews from active musicians, never stop being updated. Many internationally-known guitarists, such as Ukraine’s Marko Topchii, Bolivia’s Pirai Vaca and Chile’s Alexis Vallejos, play the guitars made with the skills handed down to this third-generation maker.

Uhm wasn’t always a guitar maker. After he graduated from college in 1998, he worked as an engineer at several global IT companies. He worked on developing software for Sanyo Telecom of Japan and Teleca of Sweden, and some of the projects on which he participated contributed to the sales of the then-popular 3G phones.

Thanks to his specialty developed in the expanding communications industry, his annual income exceeded 100 million won ($88,609) back in the early 2000s, which was higher than what the average office worker made at the time. However, while he was professionally successful, his quality of life had almost hit rock bottom. While he was focused on developing new software, he was barely able to spend time with his family or with his friends. He felt like he was just working as a cog in a machine, and did not feel like a human with a soul who could make decisions for themselves. 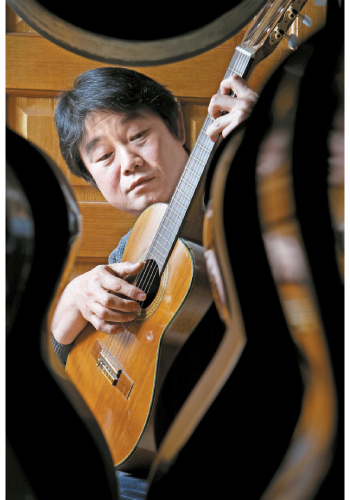 Uhm Hong-sik plays a guitar he made. [PARK SANG-MOON]

The moment he decided to learn the skills of his father and of his grandfather and take over the family business happened while he was working in Sweden. One snowy day, he watched his colleague arrive to the office in a tractor. He enquired why his colleague was driving such a big vehicle, and the colleague said he also takes care of a farm that was handed down from his father. The colleague went to work around 5 a.m. or 6 a.m., and then went home around 2 p.m. to be able to do both.

He then started thinking about people who strive to keep their family businesses, no matter how small or big they are. He was inspired by his co-workers after seeing how they valued their family businesses. Once that was in his head, he quit right away. His parents were fiercely against his decision, but his then-girlfriend, now-wife, encouraged him to stand by his choice if he was really sure about what he wanted to do.

In 2007, Uhm started to train in the art of guitar making. He dreamed about becoming a master who could make the world’s best guitar. His father trained him hard; before moving on to a new lesson, his father constantly pointed out the little details he missed. He was determined to absorb every detail he could so that he wouldn’t tarnish the business his father and grandfather had built.

The so-called Namdaemun Guitar, which his grandfather made in 1961, was made entirely out of materials found within Korea. He used an abandoned desk from a government building, as well as a pine tree that was over 500 years old. The tree was found during reparations to Namdaemun, central Seoul. The grandfather made three guitars with these materials: one was sold and the money from the sale allowed the family to purchase a place with two rooms; one belongs to Uhm and the third is missing.

Uhm Hong-sik, left, checks the thickness of a guitar, assesses the sound of a guitar he designed, right. [PARK SANG-MOON]

The late-grandfather’s guitars were popular among musicians in the ’60s and ’70s, and were known as one of the best musical instruments in Korea at the time. Musicians took turns borrowing the guitars to play and the competition was fierce. Uhm’s father Tae-hong took the guitar design in a new direction as a way to help the family business flourish. He focused on using the best guitar-making technology from overseas when he took over the business in 1965.

He applied technology learned from other countries so that he could make one-of-a-kind guitars for stage performances. He established a guitar-making studio, the first one opened by a private individual in Korea, which allowed him to spread his name as a guitar maker across the country.

Although the family’s guitar making skills have been handed down over generations of the Uhm family, the style of guitars each master makes is very different.

While the grandfather’s guitars have a warm and embracing sound, his son’s version has a cleaner and more refined sound. And now, with more musicians playing different instruments together on a larger stage, the sound coming from the guitar needed some tuning as well.

Uhm Hong-sik focuses on bringing out a sound that harmonizes well with other instruments like pianos and violins at large-scale performances. This is because he believes that the sounds of guitars may need to be updated and altered as the current generation of guitar players enjoys a new style of music.