[FICTION VS. HISTORY] A period drama that doesn’t always shoot straight: ‘War of the Arrows’ got the hardware right, even if it invented plot and characters

[FICTION VS. HISTORY] A period drama that doesn’t always shoot straight: ‘War of the Arrows’ got the hardware right, even if it invented plot and characters 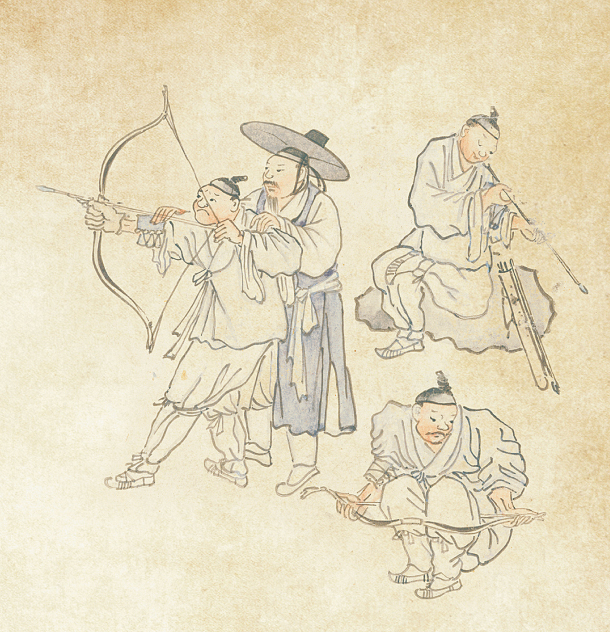 Koreans are archers. Many believe this skill is in their genes, having somehow been passed down generation after generation. Historical records state that the bow appeared for the first time on the Korean Peninsula around 5,000 B.C. and ancient Chinese referred to Koreans as the “people in the East who are masters of archery,” or dongyijok. Not only military men, but also scholars and even gisaeng (female courtesans) are said to have practiced archery, especially during the Joseon Dynasty (1392-1910).

Because of Korea’s mountainous topography as well as lack of financial power to afford mounted troops, Korean armies naturally were drawn to archery, according to historians. This is well portrayed in the period film “War of the Arrows” (2011), directed by Kim Han-min, which is set during the second Manchu invasion of 1636. The Qing invasion of Korea is regarded one of the most mortifying chapters of Korean history. The Qing forces reached Seoul in just five days, forcing King Injo of the Joseon Dynasty to take refuge in the Namhan Mountain Fortress. He conceded defeat by bowing his head down on the ground before Emperor Hong Taiji of the Qing.

Perhaps to show a more courageous Korean side, director Kim created a fictional story based on the invasion. The film tells the story of master archer Nam-yi, played by actor Park Hae-il, and his quest to rescue his sister Ja-in, played by Moon Chae-won, from the Qing Dynasty.

Despite criticisms that the story was fictional and that the movie was similar to the 2007 disaster flick “The Apocalypse,” “War of the Arrows” still attracted an audience of more than eight million, making it the biggest grossing Korean film of 2011. It won numerous awards in Korea, including the Daejong Film Awards and the Blue Dragon Film Awards, and was released in other countries including Japan.

Even if the main story is fiction, are there any other parts of the film that are historically true aside from the Qing invasion of Korea in 1636?

“War of the Arrows” (2011) tells the story of master archer Nam-yi, played by actor Park Hae-il, left, who attempts to rescue his sister from the Qing Dynasty led by Jyuushinta, the great commander of the Qing army, played by Ryu Seung-ryong, right. In the movie, center, the people of Joseon get dragged into the country’s defeat during the Qing invasion of 1636. [LOTTE ENTERTAINMENT]

It seems like director Kim did his research to depict the bows and arrows featured in the film. Those are true to the historical record.

In the film, the Koreans defend themselves against the Qing mainly using bows and arrows. Archery represented a significant part of the military service exam during the Joseon Dynasty. Recruits were tested in various areas and a majority of them were archery skills, according to the “Mugwa Chongyo,” or Records on the Military Service Exam, which is maintained in the Jangseogak Archives.

In close up scenes showing master archer Nam-yi fighting the Qing, audiences can see that he uses a weapon very different from those used by the Qing. This special bow and arrow was called pyeonjeon, also known as aegisal or baby arrow. Pyeonjeon is unique to Korea. Although pyeonjeon is a short arrow, it is shot using a longer bamboo arrow guide called tongah. This allows an archer to draw a short arrow but use it on a full sized bow. The arrow is lighter, faster and more aerodynamic. Since it is shot with a higher muzzle velocity, the arrow can travel farther and faster. Broken arrows could be recycled into short arrows, an advantage when supplies fell short. For all of these reasons, pyeonjeon was referred to as Joseon’s ultimate secret weapon.

In the film, Jyuushinta, commander of the Qing army (played by Ryu Seung-ryong), admires Joseon’s unique bow and arrow. In fact, historical records state that the striking ability of pyeonjeon was already well known in neighboring countries. It is said that when Joseon envoys made a visit to the imperial court of Ming and Qing, they were frequently asked to perform demonstrations of pyeonjeon shooting.

Archery was practiced by both military men and commoners. In the final part of the film, Nam-yi’s sister Ja-in, who looks like a fragile woman, takes a bow and arrow from her husband and makes a perfect shot that forces Jyuushinta to miss his shot. As can be seen in the painting “Shooting an Arrow” in the “Album of Genre Paintings” by Joseon-era artist Kim Hong-do, archery was enjoyed by the common people. Villages used to hold an archery event called hyangsarye, which was organized to maintain social order.

In “War of the Arrows,” one character is not fictional: Dorgon, or Prince Rui (1612-50), a Manchu prince and regent of the early Qing dynasty. Dorgon introduced the policy of making all Han Chinese men shave the front of their heads and wear their hair in plaits like the Manchus. To Koreans, he’s known as a cruel and merciless prince who plundered villages during the invasion. He took hostage of Crown Prince Sohyeon (first son of Injo) and Grand Prince Bongrim (second son of Injo), who were taking refuge on Ganghwa Island and forced King Injo to admit defeat.

In the film, Dorgon is played by Park Ki-woong as a vicious prince who tried to take advantage of Joseon women. He ultimately is captured by Nam-yi and burnt to death - which is totally fictional.