Government crackdown on dancing takes away all the fun: After Burning Sun controversy, bars and restaurants tell customers to take a seat

Government crackdown on dancing takes away all the fun: After Burning Sun controversy, bars and restaurants tell customers to take a seat 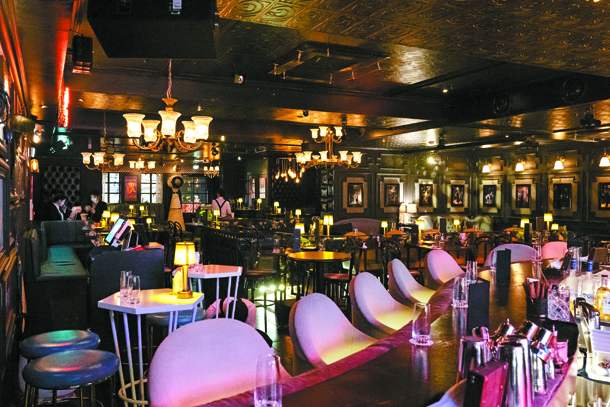 The inside of the popular bar Get All Right, which now bans its guests from dancing of any kind, even waving their hands while standing. [GET ALL RIGHT]

From the outside, Get All Right, a popular lounge bar in southern Seoul’s Gangnam District, sounded like it was hosting a lively evening on a recent Thursday evening. But after walking into the neighborhood hot spot, you would be forgiven for thinking that you had just stepped into the wrong place.

The trendy bar, which is usually filled with customers dancing along to upbeat music as they drink, was eerily relaxed. There was no one standing by the bar or anywhere else inside. Instead, everyone was seated.

If they were feeling the beat of the music, seated customers were allowed to groove along with their hands, shimmy their shoulders and bob their head along to the beat. Anything more, and they would quickly be approached by men in security uniforms who would firmly remind them to sit down. Afterwards, the guards would disappear against the wall, where they were nearly invisible.

The muted ambience was not because the bar suddenly became opposed to people having a good time. It was due to the Gangnam District Office’s crackdown on businesses registered as a “general restaurant” allowing their customers to dance. A general restaurant, according to the Ministry of Food and Drug Safety, is where food and alcoholic beverages are sold and dancing is prohibited.

Similar scenes were found at other bars in Gangnam District on a Saturday. People were seen lining up outside the entrance of an underground bar that was surrounded by security guards.

A customer, who wished to remain anonymous, assumed that the bar would be packed, but when she made her way inside, there was almost no one standing and a screen inside the bar displayed the warning “Please do not dance.” 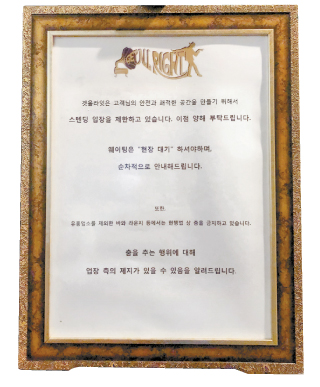 A sign outside of Get All Right, a bar in southern Seoul, explains that customers may be asked to stop dancing. [LEE SUN-MIN]

Police officers later entered the bar, the lights turned on and the music turned off in order to prevent people from dancing. The customer said that some policemen were seen taking photos inside the bar.

“Why is it not okay for us to dance voluntarily to music? It is so weird,” the customer said.

Terry Kim, one of the owners of Get All Right, felt equally perplexed.

“Is it possible to forbid someone from dancing if they are excited? What year do we live in?”

He posted a petition on the Blue House website on April 5 asking for a change to the regulation that limits restaurants from allowing their customers to dance. So far over 1,400 people have signed the petition.

Since the controversial Burning Sun nightclub was discovered to have been registered as a “general restaurant,” in what many speculate was an attempt to avoid paying higher taxes, the Ministry of Food and Drug Safety and district offices across the country have begun a nationwide crackdown on businesses allowing customers to dance the night away. The ministry says that general restaurants are not allowed to provide any entertainment facilities such as a stage, workers assigned to individual guests or disco balls. If bars want to provide those services, they must be registered as “entertainment bars” and pay more taxes, according to the ministry. The Gangnam District Office, which oversees many neighborhoods that are home to bars, clubs and pubs, has investigated 27 businesses, and five of them were found to have violated the law.

“We don’t have a karaoke machine [and] we don’t have any female entertainers to serve guests, we just play the music a bit louder so that customers can have more fun,” argues Kim, adding that what bars do currently should fall under the category of “a general restaurant,” yet the only thing that stops them from being a general restaurant is dancing. His bar is one of the businesses that the Gangnam District Office investigated. When officials visited the bar a couple of weeks ago, they saw people dancing and told the business that if they didn’t stop the dancing, they would be forced to shut down.

“It is not like we are trying to evade taxes, and it is just impossible to pay more taxes,” Kim argues, adding that even if he wanted to register as an “entertainment bar,” he couldn’t do so because his bar is not located in a legally designated commercial area. He explained that many streets in the southern Seoul neighborhoods of Garosu-gil or Apgujeong, which people generally regard as commercial areas, are actually not — legally speaking.

According to the law, commercial areas are mostly found along major streets, not in alleyways where one could find both residences and small businesses.

“Small bars where you can start to build a type of culture can never do anything, and only the bars located in tall buildings along major roads can play music and serve alcoholic drinks? That means customers can only go to karaoke businesses inside large buildings or go to large, multiple-story clubs or room salons where entertainers serve you to enjoy drinks while dancing?” said Kim.

He argues that more district offices should follow in the steps of Mapo District in western Seoul, where businesses with the “general restaurant” designation can allow their guests to dance.

The district, which is where several neighborhoods known for their nightlife, including the area around Hongik University, decided to add an exception to the Food Safety and Drug Ministry’s law in 2015 that allows guests to dance around their seating area. Creating a designated dance floor still remains illegal under the district’s exception. So far, 41 restaurants in the district operate under this designation.

Officials at the Gangnam District Office say that it is difficult for them to set up a similar exception, considering that small bars and pubs are dispersed throughout the district, and they may face opposition from neighborhoods if they change the rules.

Even Mapo District, which took the initiative to loosen the restriction for some restaurants, struggled to define exactly what dancing is. Some district officials across the country have pointed to the difficulties of enforcing the law.

“Isn’t casually dancing at a lounge bar or even soju pubs different from dancing [suggestively] at a club?” said one district official who has been following the issue, stating that he was sharing his personal opinion and not the government’s.

“When you watch a big sports game at a bar all together, for example the World Cup, and people dance out of happiness after the game, can we really interpret that as dancing? Isn’t it just celebrating? It is very difficult to define what dance is.”

The Ministry of Food and Drug Safety says although it is cracking down on these businesses, it is simultaneously having conversations with bar owners and managers to learn what their concerns are. It originally planned on wrapping up the investigation last month, but officials decided to extend it. It has not announced when it will wrap up the investigation, but once it is complete, it plans to release what it has found to the public.

An official at the ministry explained that, under the current law, if a person wants to run a bar where guests are allowed to dance, they should look for locations and buildings that can host those businesses, instead of complaining about the regulations.

“It’s a choice the business owner should make,” said the official. “If there’s any data indicating that the ministry needs to review the regulations, we will do so, but at the moment, nothing has been decided because we are still investigating the situation.”