Seoul gets ready to light up the night: The annual Lotus Lantern Festival welcomes everyone to join in on the celebration

Seoul gets ready to light up the night: The annual Lotus Lantern Festival welcomes everyone to join in on the celebration

Visitors to the Lotus Lantern Festival’s parade walk the route with their lanterns. [LOTUS LANTERN FESTIVAL]

These days, the night sky doesn’t get completely dark on the streets of central Seoul’s Jongno District, especially those streets near Jogye Temple, thanks to the upcoming Lotus Lantern Festival, also known as Yeondeunghoe.

The festival, which is said to have occurred annually for the past 1,200 years, is held to celebrate Buddha’s Birthday, which falls on May 12 this year, and spread the importance of keeping traditional culture alive across generations. The event has been named the country’s intangible heritage No. 122.

Organizers hope the event facilitates cooperation among communities, especially since making lanterns and putting them up along the streets requires many people to work together simultaneously.

This year’s festival bears the theme of “World Peace” in the hopes that Buddha’s teachings about mercy might contribute to bringing peace to the Korean Peninsula and help resolve conflicts around the world. In honor of the festival, organizers will hang carefully crafted lanterns along Cheonggye Stream in central Seoul that will be on display from May 3 through 12. Each light will be made with traditional Korean paper known as hanji, showing the many different uses and durability of the material that was frequently used for lanterns in the past. Those who can’t make it to Cheonggye Stream, Bongeun Temple in Gangnam District, southern Seoul, will also have an exhibition of bright lanterns to enjoy.

The festival’s major event, the annual Lantern Parade, will take place on May 4. Beginning at 7 p.m., those who want to join the parade and walk the streets of central Seoul while holding their own lanterns will get together at Heunginjimun, more commonly referred to as Dongdaemun, and make their way to Jogye Temple. Many different organizations participate in the parade and bring along elaborate lanterns of their own, which are usually made to convey wishes for the upcoming year. Some are shaped like the letters of the Korean alphabet to spell out messages, while others walk with lanterns shaped like their favorite cartoon characters.

At the end of the parade near Jogye Temple, those who have walked the entire parade route will gather together to show off their excitement by dancing and singing all through the night. 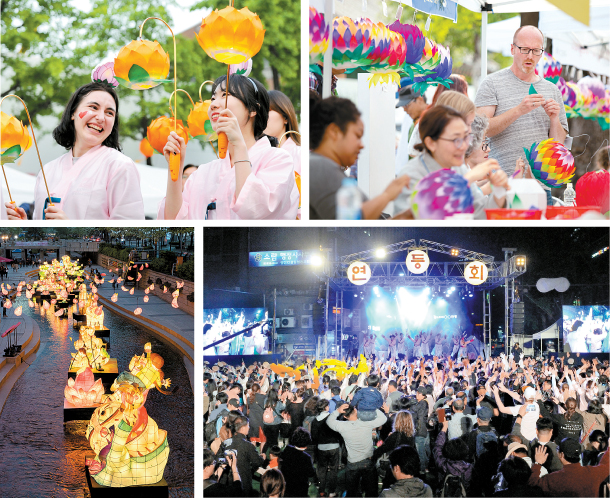 Foreign tourists, above, enjoy last year’s Lotus Lantern Festival. From May 3 to 5, visitors can make their own lanterns and join the annual parade that takes place on May 4. Large lanterns, left, are on display alongside Cheonggye Stream in central Seoul. The lantern festival, below, also puts on a variety of performances to entertain visitors. [LOTUS LANTERN FESTIVAL]

On May 5, which also happens to be the Children’s Day holiday, festival organizers will host events to provide visitors with the chance to taste different types of food often consumed at temples. There will be many different programs at the event, and they will be divided into six different categories: Youth, International, NGO (nonprofit organization), Food, Tradition, and Sharing. Families can use the festival as an opportunity to have a fun and educational day together.

There will be many performances put on throughout the day, as well as a class for foreigners to learn how to make lanterns. The classes will be available at 11 a.m. and 2 p.m. For more information about participating in a class, email idia.seoul.@gmail.com or call (02) 722-2203.

To make the festival appeal more to international visitors and expatriates in Korea, the organizing committee has trained 60 volunteers from 26 different countries, including 20 from Korea. Besides helping foreign visitors navigate the festival amid the hustle and bustle of central Seoul’s Jongno area, they will be using their own social media accounts to promote the festival to the global community.

The Lotus Lantern Festival, also known as Yeondeunghoe, runs from May 3 to 5 on the streets in front of Jogye Temple in Jongno District, central Seoul, and nearby roads in the district. To get to Jogye Temple, go to Jonggak Station, line No. 1, exit 2, or Anguk Station, line No. 3, exit 6. The Lantern Parade will be held on May 4, starts from Heunginjimun, or Dongdaemun at 7 p.m. and wraps up around 9:30 p.m. when the crowd arrives at Jogye Temple. To get to the beginning of the parade route, go to Dongdaemun Station, lines No. 1 or 4, exit 9 or 10. For more information about the festival and its events, go to www.llf.or.kr or call (02) 2011-1744. The website is available in six different languages besides Korean, including English, Japanese, Chinese, French, German and Spanish.