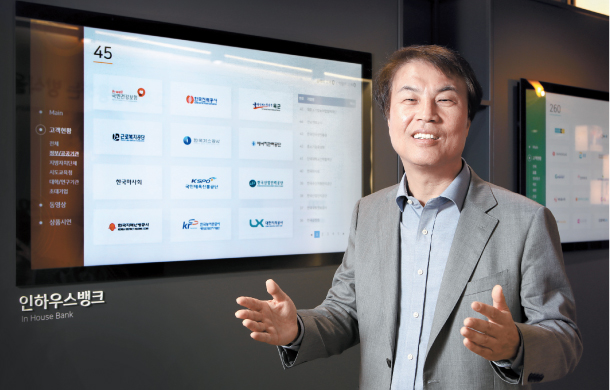 Shoeboxes of receipts and messy spreadsheets were the inspiration, as were expenses scribbled on the back of envelopes and salaries being paid manually by harried HR departments.

Seok Chang-kue, a former banker, seeing the big troubles caused by simple bookkeeping, founded Webcash in 1999. The company develops and sells enterprise software that simplifies and digitizes the process of recording expenses and payments.

The company is now listed and has hundreds of employees. Seok, the CEO, said that overseas expansion is the future for Webcash Group. It is set to expand to Vietnam and Cambodia in the first half of next year.

A large portion of the proceeds from the initial public offering on the Kosdaq market in January will be used for the expanding beyond the company’s home turf. 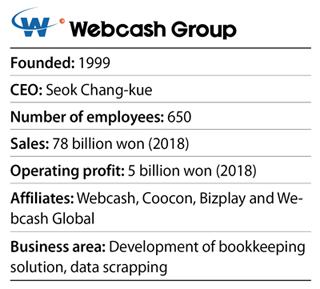 Korea JoongAng Daily sat down with Seok to discuss the business and the future direction of Webcash.

Q. What are the major businesses of Webcash?

A. Webcash Group is a business-to-business (B2B) fintech company with four affiliates. Webcash focuses on the development of solutions for bookkeeping at companies of different sizes. Coocon is an IT service company specializing in data scraping, while Bizplay provides services related to the recording of business-related expenses of employees. Webcash Global is responsible for the overseas business of Webcash’s products, selling and promoting the services in target countries such as Vietnam, Cambodia, Japan and China.

The growth of the Kyungrinara platform, which is designed to facilitate bookkeeping at small and medium-sized companies, has been impressive. It was sold to more than 10,000 companies within two years of its launch.

What do you think is the primary reason for the success?

I think the main reason is that there has been unmet demand - especially at small and medium-sized enterprises - for processing the paperwork related to business transactions, ranging from invoices and money transfers between corporations to payroll management. I noticed that the vast majority of smaller companies record data with Excel, which takes a lot of time. Besides the time issue, the method is susceptible to errors as users input the numbers.

But with Kyungrinara, or Wabooks in English, the documentation is digitized as the software is linked with corporate banking accounts. The software also incorporates money transfer functions so it can directly link a bookkeeper to a partner company’s bank account without them filling in numbers. So our product can actually reduce the tasks that take four to five hours to the matter of 10 minutes.

How has Wabooks been doing in the domestic market?

Presently, 13,000 companies are signed up for the platform and an average of 50 companies buy the software every day. But I think the growth potential is huge because there are still around 800,000 companies categorized as small in size in Korea. We will keep expanding the user base to capture more customers. In exchange for installing the Wabooks, the corporate client pays 700,000 won ($604) initially and 54,000 won monthly.

What are the functions that set Webcash apart from other similar programs?

The major difference comes from the ability of Wabooks to actually handle financial transactions - not just allowing the recording of them. Within the software, users can send and receive money in addition to checking the financial status of the company in real time. When there is no such function, a bookkeeper must input the payroll and bank account numbers one by one when they remit salaries to employees.

But now, they can send the payment in bulk, significantly reducing the time and effort needed for the work.

Are there any other products or services besides the Wabooks?

Yes, we have tailored solutions depending on the type and size of the companies. “In-house Bank” does the same work as Wabooks, but it is for public institutions. So, we have more than 400 public corporations as clients, including the city government of Busan, the National Health Insurance Service and Korea Electric Power Corporation. A platform called “Branch” is designed for large corporations.

Webcash has established branches in Cambodia and Vietnam. Can you explain more about the overseas business expansion plan?

Broadly, Webcash plans to enter three to four Southeast Asian countries first starting this year and through next year and then go to the United States and Japan possibly within two to three years. This is because the Southeast Asian countries tend to impose fewer regulations than advanced economies like the United States. We have already acquired a software company in Vietnam to run operations there.

In the overseas markets, the major target will be companies with overseas branches in Vietnam. Those units are typically small, but the headquarters might want to know the financial transactions there in a more transparent way.

In Japan, we might take advantage of the network and resources that Coocon has established. Coocon entered the market by forming a joint venture called MJS with Japanese accounting firm Miroku.

Do you have any plans to add other business segments beyond bookkeeping solutions?

No, not really. I think Webcash is good for our existing business model. So, I’d rather focus on extending the use of our product lines to companies both at home and abroad rather than venturing into a whole new area.

In cooperation with the Korea International Cooperation Agency (Koica), Webcash has developed a center in Cambodia to offer a select number of trainees the opportunity to learn new skills. What led you to offer such a program?

I believe that the success at Webcash is helped not only by our workers but also by the society and community that we are in. So I thought it is meaningful if Webcash could contribute to educating young people in a developing country.