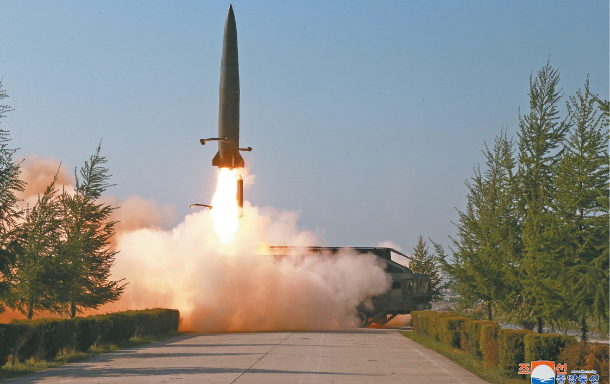 A short-range missile is launched from Kusong, North Pyongan Province, on Thursday, with North Korean leader Kim Jong-un observing the test, in a photo released by the North’s Korean Central News Agency Friday. It is believed to be a version of Russia’s Iskander missile, being launched from a transporter erector launcher (TEL). [YONHAP]

“The successful drill of deployment and strike designed to inspect the ability of rapid reaction of the defense units in the forefront area and on the western front fully showed the might of the units,” KCNA said.

Seoul actually refrained from using the term missiles for the North’s earlier tests, which took place Saturday. After Thursday’s launches, it admitted that the North fired missiles, rather than using the term “unidentified projectiles.”

But the Blue House remained reluctant to agree with the U.S. assessment that the North fired ballistic missiles.

“We didn’t notice a U.S. announcement [about the ballistic missiles],” a senior presidential official said Friday. “As far as we understand, the U.S. government has not made public its official conclusion.”

A missile is a guided, self-propelled weapons system, and they come in two forms - cruise and ballistic missiles.

A cruise missile flies with constant speed to deliver a warhead at a target over a long distance with high accuracy. Cruise missiles are capable of traveling at supersonic or high subsonic speeds and flying on a non-ballistic, extremely low-altitude trajectory.

A ballistic missile is launched on a ballistic trajectory to deliver one or more warheads. It follows the path of a ball thrown upwards, which depends on gravity to strike the target. While shorter-range ballistic missiles stay within the earth’s atmosphere, longer-ranged ones, such as intercontinental ballistic missiles, travel well outside the atmosphere.

Ballistic missiles are considered harder to intercept. The North conducted its last intercontinental ballistic missile test in 2017 and claimed that its range was capable of reaching the U.S. mainland.

Under UN Security Council resolutions, North Korea is banned from firing a ballistic missile. Cruise missile tests, however, are not prohibited.

Rep. Ahn Gyu-baek of the ruling Democratic Party, chairman of the National Defense Committee of the National Assembly, said Friday that further analysis is necessary to identify what the North fired.

He also questioned the U.S. assessment. “They seem like [ballistic missiles] because of the shapes and the transporter erector launcher [used for the test], but they flew at a depressed trajectory,” Ahn said. “It is also hard for the United States to make the distinction from far away, and the observation made in Korea may carry some differences.”

The South Korean military also refused to say that the North fired ballistic missiles. “All we can say right now is that they were short-range missiles,” a military official said Friday.

“It is nothing more than just a playing with words to say they were short-range missiles rather than ballistic missiles,” said Gwon Myeong-guk, former commander of the Air Defense Artillery Command. “The government is repeatedly downplaying the North’s provocations.”

Experts said the government, military and ruling party are intentionally downplaying the level of provocations to avoid damage to its diplomatic campaign with Pyongyang.

“The Moon administration just managed to gain a concession from the United States to send food aid to the North,” said Shin Beom-chul, head of the Center for Security and Unification at the Asan Institute for Policy Studies. “Seoul is worrying that opinions at home and abroad will turn against the plan if it turned out that the North had violated UN resolutions.”

Seoul said two short-range missiles were fired Thursday, but the photos released by KCNA showed that the North Korean military fired missiles - whether ballistic or not - and other types of artillery. The North fired 240-millimeter (9.4-inch) multiple rocket launchers and a new type of self-propelled artillery, the photos showed.

The North’s photos show at least six projectiles, including two missiles, were fired.

“It seems that the government is trying to be considerate toward the North with conservative assessments,” Shin said. “But the North is publicly releasing photos of their exercises and embarrassing the South.”