Visitors to Mount Seorak wait in line to buy tickets at the office. While the entrance fee to the National Park has been lifted, visitors still pay a fee because of the cultural heritage sites. [KIM HONG-JUN]

A long line forms to buy tickets for the Sinheung Temple in Mount Seorak, which lies 800 meters (2,624 feet) away from the admissions gate. But some people complain because they don’t plan to go to the temple. Hikers have to pay for the tickets just because the gate is located at the starting point of the walk, and temple visitors and hikers share the road for a while.

Similar scenes play out in mountains where ticket offices for the cultural heritage sites are located close to hiking trails, such as ticket offices near Beopju Temple at Mount Songni and Ssanggye Temple at Mount Jiri. The controversy about paying admissions fees for hiking public trails has evolved along with the country’s national park system over the decades. 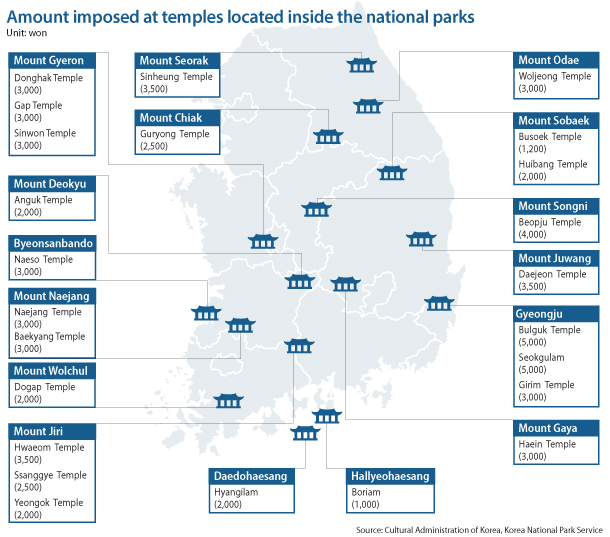 Based the regulations set up to protect cultural heritage sites, temples have been able to collect on ticket sales since 1962. After that, mountains where the temples were located started to be designated as national parks, and Mount Jiri was the first.

From 1970, national parks also started to impose entrance fees. At ticket offices, mostly at the base of the mountains, fees for entering the area and viewing the cultural heritage sites have been imposed together. There wasn’t any particular problem until the government decided to stop collecting entrance fees to national parks in 2007.

Visitors to mountains assumed that entering the national parks would then be free of charge, but that wasn’t true since the cultural heritage “viewing” fee was still imposed. At the time, the government planned to remove all fees, but the temples resisted by threatening to shut down the gates to the mountain trails altogether.

Members of the Korea Alpine Federation argue that imposing a cultural heritage fee on hikers who don’t plan on visiting cultural sites should be stopped. [YONHAP]

Hikers at parks where the trail head is located close to temples started to complain.

There are about 66 complaints posted on the Blue House site regarding national parks. The Anti-Corruption and Civil Rights Commission analyzed all the complaints regarding the national parks last year, and found that about 38.8 percent of all complaints were about the fee collection at the ticket offices.

While the debate is still ongoing, Cheoneun Temple at Mount Jiri decided to lift the entrance fee of 1,600 won ($1.36) late last month. The fee had been imposed since 1987 on all cars traveling to Nogodan at Mount Jiri, the gate situated about 1 kilometer (0.6 miles) away from route No. 861.

After the temple failed in a lawsuit - where the People’s Solidarity for Participatory Democracy sued in 2000 for the return of wrongfully acquired profits - the temple started in 2011 to collect an “entrance” instead of a “viewing” fee.

“The past government made military roads on territory owned by Cheoneun Temple, and later used it as road for tourism,” said Jonghyo Sunim, the chief monk of the temple. “We had to collect fees to protect the cultural heritage and keep the environment from deteriorating, but we wanted to give back to the country and the nearby neighbors before the Buddha’s Birthday.”

A talk was held to discuss the lifting of the fee, the setting up of a hiking trail to Cheoneun Temple, establishing businesses for the temple as well as other subjects. A person familiar with the discussions said the cost will total about 4.5 billion won.

But the fee very much depends on where you start. If the visitors decide to take a route that avoids the temple, then they don’t need to pay the fee, even if they walk by the temple on their way down the mountain.

“The controversy over the fee for the viewing of cultural heritage is a waste of energy,” said Cho Woo, professor at Sangji University’s tourism department. “The government needs to present the standard for what makes cultural and natural heritage and try to find the basic solutions by having public debates.”

What the monks say

The temples argue that it is impossible to move the ticket office close to the entrance of the temple due to National Park regulations, and they need to continue collecting the fees as it is difficult for them to afford costs associated with preserving and managing cultural heritage sites. They also said that the ticket is not only for the temple site and artifacts, but also for enjoying the nature in the areas owned by temples.

“Temples and the nature are inseparable,” said Kang Shin-kyum, professor of Chonnam National University’s Graduate School of Culture, adding that developing new trails and renovating old ones as well as efforts made to preserve the natural environment will all go back to benefit the general public. “Support to the privately-owned areas inside the national park should be understood in a way that take into account the general public.”

Chief monk Deokmun of Hwaum Temple said 30 percent of the ticket prices go to financial reserves and more than 50 percent of the amount goes to pay for people who work on preserving the cultural heritage, electricity and other fees to keep the area clean.

“Wherever you go in the world, viewing fees are imposed in order to preserve cultural heritage,” said the monk, adding that the country cannot provide 100 percent support and made it possible in 1962 for the owner of the cultural heritage site to impose a fee.

“The sense is to harmonize the culture with the natural environment, the traditional temples are more than just cultural heritage.”

Civil rights organizations argue that it is not appropriate to use the same ticket offices for national parks and temples. Jeong In-cheol, managing director of National Park Conservation Network, said that the ticket office should be moved to the entrance of the temple.

“The problems comes from how one manages territory,” said Jeong. “While the [temple’s] territory is protected by laws that protect cultural heritage and natural parks, the temples only focus on exercising their rights.”

He argues that he does not deny the need for the cultural viewing fee. For a short-term solution, he suggests moving the ticket office to the mountain closer to the entrance of the temple. For a long-term plan, he argues that the government needs to buy the land currently owned by temples and other private citizens, and start to impose the entrance fee to national parks again.

“For example, people who go farther inside Mount Seorak should pay more, while those who want to stay near to the ticket office pay none or less,” said Jeong, adding that heavy users of the parks should shoulder more of the burden.

He also worries about the lifting of the fee at Cheoneun Temple, although he is happy that conflict is gone.

“The method was wrong, as it was done with money,” he said, adding that the deal was negotiated with the Blue House, as the Jogye Order tends to deal with the presidential administration rather than working with the ministries.

What other countries do

The situation is a little different in Japan, as temples that collect fees are mostly located in the heart of the cities where hikers rarely collide with those coming to enjoy the national parks. There are 34 national parks in Japan. The United States has about 14 national parks that collect entrance fees, but there’s no such fee for “viewing” cultural heritage as there is almost none existing in the parks. In Europe, most cathedrals tend to open the facilities for free, except for when they are raising money for construction or renovation, or collect fees to enter certain parts of the cathedral such as a museum inside, the roof or the bell tower. Villages and farms are part of national parks in Europe as many countries view them as culture to protect. Residents are encouraged to go about their business.