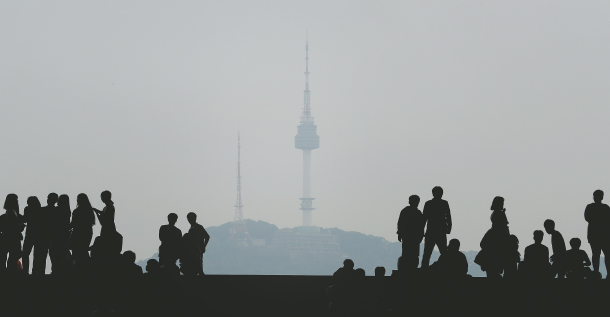 N Seoul Tower on Mount Namsan, central Seoul, is obscured by polluted air as seen from the National Museum of Korea in Yongsan District on Wednesday. The concentration of fine dust and micro dust in Seoul early in the morning was classified as “bad.” [NEWS1]

Out in the middle of central Seoul’s Gwanghwamun Square on Tuesday, trying to swallow a bite of food was a deeply unenjoyable experience. As cars drove by, it was increasingly difficult to breathe and only after inhaling a can of oxygen were diners able to exhale comfortably. After a few breaths, people were able to relax, but it didn’t take long to feel suffocated again and for people to be desperately reaching for their oxygen cans again.

The Korea Peace Energy Center held a special dinner event on Tuesday to have people experience how painful it can be to try dining while the air is filled with fine dust and micro dust.

“It is an experience I don’t want to have ever again,” said National Assembly member Lee Un-ju in her remarks at the event. While explaining her experience, she said that she will fight to improve the nation’s air quality in the National Assembly.

The dinner was put together to raise awareness of the many health issues that can be caused by micro dust and fine dust in the future, while arguing that people should be guaranteed the basic human right of being able to breathe fresh and clean air.

After some periods of “extremely bad” air over the past few years, people seem to be becoming immune to “bad” levels of fine dust and micro dust, and have started to pay less attention.

About 300 people gathered for the event to discuss the current “airpocalypse.”

“We can choose what water to drink, but we cannot choose what air we want to breathe in,” said Ban Ki-moon, former secretary-general of the United Nations who was recently appointed head of the National Climate Environment Conference, in a video message. 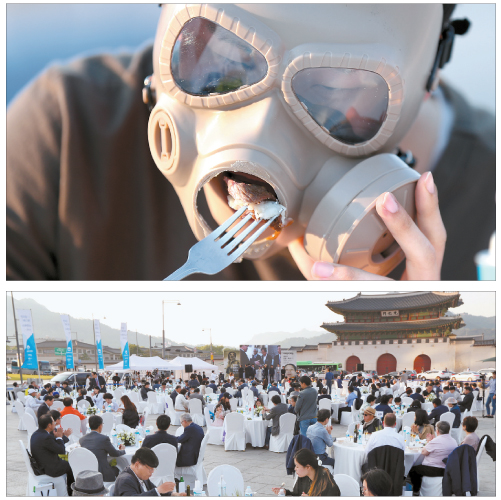 Top: Cha Ju-hwan, a 24-year-old college student, eating dinner while wearing a military-grade gas mask. Above: About 300 people gathered to eat dinner while being exposed to fine dust and micro dust, at an event put on by the Korea Peace Energy Center. [YONHAP, BYUN SUN-GOO]

Fine dust levels were “average” on Tuesday, but the smoke and fumes coming from cars driving by was more than enough to experience what it is like to be exposed to bad air for a long period of time.

The dinner - a shrimp salad, bread, beef and some grilled vegetables - was prepared by Yunga Myeonga, a Korean restaurant run by chef Yun Koung-suk. During the event, Yun shared that she has respiratory problems that often get worse depending on the weather.

To demonstrate a scene in which people may have to pack something more serious than a small mask with a filter, organizers also had three volunteers eat dinner at the event while wearing military-grade gas masks used in case of chemical gas attacks.

“This is so painful,” said Cha Ju-hwan, a 24-year-old college student who ate from a hole in a gas mask. “I have been wearing this for about an hour. I have not imagined a life where I have to wear this mask, and I absolutely don’t want to, and I keep on feeling the urge to just take this mask off.”

He added that the fact that he had an oxygen can with him at least gave him some comfort.

The event was held to announce the formation of a forum where experts from different fields of society - including energy, economy, commercial industries, politicians as well as people suffering from respiratory issues - come together to come up with solutions to fight the worsening situation.

“A very extensive discussion is needed to understand the issue and [come up with ideas to make the situation better], such as the reason why fine dust has become an issue in East Asia and how it travels, whether we need to encourage more use of renewable energy to make the situation better, how people should change their consumer behavior and even how to make diplomatic relations stronger,” said the center.

To discuss how to fight the bad air situation, the Korea Peace Energy Center will have a weekly seminar for nine weeks beginning on May 23.

The goal is to come up with scientific solutions or policies that can contribute in making the current situation better. A final report will be sent to legislative bodies and other government authorities as well as some embassies in Korea.

Ban Ki-moon is the speaker for the first seminar. Seminars will be held every Wednesday at 6 p.m. until July 17, and will include dinner.