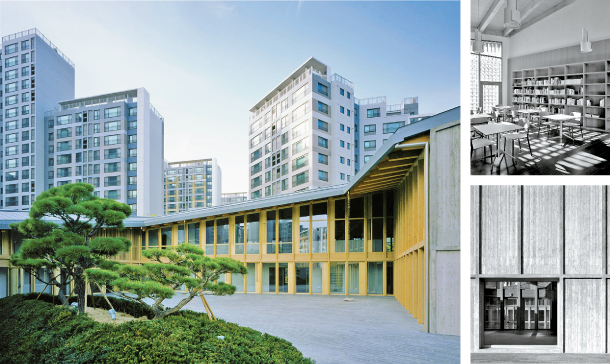 After a long wait, the Embassy of Switzerland in Seoul has finally opened its new hanok-inspired building to the public this week.

The new “Swiss House,” as the diplomats affectionately call it, is the first embassy building in the country to put a modern spin on Korea’s traditional architectural style known as hanok.

True to tradition, the horse shoe-shaped wooden structure is built around a spacious central courtyard, known as a madang in Korean. Pine and ginkgo trees are planted in the yard and around the periphery of the embassy, adding greenery to the otherwise light brown and grey building.

Inside, the windows are large and wide, letting in plenty of natural light to illuminate the offices and meeting rooms. The lofty ceilings expose the building’s wooden skeleton and are artfully decorated with accessories like white paper lamps.

What is perhaps most striking is the contrast between the embassy building and its neighbors. High-rise residential apartments surround the parameters of the embassy, which is only 12 meters (39.4 feet) at its highest point.

The 2,300-square meter (24,756-square feet) plot of land on Songwol-gil in Jongno District, central Seoul, has been home to the Swiss Embassy since 1974. Facing space restraints and general wear-and-tear, the embassy decided to demolish its original building and build a new one. As the embassy began plans for reconstruction, the Seoul government’s so-called “New Town” project to revamp neighboring residential areas was also in full-swing, completely transforming the landscape in a matter of two or three years.

The new ultra-urban neighborhood was a force to be contended with, admitted Nicolas Vaucher, lead architect at Burckhardt+Partner SA, which took charge of the construction project together with Korean partner Erae Architects & Engineers. Burckhardt was selected out of around 70 entrants in a competition to design the embassy.

“The first time we came to see the site in Seoul, the high-rise buildings were not there, but only small traditional houses around the embassy plot,” Vaucher said at a press briefing on Thursday.

“This great metamorphosis [of urbanization] was a big change. We had to find a correct answer for such a context […] Our idea was to create a figure that reminds us of the former houses [in] the previous neighborhood by adopting a house shape that belongs more to the park and the topography.”

While the aesthetics of the embassy may appear to be rooted in tradition, the architects assured that sustainability standards and safety measures of the building were up to date.

“It’s compulsory in Switzerland to create new buildings with high sustainability concerns,” said Vaucher. “We take the heat from the roof with solar panels and we have geothermal energy from the ground with 38 pipes […] We also recover the rainwater from the roof to a tank.”

To celebrate the grand opening, the embassy organized a series of music and dance performances showcasing Swiss and Korean art traditions throughout the week.

It kicked off Korean and English guided tours of the new building on Wednesday, and also held a special concert by a Swiss quartet, inviting residents of neighboring apartments.

“This new embassy is not an empty shell,” said Swiss Ambassador Linus von Castelmur. “It’s a platform and a tool and we will use it to do many things […] and be very active partners with Korean society.”