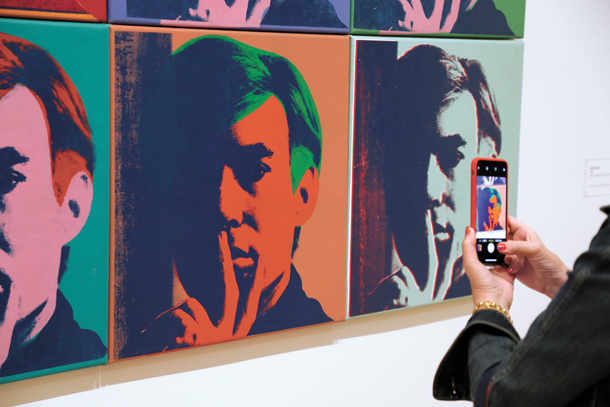 A woman records one of a series of self portraits at the exhibition, “Andy Warhol - From A to B and Back Again,” at the San Francisco Museum of Modern Art. [AP/YONHAP]

SAN FRANCISCO - Before Instagram and Facebook, before selfies and filters that perfect selfies, there was Andy Warhol, using his art to imbue friends, family, celebrities - even himself - with a certain mystique.

A retrospective of Warhol’s work on display in San Francisco captures the artist’s ability to use paintings, drawings, photographs and other mediums to create buzz-worthy personas the way people do now using social media.

The idea of personal branding, “of how we can be who we want to be,” was something Warhol was trading on more than a half-century ago, said Donna De Salvo, deputy director for international initiatives and senior curator at New York’s Whitney Museum of American Art, where the exhibit originated. “He had a real understanding of something about American culture, which is now more global.”

“Andy Warhol - From A to B and Back Again” opened this week at the San Francisco Museum of Modern Art and runs through Sept. 2. It includes more than 300 works spanning Warhol’s 40-year career.

The show features some of the artist’s most iconic creations - depictions of Campbell’s soup cans and Brillo boxes, for instance, and silk screen portraits of Elizabeth Taylor, Marilyn Monroe, Elvis Presley and others - along with lesser-known pieces from his early and later years. It next travels to the Art Institute of Chicago.

“Warhol is constantly labeled a pop artist, but all that happened within three or four years, and then he moved on and the work goes quite dark and explores questions of gender and sexual identity, fame, subcultures,” said Gary Garrels, Elise S. Haas senior curator of painting and sculpture for the San Francisco museum.

The show’s title comes from Warhol’s 1975 memoir in which he touches on key themes from his work, such as celebrity, money and love. The artist died in 1987 at age 58.

De Salvo said the San Francisco museum’s team “really enlightened me in terms of thinking about Warhol through the lens of social media.”

It’s a common thread throughout the show.

“When you see some of the rooms, particularly the portraits, we really conceptualized it in a way of thinking about Facebook,” she said.

Warhol’s understanding of the power of images to create identity and aura can be traced to his early years, after he moved to New York in 1949 and got a job as a commercial illustrator. He did work for publications such as Mademoiselle and Glamour.

“That idea of marketing and all the things we take for granted was just something Warhol was immersed in,” De Salvo said. “And he was just such a sponge in his capacity to absorb things.”

In 1963, he was commissioned to do his first portrait, of modern-art collector Ethel Redner Scull.

The artist took Scull to a photo booth in New York, gave her a stack of coins and said, “Pose,” Garrels said. She took 300 pictures, looking playful, pensive and everything in between.

“From that, he makes this painting,” De Salvo said: “Ethel Scull 36 Times,” a brightly colored montage of images that anticipated modern-day selfies and Instagram posts.