At five, DDP proves its worth by not fitting in: Design center proved to be everything its area was not - namely, new

At five, DDP proves its worth by not fitting in: Design center proved to be everything its area was not - namely, new 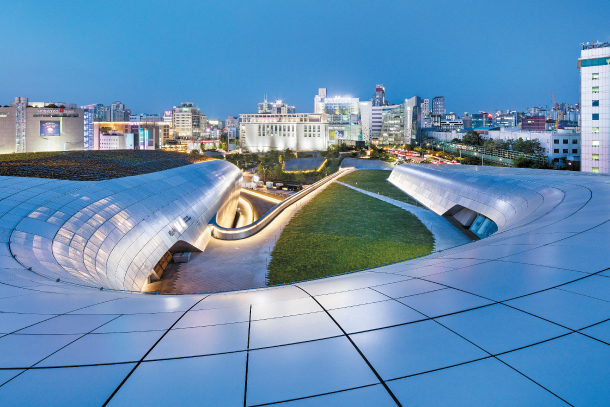 The roof of the Dongdaemun Design Plaza (DDP). The roof was initially meant to be open to the public, but had to be closed off due to safety risks. [SHIN KYUNG-SUB]

“Be careful on the roof. You shouldn’t come up if you’re afraid of heights.”

Last Thursday, on a particularly hot May afternoon, staffers at Dongdaemun Design Plaza (DDP) in Seoul had the unusual task of helping reporters into helmets and harnesses ahead of their climbs onto the top of the unworldly structure.

It was the first time that anyone beside DDP personnel had the chance to walk on the structure’s roof since the building opened in 2014. As it happens, the original design intended public spaces on the roof, which ended up being too hazardous. During the tour, the press was taken to DDP’s other hidden spaces, like the basement control room, where staff monitor 450 CCTVs around the clock, and the electrical room, which controls around 100 million won ($84,350) worth of electricity every month used by the complex.

The press tour was the first of several tours organized to celebrate DDP’s 5th birthday. Two other tours, which were open to the public, were so popular that all 44 spots were booked in less than six minutes after reservations were accepted.

The massive 85,000-square-meter (910,000-square-foot) building designed by the late Iraqi-British architect Zaha Hadid has emerged as one of Seoul’s most recognizable landmarks.

In its first five years, DDP has been home to 186 exhibitions and 478 events while serving as a regular venue for important cultural festivals, like Seoul Fashion Week. More recently, DDP was transformed into the main press center for the 2018 Inter-Korean summit and hosted BTS’s global press conference earlier this year. A total of 42 million people are estimated to have visited the building.

The Seoul Design Foundation opened up areas of Dongdaemun Design Plaza, central Seoul, that are usually closed off to the public during a series of tours last week. At left is the space immediately below the roof, supported by hundreds of different-sized beams. At right is a space in the building’s basement that is connected to the outside through a narrow opening. [SHIN KYUNG-SUB]

Finding acceptance by both the architectural community and the masses wasn’t guaranteed, of course. DDP was alien in every regard. It was built by a foreign architect in a historically-significant location: the home of Dongdaemun Stadium, a key sports center from 1925 that was deeply rooted in the memories of most Seoul residents. It didn’t help that DDP looked like it was from outer space as its cold, metallic exterior contrasted with the traditional - a charitable way of saying run-down - buildings in the vicinity. In a 2013 survey, 100 of Korea’s architects and design critics ranked DDP fifth on a list of the worst modern buildings to be constructed since Korea’s independence in 1945.

DDP’s reputation has dramatically improved. Some of its new neighbors reflect its futuristic look. The nearby Hotel the Designers Dongdaemun branch, for example, boasts a gold chain mail-like exterior, making one wonder if such a bold architectural attempt would have been possible in the area if it wasn’t for DDP.

“Architects always talk of architecture that adapts to its surrounding context, and they’ve said that DDP ignores the surrounding context. But somebody needed to say that buildings unworthy of being replicated don’t need to be, and that’s what Zaha Hadid did,” said architect Yoo Hyun-joon during an interview with the Seoul Design Foundation, an institution associated with the Seoul metropolitan government, which manages DDP.

“I think DDP is a good building for the next 100 years,” he added. “It’s worthy to remain because a lot of work went into it, and structurally it shows cutting-edge design.”

On June 6, DDP will kick off the “Hello, My name is Paul Smith” exhibition in partnership with London’s Design Museum, and display over 1,500 artworks and possessions of the famed British designer. DDP is also going to revamp the lawn that hosted its famous artificial LED rose garden, which became a romantic backdrop for numerous Korean dramas.

Seoul Design Foundation officials also hinted it may open up the rooftop and some of its unused basement areas.

“DDP is a global landmark,” said Park Jin-bae, who is head of the complex’s space management team. “We want the public to get a special experience in seeing the heart of DDP. Regular tours are not ruled out in the future.”