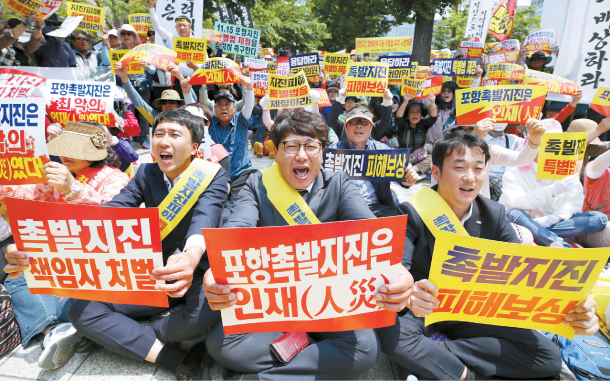 Residents of Pohang, North Gyeongsang, stage a rally in front of the National Assembly in Yeouido, western Seoul, on Monday to call for a special act to compensate victims of the earthquake that hit the city in November 2017. It was the second-strongest earthquake ever recorded in Korea. [NEWS1]

Around 1,000 residents of the North Gyeongsang city of Pohang rallied in front of the National Assembly on Monday to call for a special act to compensate victims of the earthquake that hit the city in November 2017.

A number of international experts recently concluded that the earthquake was likely triggered by the government’s geothermal power experiments in the area.

“The estimated economic cost to citizens from the earthquakes are said to be around 14 trillion won [$11.8 billion],” said Gong Won-shik, a member of a civic committee of Pohang residents. “We have been waiting for the government to take action regarding the quake that has destroyed our lives and dreams, but the government has approached the issue with a lukewarm attitude.”

The committee said that some residents who lost their homes in the quake have been living in shelters for over a year.

“What we need today is a special act to be legislated to pinpoint the faults and responsibilities so that the residents can be assisted in returning to their lives before the quake,” Gong said.

A 5.4-magnitude earthquake, the second-strongest ever recorded in Korea, hit Pohang on Nov. 15, 2017, displacing nearly 1,800 people and injuring 135. The Bank of Korea said the earthquake damaged some 57,000 structures and the Ministry of the Interior and Safety said it will cost around 144.5 billion won to restore the structures.

Mayor of Pohang Lee Gang-deok said at the Asia Forum 21 conference in Daegu last month that the total damages were worth around 14 trillion won, counting the infrastructure damages, movement of residents out of the city due to trauma, drop in real-estate prices in the area and loss of interest by companies in opening offices in Pohang.

“We are living on the edge, but the government is not acting,” Lee said in the conference. “Now that it’s become clear that it was a man-made disaster, the government can pass a law to compensate the victims, but they are continuing to pass the buck, avoiding responsibility.”

An international research group led by the Geological Society of Korea announced in March that the quake in Pohang in November 2017 was likely triggered by the government’s geothermal power experiments.

The group analyzed 520 earthquakes in Pohang, North Gyeongsang, from January 2009 to November 2017, of which around 240 took place within three miles of a site where the Ministry of Trade, Industry and Energy were experimenting with the Enhanced Geothermal System (EGS), a technology that turns geothermal power into electricity and involves the fracturing of hot underground rock with pressurized liquid, known as hydraulic stimulation.

According to the group, there were at least five hydraulic stimulations from the EGS experiments that significantly disturbed faults in the area, which, in turn, triggered the Pohang earthquake in November 2017.

The research was ordered by President Moon Jae-in after public concerns were raised over the possibility that the EGS experiments in Pohang conducted since 2010 may have cause the quake. After the group’s announcement, the Ministry of Trade, Industry and Energy said it accepted the results “with humility.” It said it will shut down EGS experiments in Pohang and inject 225.7 billion won over the next five years into reconstruction work in Pohang.

Some 1,200 residents of Pohang and the surrounding areas sued the government for compensation last year. Rep. Lee In-young, the floor leader of the ruling Democratic Party, apologized for the delay in pushing for the special act on compensation.

“As soon as I became floor leader [in early May,] I wished to visit Pohang and listen to the needs of the residents, but we were tied down at the National Assembly with its latest happenings,” Lee said in a meeting at the Assembly with some members of the Pohang civic committee. “We agree that the Pohang quake was a man-made disaster that the government needs to take responsibility for.”

“Yes, there has been an announcement by the ministry to pay for some reconstruction work, but we also see that it does not cover enough of the damages,” Lee said. “So at the Assembly, we will have to determine the supplementary budget to support the residents. Again, we understand the needs of the people of Pohang and the immediacy of the issue, and we apologize for the delay at the Assembly.”

“I’ve seen how some residents still have no homes when I visited Pohang in March,” she said in the meeting. “It is the LKP’s position to push for the special act to compensate the victims. We will try to push for its passage at the Assembly within June.”