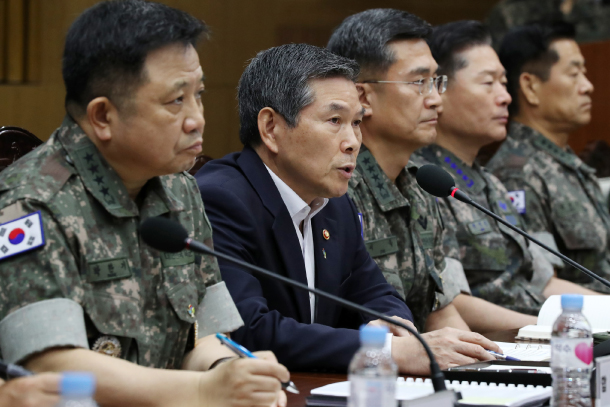 Defense Minister Jeong Kyeong-doo, second from left, speaks during a meeting of commanders of the Joint Chiefs of Staff, Army, Navy, Air Force and Marines at the Defense Ministry in Yongsan District, central Seoul, on Wednesday. Jeong vowed to look into the maritime border surveillance system after a North Korean fishing boat crossed into South Korean waters undetected. [JANG JIN-YOUNG]

The South Korean military failed to detect a North Korean boat that freely sailed in its waters for four days - even after its crew moored in an eastern harbor and asked to use a phone, the JoongAng Ilbo learned Wednesday.

The military also faced fire for an obviously false initial announcement about how the wooden boat and its four crews were discovered in Samcheok Harbor in Gangwon on Saturday. After questioning, two of the crew defected to the South, while the other two returned to the North through the border village of Panmunjom on Tuesday.

“We questioned the four crew and they said they left Kyongsong in North Hamgyong on June 9,” a military official told the JoongAng Ilbo on Wednesday. Kyongsong is a county located south of Chongjin.

According to the source, the boat crossed the eastern Northern Limit Line, the inter-Korean maritime border, on June 12. The 1.8-ton boat was 10 meters (32.8 feet) long, 2.5 meters wide and equipped with a 28-horsepower engine. It traveled 500 kilometers (310 miles) from Kyongsong to Samcheok.

According to the source, the crew pretended that they were fishing. They crossed the maritime border at 9 p.m. on June 12, the source said. By 6 a.m. on June 13, they reached 56 kilometers northeast of Ulleung Island, but the ship started drifting around 8 p.m. due to weather conditions. They decided to head to the nearest shore, the source said.

Although their movements were recorded by closed-circuit television cameras of the Gangwon Provincial Maritime Affairs and Fisheries Office and Coast Guard, the authorities did not notice that the ship was from the North. 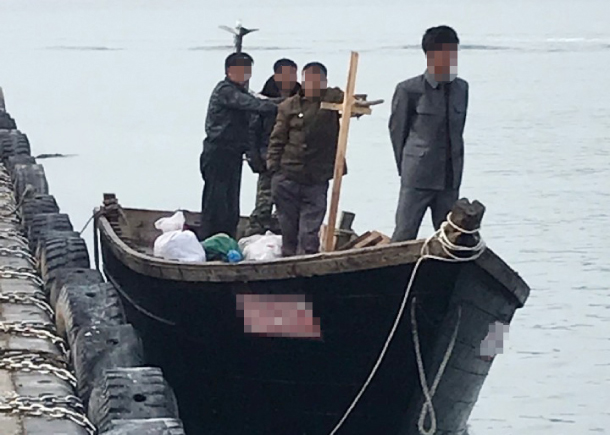 Around 6:50 a.m., a resident stumbled upon the crew. One man was wearing a North Korean military combat uniform and another was dressed in a Mao suit. The other two were dressed in working clothes.

One of the four men approached the resident and said they were from North Korea. “I want to borrow your mobile phone to call my aunt, who is living in Seoul,” he allegedly told the resident.

It was then that the resident made a call to police and the government became aware of the North Korean visitors.

Those facts were wrong. The ship’s engine did not fail and its crew managed to dock in the harbor undetected by the Navy and Coast Guard.

Two of the crew were sent back to the North on Tuesday according to their wishes, the Ministry of Unification said Tuesday, while the remaining two expressed a wish to defect to the South.

The military source admitted Wednesday that ship sailed in South Korean territorial waters freely for days, although maritime border patrols have stepped up.

“Since late last month, the number of North Korean boats operating near the Northern Limit Line to fish squid increased, so we beefed up patrols in the eastern waters,” the source said. More military ships, maritime patrol aircraft and helicopters have been operating in the area, he said.

Another government source told the JoongAng Ilbo that the boat’s route was recreated based on the crew members’ testimonies. Apparently, a South Korean maritime patrol aircraft did approach the North Korean boat and got within 4 kilometers. “We are investigating if it just flew by, although the ship was detected,” he said.

The Navy’s P-3 maritime patrol aircraft are equipped with high-definition optical cameras. The system is meant to detect periscopes of enemy submarines.

Minister of National Defense Jeong Kyeong-doo said Wednesday that the military must take the situation more seriously. “We must review the patrol operation thoroughly, and those responsible will be held accountable,” he said.

At a meeting with key commanders, the minister also admitted that the military had failed to stay vigilant. “Before blaming aging equipment, we need to tighten our discipline to strengthen our readiness,” he said.