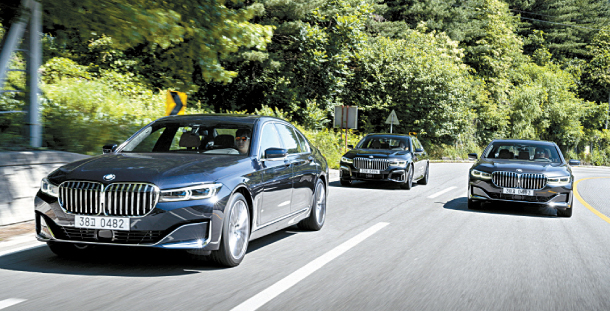 GAPYEONG, Gyeonggi - BMW Korea unveiled a face-lifted version of its flagship 7 series on June 26, looking to score a win in its ongoing battle with Mercedes-Benz.

Although BMW made some innovative design changes to appeal to its target customers - affluent professionals in their 30s and 40s - it seems clear that history is set to repeat itself, with the new 7 series being defeated and losing the sales battle against its German rival on Korean soil.

For the most part, the product lacks the refinement consumers usually seek when shelling out more than 100 million won ($85,000) for a vehicle.

The vehicle certainly has its strong points. Four years after releasing the sixth generation 7 series, BMW made a bold design shift in its flagship lineup. Surprising, considering the conservative reputation of German automakers when it comes to face-lifts.

The iconic kidney grille is 50 percent larger on the latest model, while headlights are now sleeker, conveying a sense of motion.

Even the air breather inspires a sense of speed.

The horizontal tail light, a stylized line running the width of the car, suggests that the automaker is not living in the past and is looking to keep up with, even lead, the trends.

Not much changed in terms of interior because BMW didn’t have to make any changes. The leather-covered seats and dashboard made me feel appreciated and welcomed.

But design is one thing. Comfort and accessibility are another matter.

On June 26, I drove and rode in the 740Li xDrive Design Pure Excellence trim of the latest 7 series for a total of 150 kilometers (93 miles), from Grand Walkerhill Seoul hotel in Gwangjin District, eastern Seoul, to Gapyeong, Gyeonggi, and back again.

Only a few seconds after accelerating along the road was it clear that it would not be the most comfortable of rides.

I shifted left to right, tilted backward and forward again, trying to find the best position, but didn’t get it right until we completed the course.

Performance-wise, the 740Li was excellent.

Making sharp turns and shifting lanes on the way to Gapyeong almost made me forget that the model was a large-sized sedan 5.26 meters in length, 1.9 meters wide and 1.48 meters in height. The 2-ton 7 series model had no problem maintaining balance, even when we had to make dramatic shifts and slam hard on the brakes to avoid accidents in heavy traffic.

That being said, the morning of June 26 was not the best day to test out the explosive power of the 740Li. The model is rated at 340 horsepower and can reach speeds of 250 kilometers per hour (155 miles per hour) with up to 45.9 kilogram-meters (332 pound-feet) in torque.

A crowded road with heavy traffic was not quite right for such a fine piece of engineering.

After taking a coffee break in Gapyeong, I moved to the “chairman seat” in the back for a chauffeur-driven experience inside the 740Li.

Even while traveling curvy roads around mountains, the back seat was comfortable and secure enough to make me feel like, well, a chairman. If they so desire, passengers can recline the seat and almost completely lie down, like in a business-class airline seat.

Tablet PCs installed behind the driver’s seat and the passenger seat were responsive, and the music played through the display system - although the automaker only offered unaccompanied Johann Sebastian Bach cello suites - was clear and pleasant.

With the sunroof open, reflections on the screen from sunlight made it hard to test out more of the tablet’s features. The response of the navigation system was somewhat delayed, but as this technological deficiency is common in imported vehicles, the minute lag was not much of a surprise.

The headrest also felt a little uncomfortable, and it was evident after 10 minutes of use that the additional massage feature on the two back seats was not for me.

The bottom line: Customers with enough money to buy the new face-lifted BMW 7 Series might opt for Mercedes-Benz’s sixth generation S-Class series, as the price of the two prominent luxury sedans are about the same.