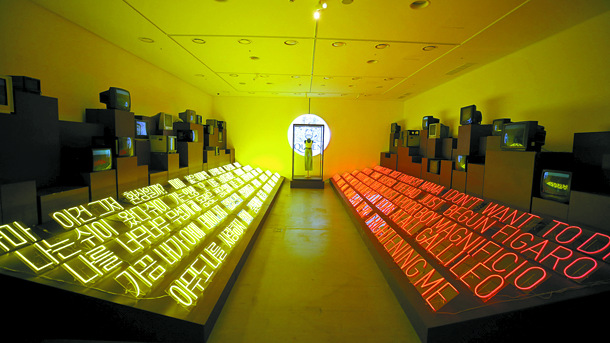 The “Bohemian Rhapsody” room displays colorful neon signs of the song’s lyrics in Korean and English. [THE QUEEN EXHIBITION]

Last year, Queen biopic “Bohemian Rhapsody” swept Korea like a fever, as nearly one-fifth of the population headed to theaters to watch - and sing along with - Freddie Mercury as he rocked the world with his groundbreaking hits.

Although the film is no longer in theaters, a new exhibition in Seoul is refusing to let the magic die. “Bohemian Rhapsody: The Queen Exhibition,” now being held at the Ara Art Center in Jongno District, central Seoul, is a colorful show of paintings, media and installation works by artists inspired by the legendary British band. While it is co-hosted by the band’s management company and charity organization, the “Bohemian Rhapsody” exhibit comes from the minds of two Korean artists looking to connect the band with younger audiences.

“This all started when fellow artist Seo Jung-won and I decided to send a proposal to the Queen website for an exhibition,” said Kim Hyung-kyu, who’s curating the exhibition alongside Seo, at a press briefing ahead of the show’s launch last Friday. 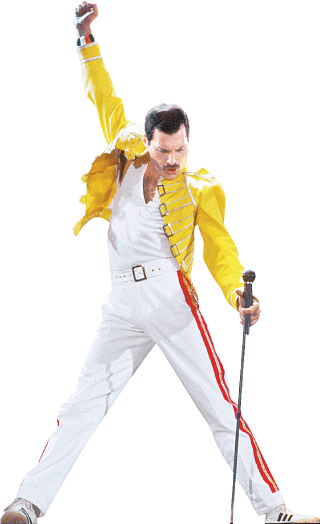 “A lot of exhibitions about artists just showcase archives or memorabilia, but given that the film ‘Bohemian Rhapsody’ was a huge hit with the youth, we proposed doing a more modern show that would be accessible to them,” he said. “Thankfully, Queen Productions head Jim Beach found our idea interesting and we were able to open our exhibition in just three months.”

With dozens of Instagram-friendly spots, interactive elements - including grand pianos and sing-alongs - and the band’s most recognizable hits blaring throughout, the exhibition is a shameless attempt to continue the Queen craze.

The different rooms of the exhibition are each themed around a different Queen song and feature works by Kim and Seo, as well as Kim Mul-gil, GR1, Choi Eun-jeong, KAY2 and Jack Coulter.

The exhibition begins on the art center’s first basement floor with a room dedicated to the song “Bohemian Rhapsody,” where colorful neon signs displaying both Korean and English lyrics of the hit are juxtaposed against TV sets playing its music video. The “Love of My Life” room attempts to recreate Mercury’s room as depicted in the film.

The “Under Pressure” and “Killer Queen” rooms on the second basement floor display colorful yet chaotic paintings and installations that spotlight the social and political confusion that characterized the times when the songs were released. On the third basement floor, the room for “We Will Rock You & We Are the Champions” plays the two songs through several different speakers that each showcases a different instrument or vocal sound. The “I Want to Break Free” room features large-scale inflatable balloons of a stylized Mercury character along with displays of his favorite items like Stolichnaya vodka. 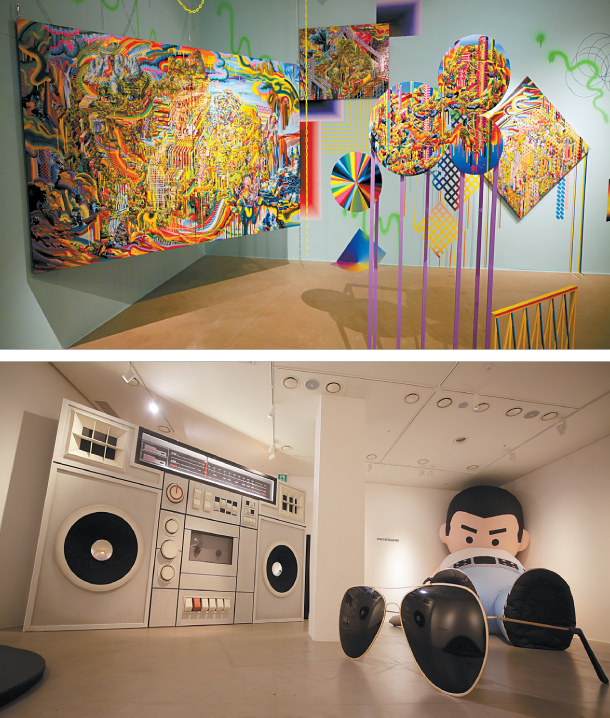 Top: The “Under Pressure” room at the “Bohemian Rhapsody” exhibition presents a colorful, yet chaotic painting by Choi Eun-jeong. Above: The “I Want to Break Free” room features large inflatable balloons of a Mercury character alongside the singer’s favorite items. [THE QUEEN EXHIBITION]

On the last basement floor, “Radio Ga Ga” recreates the band’s famous Live Aid concert stage with a grand piano and hosts a painting by Coulter, a British artist who experiences sounds visually due to a condition called synaesthesia. “Don’t Stop Me Now” holds archive materials like Queen’s album covers and handwritten lyrics. The room also features the glamorous outfits worn by the band’s late lead singer and by actor Rami Malek in the 2018 film.

Early on, the exhibit has faced some criticism, mainly from visitors who took to personal blogs to post unfavorable reviews about their experience. One of the most frequently cited complaints pointed to loose finishing touches - “Isn’t it wrong to print descriptions of the artworks on A4 paper?” posted one blogger. Others were disappointed with the prominence of footage of the film rather than of the band itself.

Nevertheless, “Bohemian Rhapsody” did earn the blessing of Queen drummer Roger Taylor, who sent a picture of himself holding up a congratulatory message to the exhibition staff.

While the exhibition has been described as a “world tour” exhibition by organizers, no further dates or locations have been fixed for the show outside of Korea as of yet.

“A Japanese group that’s maintained good relations with Queen contacted us and showed interest in the exhibition, and a team in Singapore also sent us inquiries,” said Kim Hyung-kyu. “Japan will likely be the next stop, but we’re still a bit cautious to confirm anything now.”