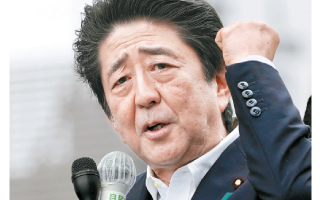 Abe appeared to be sidestepping the real reason for his government’s restrictions on industrial exports to Korea - court rulings against Japanese companies found guilty of forcing Koreans to work for them during World War II - and suggesting an overarching problem with trust in Seoul that extends to security concerns.

One suggestion is that high-tech products made with Japanese materials may be making their way to North Korea.

Speaking on a televised debate ahead of upper house elections on Fuji TV, Abe said that South Korea “claims that it is abiding by sanctions on North Korea” and is also following the Wassenaar Arrangement, the first multilateral export control regime for conventional weapons and sensitive dual-use goods and technologies.

Abe went on to suggest that Seoul is not capable of fulfilling its commitment to implement sanctions on the North because it “clearly does not keep its promises and abide by the claims agreement between two countries” and “obviously will not properly abide by trade regulations.”

On the matter of his government’s new restrictions on exports of key industrial materials to Korea, Abe said that there was an “occurrence of an inappropriate matter,” and added, “you can’t trust what they say.”

Japan on Thursday implemented export restrictions to Korea on three key materials - fluorinated polyimide, hydrogen fluoride and photoresists - needed in the production of semiconductors and smartphones. The move was a response to the Korean Supreme Court decisions last year calling for Japanese companies to compensate the victims of forced labor during World War II - a move Tokyo has protested as going against a 1965 bilateral claims agreement which it says settled all compensation matters.

Korean Trade Minister Yoo Myung-hee said Thursday that Japan’s export restrictions violated global agreements including the Wassenaar Arrangement of 1996, which both South Korea and Japan are a party to. This arrangement stipulates that it “will not be directed against any state or group of states and will not impede bona fide civil transactions.”

Tokyo has not officially acknowledged the wartime forced labor verdicts as the reason behind its economic retaliation against Seoul. It has merely mentioned a lack of “trust” and an “occurrence of an inappropriate matter” as reasons for its export curbs on Korea.

Abe’s remarks on Sunday broadened the idea of an “inappropriate matter” to violations of the implementation of sanctions of North Korea.

Analysts said Japan may be trying to undermine the international community’s trust in South Korea through linking its export restrictions with violations of North Korea sanctions and security issues related to Pyongyang.

Koichi Hagiuda, the executive acting secretary-general of Abe’s Liberal Democratic Party (LDP), said on Fuji TV last Friday that security reasons were behind Japan’s strengthening of export restrictions on South Korea, citing “concerns” that high-tech materials could end up in North Korea and be used for military purposes. Another LDP senior official also suggested, according to media reports, that high-tech materials’ whereabouts was unclear and that etching gas, or hydrogen fluoride, used to make microchips, could have “ended up in North Korea” and be used to produce chemical weapons.

Such allegations have been rejected by Seoul’s Trade Ministry.

Abe’s ruling coalition is facing an upper house election on July 21, which is seen as a factor behind the rhetoric against Seoul.

Abe’s LDP and its coalition partner, Komeito, winning a solid majority in the House of Councillors could help ensure the prime minister’s longtime ambition of revising Japan’s pacifist constitution and enabling it to become a country that can wage war.

A Blue House official said Monday about Japan’s remarks on North Korean sanctions violations: “When Japanese high-ranking officials raise such allegations, I believe it has to be preceded by proving what they mean by such remarks. Korea is clearly and faithfully implementing UN [United Nations] Security Council sanctions on North Korea in cooperation with the international community.”

Tokyo protested the Korean Supreme Court rulings last October and November and the subsequent legal procedures being taken by forced labor victims to seize the assets of Japanese companies in Korea. Seoul has stood by the independence of the judicial branch and last month proposed a joint fund made up of voluntary contributions by Korean and Japanese companies - which was immediately rejected by Tokyo.

Japan said last week it is reviewing removing Korea from a so-called “white list” of countries with minimum export regulations. Korea demanded the measures be withdrawn and said it will file a complaint with the World Trade Organization (WTO) over Japan’s export restrictions.

Just one week after Japan announced it would restrict the exports to Korea, Japanese broadcaster NHK reported Monday if “there is no change” in Korea’s response, further restrictions may be implemented.

NHK went on to report, citing Japanese officials, that preferential export treatment for Korea will be halted if “no improvement is seen on the South Korean side.” It added that restrictions may be expanded to exports of machine tools and carbon fiber products.

It cited Japanese officials as saying that the measures are necessary to protect national security, adding that the restricted materials “could be used for military purposes,” and that South Korea “has already used some of them improperly.”

This also provides an excuse for Japan to circumvent WTO regulations, which allows exceptions in the case of possible military use.

Japan reportedly expressed hope that the export curbs “will prompt South Korea to place the materials under proper control.”

Despite such diplomatic difficulties with Tokyo, the position of economic counselor at the Korean Embassy in Japan, who would have overseen such export regulations and trade relations, has been vacant for the past four months.

A diplomatic source told the JoongAng Ilbo Sunday that under the current Japanese government’s retaliatory measures, “the absence of an economic counselor on location who would have gathered information on the current situation and come up with response measures is a big blow.”

While the Korean Ministry of Foreign Affairs said Japanese officials did not give prior notice ahead of its announcement of the export restrictions on July 1, Japanese media have been warning about such measures since Jan. 19.

An immediate resolution is unlikely, but experts point out that there may be more room following the Japanese elections.

“Until the [Japanese] upper house elections, it will be hard for anyone to put on the brakes,” said Park Cheol-hee, a Japanese politics professor at the Seoul National University’s Graduate School of International Studies.