SEOGWIPO, Jeju - Jeju used to be called “samdado,” which literally means “an island of three abundances” - referring to the abundance of stones, wind and women on the island. Now people in the art world jokingly say it should be called “sadado” or “an island of four abundances” to include the many art museums that have sprung up on the island. According to the Ministry of Culture, Sports and Tourism, the island had 19 modern or contemporary art museums as of 2018, in addition to 62 museums for artifacts. Most of the art museums were set up within the past ten years, transforming Jeju into an “island of art.”

Accordingly, the southern resort island is no longer just a place to enjoy pretty beaches, Mount Halla or outdoor activities such as golf and horseback riding. You can spend at least three nights and four days touring the art museums scattered throughout the island, which is three times larger than Seoul. With so many options, it can be hard to choose. Here are some highlights chosen by the Korea JoongAng Daily to check out during your next visit. 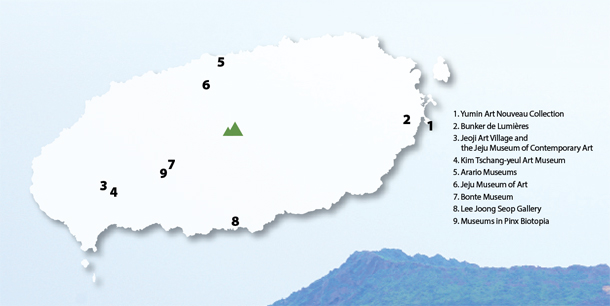 The museum, located on the Seopjikoji cape of eastern Jeju, features glassware made by French masters in the peak of the Art Nouveau period at the turn of the 20th Century, allowing visitors to experience the ways that architects, as well as the glass craftsmen, interact with nature.

Its buildings and gardens, designed by the renowned Japanese architect Ando Tadao and renovated by Danish architecture team JAC Studios, actively embrace the volcanic island’s nature as part of their design. Using so-called “borrowed scenery,” a garden wall made of basalt unique to the volcanic island has an opening carefully designed so that the Seongsan Ilchulbong tuff cone, one of the island’s landmarks, can be seen clearly across the sea.

In the darkened rooms of the museum, visitors can see flowers, fruits, animals and mythological figures made of translucent glass gleaming in rich colors on the surfaces of jars, vases and lamps in various forms. They were created by masters like Emile Galle and the Daum Brothers, inspired by the flora and fauna of Northeastern France. The museum, based on the collection of the late Hong Jin-ki, former chairman of the JoongAng Ilbo, opened in 2017. 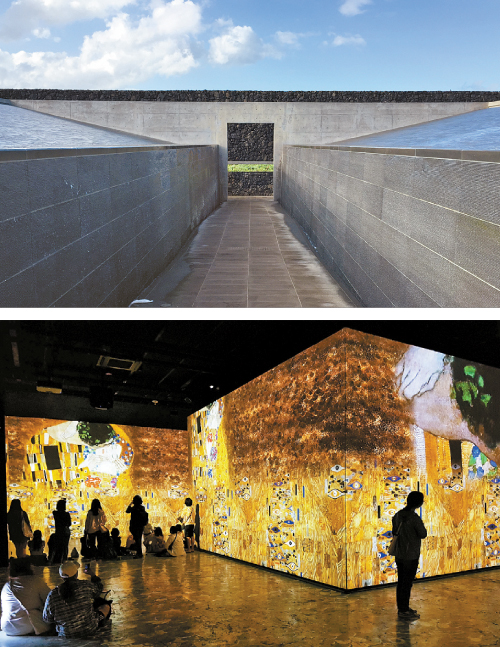 What once was a secret bunker to hold submarine cables near Seongsan Ilchulbong in eastern Jeju Island has been transformed into "Bunker de Lumieres," a vast art space that shows spectacular media art pieces all over its walls and floors through more than 100 projectors.

The space is the third “Amiex (Art and Music Immersive Experience)” project created by the French company Culturespaces and is the first to be held outside of France. The Korean Bunker opened last November and runs through Oct. 27. It showcases a 30-minute media art piece based on Austrian symbolist artist Gustav Klimt's famous golden paintings, including "The Kiss," and a 10-minute piece based on works of Austrian artist and architect Friedensreich Hundertwasser. 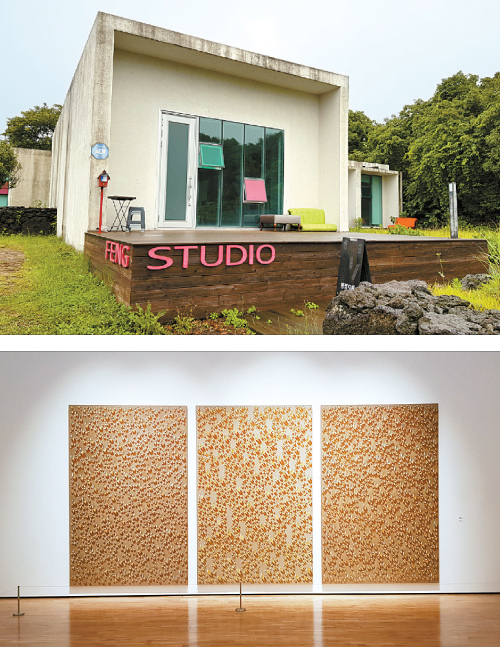 The village in western Jeju, which first started to take shape in 2000, now holds the houses, studios and galleries of 35 artists, writers and art collectors.

Among the residents is Park Seo-bo, the 88-year-old master of dansaekhwa, or Korean monochrome paintings, whose large-scale retrospective is now running at the National Museum of Modern and Contemporary Art Seoul. There is also a studio belonging to the 51-year-old Chinese artist Feng Zhengjie, famous for his portrait paintings which depict a model’s face in a bold contrast of red and green, with vacant diverging eyes.

Some hanok, or traditional Korean houses, and modern minimalist structures are among the diverse styles of homes and studios built in the village, providing a picturesque scene for visitors.

At the center of the village stands the Jeju Museum of Contemporary Art. Notably, painters Kim Heungsou and Park Kwang-jin donated art to the museum in 2006.

The municipal museum located in the Jeoji Art Village celebrates Kim Tschang-yeul, a renowned 89-year-old Korean artist nicknamed the “water drop painter.” The museum, designed by architect Hong Jae-seung and built in 2016, houses and exhibits 220 works donated by the artist.

Kim was born in Maengsan, now in North Korea. But, he lived on Jeju during the 1950-53 Korean War. He settled in France in 1970, where he married a French woman and spent more than 40 years. “I love Jeju- its water and its sunlight,” Kim once said, pointing out their similarities to southern France.

Since Kim showed his first water drop paintings at the “Salon de Mai” show in Paris in 1972, for which he received favorable reviews, he has continued to paint water drops for more than four decades. The permanent exhibits in the museum show the evolution of the water drop paintings, which create illusions of real water droplets forming as brightly-shining beads on the canvases in the trompe-l’œil tradition and are open to various interpretations.

The museum also holds special shows of other artists. Admission is 2,000 won for adults. Visit kimtschang-yeul.jeju.go.kr or call (064) 710-4150 for more information. 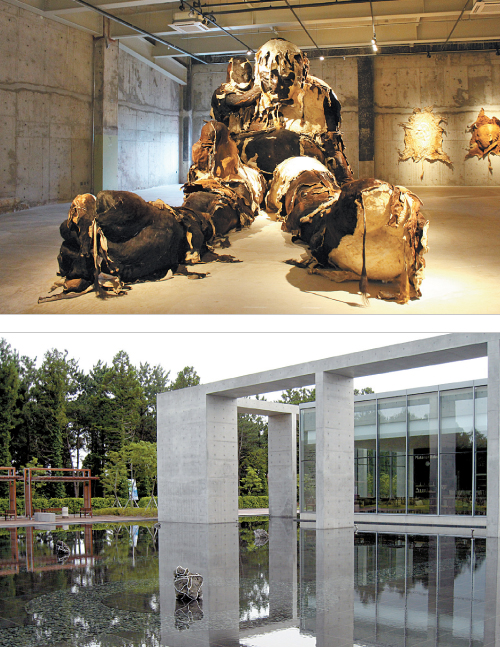 In the Old Town of Jeju City on the island's northern coast are three Arario Museums located in bright red buildings, which opened one by one in 2014 and 2015. Visitors to the museums will be surprised to see works by some of the world's hottest contemporary artists on such old and humble streets.

The exhibits are part of a collection by Ci Kim, chairman of Arario Group and one of the most influential art collectors in Korea. Arario Group operates both retail and art gallery businesses.

The three Arario Museum buildings are located in remodeled structures that were once a multiplex cinema and cheap hotels. The museums’ official names - Arario Museum Tapdong Cinema, Arario Museum Dongmun Motel I and II - reflect their past.

There is another attraction for contemporary art lovers in the northern part of Jeju Island. The Jeju Museum of Art, located in Yeon-dong, opened in 2009.

Now, celebrating its 10th anniversary, the museum is presenting a large-scale group exhibition titled "Jeju Art Highlights: 99+1" through Sept. 15. It features 99 artists born or based in Jeju Island. They range from Byun Shi-ji (1926-2013) and the 67-year-old Kang Yo-bae, among the most famous artists from the island, to lesser-known young artists.

The museum is a refined building made of exposed concrete. The pools of water surrounding the building support floating sculptures, and at twilight, the shadow of the museum is beautifully reflected against the calm surface of the water. 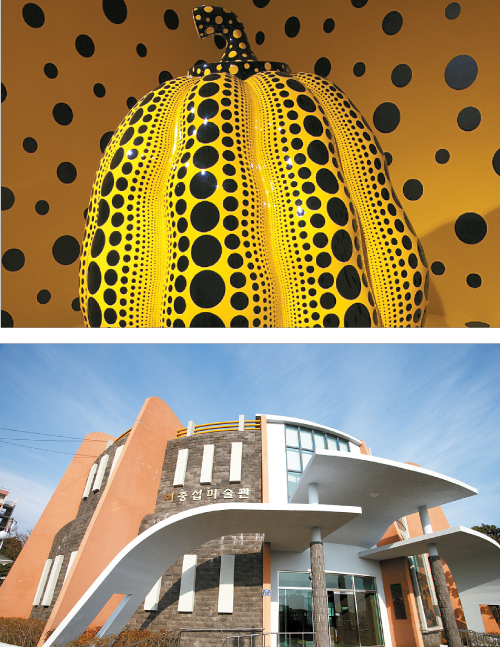 With the name Bonte, which means “original form” or “the way it is” in Korean, this museum opened in 2012 to collect and exhibit both Korean traditional art and contemporary art from around the world. The museum, located in southwest Jeju, consists of the several buildings that house five galleries and other facilities, with gardens that link the buildings together smoothly, designed by Japanese architect Ando Tadao.

Gallery 1 features Korean traditional crafts including various soban, or wooden tray-tables, and bojagi, or wrapping cloth. Gallery 2 houses works by contemporary artists. Gallery 3 is dedicated to renowned Japanese artist Yayoi Kusama’s works, and Gallery 4 focuses on the aesthetics of Korean traditional funeral tools including sangyeo, or funeral bier, and kkokdu, or the colorful figurines that decorate sangyeo. Gallery 5 is reserved for special exhibitions.

Seogwipo, on the southern coast of Jeju, is home to the municipal museum built to celebrate the life of Lee Joong Seop (1916-1956), one of the most important painters in Korea’s modern art history. Lee spent 11 months in the city as a refugee during the Korean War. Although his stay was short, he created many important pieces here, according to the city.

The museum was built in 2002 at the site of a house where Lee stayed. Gana Art Center and Gallery Hyundai, two of Korea’s oldest and biggest commercial galleries donated Lee’s paintings and drawings to the museum, amounting to about 120 pieces in total. 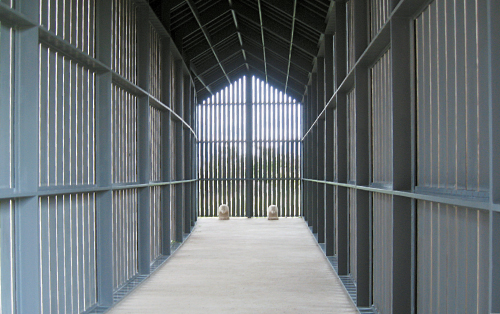 Just a five-minute drive by car from Bonte Museum is the resort-like residential complex called Pinx Biotopia, which shares part of its name with the nearby Pinx Golf Club in Andeok, located in southwest Jeju.

The houses and townhouses within the complex were designed by Jun Itami (1937-2011), a renowned Korean architect based in Japan. Itami created four museums at the complex - the Water, Wind, Stone (or Rock) and Two Hands Underground Museums.

With a name like the Water Museum, you may expect to see galleries filled with artworks about water. Yet, this unconventional museum features real water as the art on display. Made of exposed concrete, the museum has a large square pool filled with water inside its walls. Overhead, a large oval has been cut out of the ceiling, revealing the sky. Here, it is the movement of the sun and clouds that determines the nature of the water in the pool. Sometimes the water’s surface is rippled by the wind, sometimes it shines and at other times it remains shaded. In observing these subtle but constant changes, visitors become more attuned to water’s natural sounds and rhythms.

The Wind Museum looks just like a long wood cabin when viewed from the outside. But upon entering the building and passing through the corridor, visitors hear the sound of the wind blowing through the gaps in the wooden planks. The interior has stones to sit on and a few well-placed stone sculptures. Outside, the building is surrounded by tall grass and other greenery, which enhances the visual and aural experience of the wind.

Unfortunately, the Pinx Biotopia is open only to residents and their companions. For outsiders, guided tours are provided twice a day, but must be booked in advance.

Podo Hotel is a single-story boutique inn within the neighboring Pinx Golf Club, that was also designed by Itami. The inn’s design is based on the shapes of the mountains and traditional houses on Jeju Island. Its roof looks like a bunch of grapes when viewed from above, which gave the museum its name. “Podo” means “grape” in Korean.

About 10 minutes away by car from Pinx Biotopia is "Church of Sky" also designed by Itami. Inspired by Noah's Ark, the church is surrounded by a tranquil pool that makes the building look as if it were floating on the water.