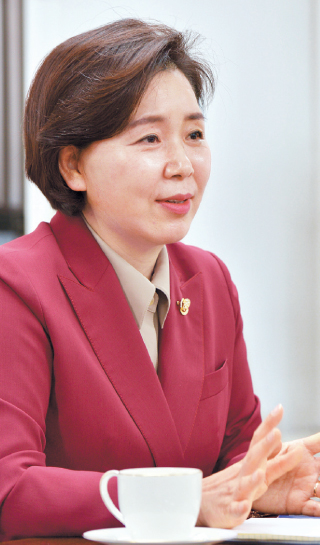 Japan is restricting exports to slow the development of the Korean semiconductor industry, according to Yang Hyang-ja, president of the National Human Resources Development Institute.

On July 4, Japan restricted exports to Korea of three key materials used in the manufacture of semiconductors and displays.

The former Samsung Electronics executive, who has expertise in semiconductors, believes the move is part of Japan’s efforts to claim leadership in the relevant technologies. She made the comments during an interview with the JoongAng Ilbo on Monday at the institute’s office in Jincheon, North Chungcheong.

“Korea has been No. 1 in the memory semiconductor field for the past 27 years, and the gap with Japan has been growing,” she said. “There has been no other field in which Korea has outpaced so many countries, including the United States and Japan.”

Even though many countries have declared plans to lead in the fourth industrial revolution, realizing the plans without Korean chips will not be easy, she added.

She speaks Japanese fluently, and has used her skills extensively during her career. When Lee Byung-chull, the late founder of Samsung Group, invited Shigetaka Hamada, a top Japanese semiconductor expert, to the 1988 Seoul Olympics, Yang was the interpreter. Hamada is mentioned several times in Lee’s biography as his close friend, and Yang has maintained contact with Hamada ever since.

Japan is afraid of Korea taking the lead in the chip sector, especially in terms of non-memory products, she believes, adding that the recent restrictions will threaten the future rather than the present.

With the development and growth of 4G communications, demand for memory chips jumped. In the 5G era, it is inevitable that non-memory chip demand will grow due to the rapid spread of virtual reality (VR) and augmented reality (AR) devices.

It is meaningful that President Moon Jae-in and Samsung Electronics said 133 trillion won ($112.68 billion) would be invested to propel Korea to the No. 1 position in the non-memory sector, she said.

In memory products, the challenge is ramping up production to manufacture a small number of chip types. In the non-memory business, orders are received for small batches of distinct products.

“Making a product with specifications that customers demand by a designated time is crucial for the non-memory business,” she said.

If it takes as long as 90 days to bring key materials from Japan, it will be impossible for Korea continue with its foundry business.

She also offered forecasts on the global chip market. In the non-memory sector, Samsung Electronics has a 19-percent market share. The No. 1 player is TSMC of Taiwan, which has 49 percent of the global market.

Only the two companies in the world are competing in the 7-nanometer category using extreme ultra-violet lithography, which is essential for victory in the non-memory sector, she said.

The process requires a machine made in the Netherlands that costs 150 billion won per unit. Out of the 30 machines produced this year, TSMC has already booked 18 units. Korea is about to lose the supply of key materials in facing this challenge, she added.

Even in producing the materials that Japan is restricting, chips must have been involved, Yang said.

“Semiconductors are a necessity for churning out various military supplies,” she said. “Korea’s leadership in chip technologies means the entire world has fallen victim to the recent measures by Japan.”

When asked about the solutions to the current situation, Yang brought up the principle of separating politics and economy, and the importance of cooperation.

“Forced labor is a past that the victims did not forgive,” she said. “But [Japan] made a stupid choice by creating an economic problem out of a lingering issue involving victims still alive.”

“The semiconductor business requires a high level of conscientiousness, given that any individual involved in the more than 500 processes making a mistake will lead to defective products,” she said. Japan “is not supposed to disrupt Korea’s supply channel with unconscionable measures when Korea is in charge of supplying to the customers around the world.”

When she called Hamada last weekend, the Japanese expert said many people in the Japanese economic community believe Prime Minister Shinzo Abe was “going too far” and the measures could not have been made if Abe understood the nature of the semiconductor ecosystem.

As time goes by, the world will protest Japan’s move due to glitches in the high-quality chip supplies, Hamada said according to Yang.

If the tensions between Korea and Japan last longer than expected, the situation will work favorably for China in the memory sector and Taiwan in the non-memory, she warned.

The former chip executive noted at the end of the interview that the ongoing turmoil in the chip sector could offer a chance for Korea to realize that large companies are not “evils” but crucial entities with technological authority in the global community.

“Koreans should work together to tackle the crisis rather than blaming and criticizing the government,” she said. “At the same time, we should foster outstanding talent to contribute to the country.”