Opening up the world of unboxing videos: Koreans are flocking to YouTube to get up close to new products

Opening up the world of unboxing videos: Koreans are flocking to YouTube to get up close to new products 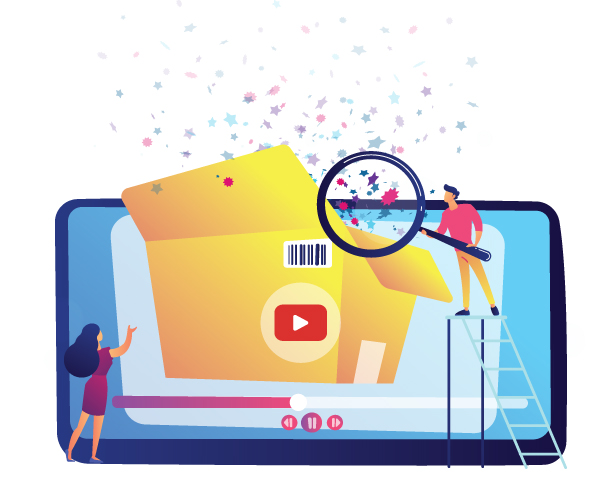 Twenty-four-year-old college student Kim Shin-hye spends about two hours a day watching videos on YouTube. Of the 10 or so clips she watches every day, three or four are usually “unboxing” or “haul” videos, an increasingly popular subgenre online in which people show themselves opening various products from their packages.

“I love the exciting feeling I get as I watch YouTubers unwrap my favorite things,” said Kim.

Recently, Kim watched a video uploaded by Park Mak-rye, the 70-something YouTube star. In the clip uploaded in February, Park shows off what she picked up during a trip to the local grocery store, including pears, peppers, radishes, tangerines and fish.

Unpacking a box delivered to your door or taking the groceries out of a shopping bag may seem like a mundane task, but it has proven to be a popular genre on YouTube, along with what is known as a haul video. In these clips, people show off their purchases made during a shopping spree.

Haul literally means to pull or drag but it means going on a shopping spree on YouTube.

Anyone can be the star of haul and unboxing videos. Teenagers usually show off stationery goods and unbox them, while beauty YouTubers do the same with cosmetics.

The latest trend on YouTube is unboxing products or showing off shopping hauls. YouTubers including Park Mak-rye, far left, reveal their purchases on camera for viewers to enjoy. [SCREEN CAPTURE]

Unboxing began in 2007 as some YouTubers began uploading detailed reviews of IT goods. The genre became a worldwide phenomenon in 2010 when American YouTuber Jeffree Star uploaded a haul video featuring various luxury goods.

For this reason, many haul and unboxing videos feature mostly IT gadgets and luxury brands.

According to YouTuber Sunny Kim, who runs the channel PnB TV, more than 70 percent of the traffic comes from searches for the keyword “luxury haul.”

Kim said she spends a whole week producing and editing a 20-minute haul and unboxing video.

An acquaintance of Kim, who knows that Kim frequently purchases luxury goods, was the first to recommend that she upload clips of her purchases in the first place.

“A lot of young people watch haul and unboxing videos these days. You’d better make your own,” the friend suggested.

What makes people, especially those in their 20s, remain loyal viewers of such videos?

Previously, people used to turn to TV stars back in 1970s and 80s and K-pop boy bands in early 2000s, but YouTube stars have replaced on-screen stars of the past, according to professor Kim.

The feeling of satisfaction increases when the star is more popular or wealthier, which is one reason why there are more luxury haul videos than grocery hauls.

Kim Rang, 25, a rank-and-file company worker who regularly watches haul and unboxing videos, said, “It is so satisfying that I can have an up-close-and-personal look of luxury goods produced by artisans with just a few clicks.”

Haul and unboxing videos also offer detailed information to viewers, which can be equally satisfying for some.

YouTubers zoom in on the stitching, buttons and the texture of the fabric of the goods they have just opened. Some YouTube stars provide a brief history of each luxury brand and add fashion tips on how to mix and match the product with other items. Some even dress up later in the clip.

Everything from the product’s brand name to its price are revealed during the video.

The volume of information given to the viewers becomes more diverse and in-depth in IT haul and unboxing videos.

YouTuber ITSub recently uploaded a clip of him unpacking a tablet device two months ago, in which he pointed out that the company wrapped its product with felt-like fabric unlike its rival company, which uses plastic wrap.

Pixels, processors, memory capacities and newly added special features of the tablet are addressed in detail and compared to similar products.

Noh Hye-in, a 25-year-old college student, said, “I seek out unboxing video clips when I plan to buy products such as sneakers or electronic devices. They are helpful in a way that the videos look into every nook and cranny of the product that I want to get.”

Due to the immense popularity of these videos, some companies give their products to YouTubers for promotional purposes.

Information matters for some viewers but experts see haul and unboxing videos from a different point of view.

“By obtaining expertise through these video clips, some feel like they are a part of a certain, special group,” said Kwak Geum-ju, a professor of psychology at Seoul National University.

Not everyone enjoys haul and unboxing videos, though.

A 26-year-old job seeker who wanted to be identified only by his surname Kim said, “I’ve watched haul videos a couple of times out of curiosity but I consider them a league of their own. They are not appealing at all.”

But the popularity of haul and unboxing videos shows no sign of slowing down for a while.

Lee Dong-gwi, a professor of psychology at Yonsei University, says there is a link between the popularity of haul and unboxing videos and a surging number of single households in the nation.

“Young people who live on their own find solace from YouTube. By watching YouTubers sharing their shopping lists, they feel assured that they are not different from others.”

According to a report published by the KB Financial Group’s business research institute earlier this year, the number of single households in 2017 was about 5.62 million and accounted for 10.9 percent of the nation’s households. The number is expected to jump to 16.3 percent by 2045.