A union above the law

A union above the law 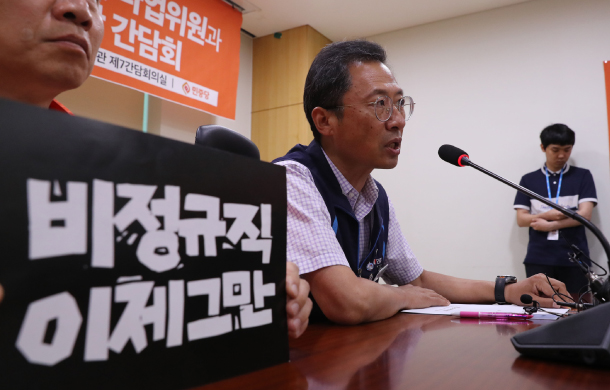 Kim Myeong-hwan, chairman of the militant Korean Confederation of Trade Unions (KCTU), makes a speech at a meeting with members of a leftist party on July 2, a day before a general strike across the nation. [YONHAP]

Ha Kyung-hyo
The author is a former chairman of the Korea Society of Labor Law and professor of emeritus at Korea University School of Law.

Kim Myeong-hwan, chairman of the Korean Confederation of Trade Unions (KCTU), was arrested on June 21 for assaulting officers and breaking a wall around the National Assembly during a rally in protest of the extension of statutory flextime. He was released six days later after the court accepted an appeal to his detention. The militant KCTU has since declared war with the Moon Jae-in administration and vowed to launch a nationwide anti-government general strike and rallies.

The fallout between the liberal administration and the combative umbrella union is sad for several reasons. It is not just because of the longstanding bond between the union group famous for its involvement in the ouster of President Park Guen-hye in 2017 and the ruling Democratic Party (DP), whose backbone is workers and pro-union forces. Since the KCTU was founded, five of its leaders have been released.
The sitting leader was charged for orchestrating violent protests. The KCTU regarded the charge as government oppression against labor forces.

To gain sympathy for the KCTU’s accusation, the law enforcement crackdowns on its violent activities are identified as unjust and overbearing. But few would agree. The prosecution and the court would have responded same way if other groups — say, the association of small merchants and shopkeepers — had committed violence and illegal acts during their protests. Even as the right to assemble and protest is stipulated by the Constitution and other laws, physical violence and destruction of facilities and properties cannot be tolerated no matter what.

Even if laws were broken for the sake of upholding union rights or as a protest against inappropriate actions from the government and employers, such conditions can hardly pardon them though they can be taken into account when judging the accountability of the actions. And yet the KCTU vows to take revenge against the prosecution and court moves if its leader is declared guilty and punished. It is more or less threatening the government and judiciary for undermining its authority.

How has the KCTU come to believe it is above the law? The KCTU may be self-deluded to think that any collective action under the name of labor rights can justify acts of violence. It has entirely misunderstood their labor rights defined by the Constitution if it thinks its extralegal activities can be pardoned.

The KCTU may have its own reasons to justify the use of violence and accuse legitimate law enforcement activities as being labor oppression. It believes the state has been irresponsible in its role to protect labor relations.

The government has the duty to play the fair and reasonable mediator between employees and employers. It must not side with either one of them when drawing up labor-related policies and laws — barring a very few cases involving inequality or unfairness for both sides.

The government has not done its best to persuade the union when pursuing revisions to the labor terms in order to allow greater flextime to minimize damage from the enforcement of the 52-hour workweek across the board. Governments around the world have sought flexible provisions when shortening work hours — through close discussions with the labor and management.

The government, however, implemented the universal 52-hour workweek and scurried to amend the flextime after apparent productivity harm from the universal cutback on different business fields. Its thoughtlessness has irked the union and troubled business as well. Still, the government follies cannot excuse the umbrella union’s unfettered violence. The unions must not waste time on protests. It must show leadership to present a new labor movement and work standards in the rapidly changing work environment amidst Korea’s rapidly waning productivity, protracted economic slowdown, alarming youth unemployment and increasing automation.