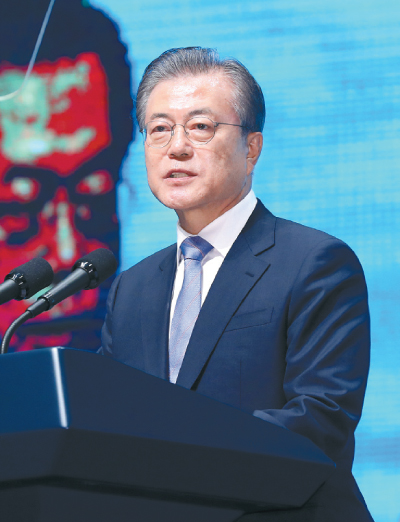 President Moon Jae-in lavished praise on Admiral Yi Sun-shin Friday, the prominent naval commander best-known for victories against Japan in the Imjin War (1592-1598), an apparent jab at Tokyo amid an escalating diplomatic row.

On a visit to the southwestern province of South Jeolla, Moon said Yi’s “patriotic spirit” lives on in that part of Korea, in a speech at the South Jeolla provincial government office in Muan County.

“It was residents of South Jeolla who, along with Admiral Yi, protected the country with only 12 ships,” Moon said to a crowd that included government officials, Blue House officials, and mayors and lawmakers of the province.

Admiral Yi’s most famous victory was against Japanese forces in the Battle of Myeongnyang (1597) off Korea’s southwestern waters, when he destroyed 31 out of 133 Japanese ships with only a dozen vessels. That victory effectively blocked Japan from further advancing north.

Yi died one year later in a different battle against Japan.

Moon was visiting South Jeolla on the 10th stop of his so-called national economic tour, in which he is visiting regions outside the Seoul metropolitan area to encourage the revitalization of local economies. Friday’s visit to South Jeolla was his seventh stop on the tour this year.

Moon also took time to praise South Jeolla activists who fought for democracy from the ’60s through the “candlelight revolution” that took down the government of his predecessor, President Park Geun-hye, in 2017, saying the region proved to Koreans all over the country that it was “ordinary people” who triumph in “a turbulent age.”

After the speech, Moon was briefed by South Jeolla government officials about the province’s Blue Economy vision, which revolves around sustainable development.

Following the briefing, Moon visited the so-called Naju Bitgaram Innovation City - an industrial hub that’s home to some 32,000 people and 16 public companies in Naju, including the Korea Electric Power Cooperation and the Korea Rural Community Corporation - to hear about the area’s plans to become a global energy industry hub.

In the evening, he had dinner with South Jeolla business leaders.

Moon made a final stop in Gwangju to declare the start of the Gwangju 2019 FINA World Championships during the opening ceremony at the Universiade Gymnasium of Kwangju Women’s University.