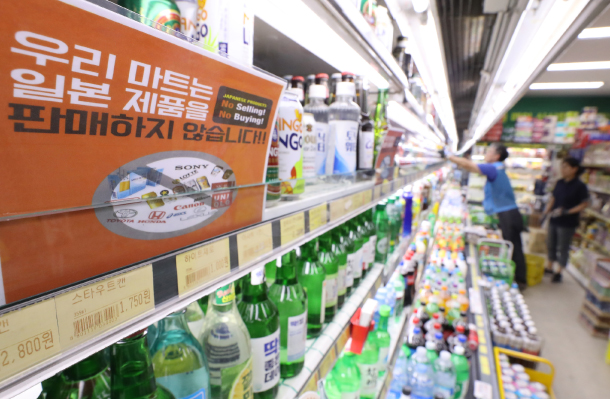 A sign reading “No selling! No buying!” of Japanese goods is displayed on the shelves at a local midsize mart in Seoul on Tuesday as retail operators join a boycott against Japanese consumer goods. [YONHAP]

Korea’s boycott of Japanese stuff is growing, an angry reaction to Tokyo’s new restrictions on imports of vital industrial materials.

Some 3,000 small and midsize shops removed Japanese goods from their shelves as of last weekend, according to the Korea Federation Midsized and Small Merchant (KFSM) on Monday. The organization’s membership is roughly six million small and midsize business operators.

While boycotts usually refer to consumers refusing to buy certain products, it is a somewhat new phenomenon for shop operators to stop selling products to protest something.

“If a midsize mart sells some 30,000 different consumer goods, some 200 goods are Japanese,” explained Hong Chun-ho, a policy director for the KFSM in a phone call with the Korea JoongAng Daily Tuesday. “The 3,000 shops have already removed beer, tobacco and even sauces with Japanese labels from their shelves, and more business operators are joining the move.”

According to Hong, the Korea Supermarkets Alliance, which has more than 20,000 operators as members, has decided to get on the anti-Japan bandwagon.

“The situation is very different for convenience store operators because they are part of a larger chain and can’t simply return products they have back to the headquarters,” Hong said. “But they too have agreed not to make additional orders for Japanese products and are making sacrifices in their revenues.”

Sales of major Japanese products like beer are declining sharply at major supermarket chains and convenience stores in Korea.

According to Emart, sales of Japanese beer fell 24.6 percent in the first two weeks of July compared to the last two weeks of June, which was before the Shinzo Abe administration announced it would restrict exports of key materials used to manufacture semiconductors and displays starting July 4, in apparent retaliation for a diplomatic row over wartime forced labor.

Some Japanese restaurants and bars are voluntarily halting sales of Japanese beer and other drinks, and apologizing to customers for being in the izakaya (Japanese drinking joint) business.

After CFO Takeshi Okazaki of Fast Retailing, owner of Uniqlo, said damage from the boycott will be “short-term” during an earnings release in Tokyo last week, public outrage in Korea grew.

Uniqlo did not reveal changes in its sales. Yet according to research conducted by one local card company at the request of domestic newspaper Seoul Shinmun, the number of transactions at Uniqlo by debit and credit cards from July 3 through 10 fell by roughly 26.2 percent compared to the previous week.

Regional governments are supporting the boycott by canceling scheduled trips to Japan or setting up committees to dispose of remnants of Japanese colonialism.

The South Chungcheong Provincial Council will establish a committee to clear away monuments or statues that glorify Japan collaborators. The committee will look for ways to change names of streets or villages named during the Japanese colonial era.

While some 50 public servants and officials related to athletic organizations in Ulju County, Ulsan, were planning field trips to sports centers in Hokkaido, Japan, from July 11 through 14, the trip was canceled.

Hongcheon County in Gangwon and the Hongcheon Culture Foundation decided to not sell Japanese beer at the regional beer festival scheduled for July 24 through 28. The organizers were originally planning on selling Kirin beer. The foundation said it will not use any other Japanese goods until the controversial export restrictions are lifted by Tokyo.

Lotte Group could become a major victim of the boycott. Lotte Shopping has a 49-percent stake in FRL Korea, which operates Uniqlo in Korea. Lotte Chilsung Beverage has a 50-percent stake in LotteAsahi, a joint venture with Japan’s Asahi Group Holdings that imports Asahi beer. Falling sales for Uniqlo and Asahi would be a major blow to the performance of the Lotte affiliates.

Lotte Chairman Shin Dong-bin started a five-day meeting with heads of Lotte affiliates from Tuesday on how to deal with the boycott.

“Despite the sentiment against Japan, people should be careful not to criticize people as traitors just because they saw them using Japanese products,” said Lee Eun-hee, a professor of consumer science at Inha University. “Every person still has the right to make their own choices on what to buy.”