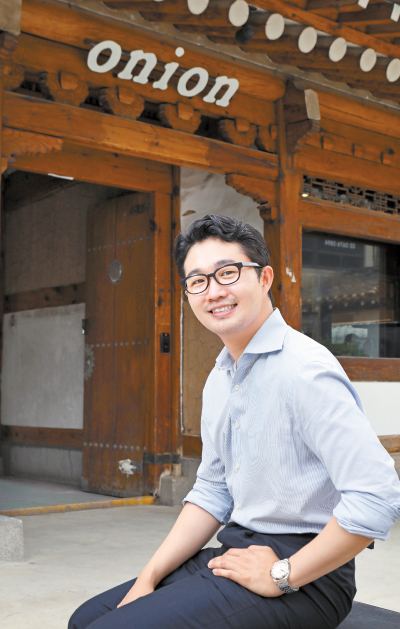 There’s a coffee shop in Seoul that many people visit in vain. During peak hours - usually around lunch and after dinner on the weekdays, as well as the whole weekend - it’s not uncommon to see a long line formed outside the hanok building (a traditional Korean home) in Anguk, central Seoul, that has been home to cafe Onion since early this year. Those who frequent coffee shops just to get their daily caffeine fix and leave may have a hard time understanding what the excitement is all about.

But Onion, which operates three locations in Seoul - Onion Seongsu in eastern Seoul, Onion Mia in northern Seoul and Onion Anguk in central Seoul - is focused on the arts of quality coffee and baked goods that seem to attract their valuable customers.

It is easy to understand the excitement around Onion by comparing it to Blue Bottle, another high-end coffee retailer from the U.S. that has opened two branches in Seoul this year, to the excitement of many. Customers worldwide flock to Blue Bottle for its famous coffee and Korean cafe aficionados are happy to wait in long lines to experience the brand in Korea.

Although Onion is relatively younger than the Blue Bottle, as its Seongsu branch opened in 2017, it is rapidly growing as the most competitive Korean high-end coffee retailer, quickly transforming the formerly nondescript neighborhoods it enters into some of the hippest streets in Seoul.

And while the lines that snake out the door at local Blue Bottle cafes are made up of mostly Koreans, it’s mostly foreign travelers to Korea who line up at Onion.

Yu Zu-hyung, who started Onion in Seongsu-dong in Seongdong District three years ago says it’s the “coolest thing” about Onion.

“I think this is such a cool thing,” Yu added. “It’s too bad that I am saying this as a CEO, but even if I was not [CEO], I’d be amazed at a coffee company that’s able to make more than 50 percent of its profit from overseas visitors, let alone become one of the must-visit places when they are in Seoul.”

Korea is not an easy market to sell coffee. Because it’s such a coffee-crazed country, the competition is fierce. How was Onion able to differentiate itself and become one of the few coffee companies that can compete with big brands like the Blue Bottle in Korea?

To learn more, the Korea JoongAng Daily recently sat down with Yu, the man behind Onion, for an exclusive interview at Onion Mia in Gangbuk District, northern Seoul. The following are edited excerpts from the interview.

Q. Why do you think foreign visitors, especially those from China and Japan, are so attracted to Onion?

A. Honestly, Onion hasn’t been that aggressive in marketing or promotion. Yet, we noticed that our customers spread the word for us and that actually sparks growth in the business. They visit Onion and enjoy everything from the vibe of the cafe, the music, the smell, the baristas and the coffee they serve and the bread… They can’t help but take photographs and share them. It’s quite embarrassing to say so myself, but the customers know when the brand looks cool.

You seem to have a lot of pride in Onion. As I know, you were on a roll running the e-commerce business PPB Studios, which has launched many successful brands including the online fashion retailer, Chuu. Why did you suddenly leave all that behind and start a coffee business?

When PPB Studios grew in size and we had about 150 employees, I thought it was about time to start something new - a brand that could be acknowledged and praised for its quality and devotion of the people who create it. So I studied what kind of business would be the hippest for me to dive into in order to show how devoted I am to creating such a brand.

About four years ago, so many people were opening up coffee shops but I couldn’t really see a hip brand that can really connect with the sensitivities of millennials. Plus, most of our 150 employees were drinking many cups of coffee every day and they were buying them from somewhere else. So I thought, why don’t I establish the hippest cafe in Korea. The reason why I left the PPB Studios after opening the Seongsu branch is because I saw so much potential in Onion. I’m very much interested in the world market.

Among local online fashion retailers, Chuu was one of the first ones to enter the Chinese market. I made that decision quite early on because I thought if I missed the timing, we’d lose all of Korea’s Dongdaemun fabric market software to other Asian competitors. I see Korea’s cafe market similarly. China still appreciates Korean culture, and Korea’s cafe culture is one of the best in the world. Our coffee culture will of course be behind Europe, but Korea is one of the countries that puts a lot into the cafe culture. Koreans are crazy about cafes, and therefore, the standard for cafes here is very high.

The same thing applies for BTS. I admire the group and I knew Korea could one day create a globally influential K-pop group because Korea is crazy about pop music and we put so much into it. So I believe it’s time to show the ‘Kimchi power’ (chuckles) with cafes as well. If Koreans have one of the best cafes, and foreign travelers come, wait in lines and [enjoy it], we can also show that to the world.

If Blue Bottle can do it, Onion can do it too.

Are you saying that you want to expand overseas?

Of course. I am aiming to enter China first... I want more and more Korean brands to succeed outside the country and I hope that Onion can be one of them. In fact, what really caused me to think about overseas expansion is when the Seongdong District Office signed an MOU in May with Blue Bottle, agreeing to “sustainably grow and develop the neighborhood together.” I mean, I understand that politicians need the spotlight and Blue Bottle can give it to them, but honestly, Onion came in years before Blue Bottle and helped revive the neighborhood along with other smaller cafes there.

It would’ve been better if the District Office would sign such a memorandum with a Korean brand, not even with Onion, but with a smaller cafe that has a lot of Korean customers.

This incident made me realize that I want to turn Onion into an influential brand that only Koreans can make with a Korean sensibility.

Why did you start in Seongsu-dong?

The inspiration derived from Brooklyn. I’m also interested in the real estate market. When I was looking for a place to establish a company building for PPB Studios, I wanted somewhere in Seoul that’s similar to Brooklyn.

The borough is home to so many fashion-based-IT companies and is just a bridge away [from Manhattan]. Seongsu-dong is similar in that sense as it was just a bridge over from Gangnam District in southern Seoul, and subway line No. 2 went through it. Moreover, this neighborhood used to house many factories so the rent was very cheap.

At the same time, millennials no longer saw factory areas as something negative, but as a hip district. So we decided to rent a deserted factory and use it as an office building. Naturally, Onion was established in the same building.

What’s the story behind moving on to Mia-dong and then to Gye-dong in Anguk?

People always congregated at Onion Seongsu, and I saw them waiting in line for a table or even just to make a purchase. I was so thankful to all of the customers and wanted to show that appreciation by giving something back - to the customers and to a neighborhood. I am quite interested in regenerating neighborhoods, so I was driving around and found Mia-dong in Gangbuk District.

It really looked like a shabby old neighborhood. Then I saw a large post office building that had half of its first floor available for rent. Since not many people use the post office anymore, the post office was planning to decrease its size by half.

We decided to come to this quieter part of the city so that our frequent customers could enjoy Onion without having to wait in line, and also to help regenerate this neighborhood, if it’s possible. Therefore, at Onion Mia, we organize many events together with the owners of other small shops in the neighborhood and try to attract younger people to the neighborhood. With Onion’s art project team Fabrikr, we are also currently creating a map for the neighborhood that highlights great restaurants, cafes, dry cleaners and more.

As for Anguk, I want to give all the credit to my project team Fabrikr because the biggest success of it is the space design. We found an old hanok for rent near Anguk Station and immediately fell in love with it. We renovated the hanok so that we could save every structure possible, yet still establish a hip traditional hanok that people can immediately fall in love with.

For each Onion, we put in a lot of thought into how people would feel when they enter into the cafe: what they would see, hear, touch, smell and feel. Yet we try to make it look like we didn’t really care. That’s what makes it look cool.

As a CEO, all I think about is what the customers would like better. To do so, I run my company like a soccer team.

Some CEOs say their company is like a family and they go on holidays together and so on. But as for me, I create an atmosphere where they can motivate each other and even consider each other like competitors despite being on the same team in order to not become the one sitting on the bench. But as you know, these soccer players on one team are so close-knit, they collaborate and they care for each other. I’m so honored to have such a great team.