At Museum DAH:, every surface is made for art: The colorful space is photo-friendly and interactive for visitors

At Museum DAH:, every surface is made for art: The colorful space is photo-friendly and interactive for visitors 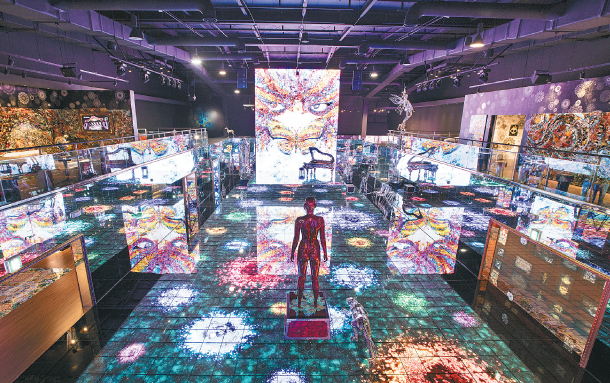 Museum DAH: is Korea’s largest museum dedicated to media art. Located in Centum City in Haeundae District, Busan, the museum is opening its doors for the first time Aug. 14 with the exhibition “Maximalia.” The museum was founded by media art duo col.l.age+ and art production company Kunst1. [MUSEUM DAH:]

BUSAN - What happens when two media artists decide to open a center to showcase the works they’ve created for the past decade? Korea’s largest digital art museum is born.

Museum DAH:, located in Busan’s busy Centum City commercial district, is an extravagant spectacle of lavish props and colorful images dancing across the floors, walls and ceilings of a two-story building. Instead of using projectors, the 2,314-square-meter (24,907-square-foot) museum employs expensive technology like LEDs and LCD displays, allowing the moving images to be presented in ultra-high 12.5K resolution.

The museum, which officially opens Aug. 14, is the ambitious project of digital art duo col.l.age+ (Sho Jang and Min Kim) and Kunst1, an art production company. According to Jang, the museum takes inspiration from the art nouveau movement of the late 1800s that sought to break down the barriers between fine art and applied art, defined as any object or structure that features decorations intended to be aesthetically-pleasing.

“Traditionally, it was common for people to feel that their lives didn’t have anything to do with art because of the modifier ‘fine,’” Jang, whose real name is Jang Seung-hyo, said during a press tour last Friday. He is also the new museum’s CEO.

“We are working towards a new art nouveau style, breaking stereotypes that art must only be hung on walls. Furniture, pottery - all objects used in everyday life can be considered art.”

To really nail in the message, Museum DAH: structured its debut exhibition “Maximalia” in a way that represents a house where every floor tile and piece of furniture is art, down to the electronic fan and toilet seat.

A decorative Porsche is parked outside the building, giving a taste of the luxury shrouded in the museum. A powder room equipped with tissues and curling irons - a gesture of goodwill for those looking to take photos while visiting - at the exhibit’s entrance reminds visitors that they aren’t walking into a typical gallery.

Left: Museum DAH: uses LED and LCD technology to create images directly on the walls and floors instead of projecting them. The ceilings are mirrored to create a sense of expanded space. Right: The new museum is divided into different rooms made to resemble an actual house. Pictured is the master bedroom. There are also bathrooms and a kitchen. [MUSEUM DAH:]

“Maximalia” starts with hallways majestically named “Knocking on Heaven’s Gate” and “Eternal Sunshine.” They’re lined with elaborately framed media art works set against heavily patterned walls. Many of the works, created by col.l.age+ over the years, are digitalized and moving images of famous paintings and characters like Elsa from the 2013 film “Frozen”, Mona Lisa, King Sejong and even Girls’ Generation’s Taeyeon.

Beyond the hallway is the heart of the museum, the “Miracle Garden,” which screens artful videos created by the art duo across multiple displays, as well as the floors and the walls.

At the center of the garden is a new creation by featured artist Kim Young-won, who is behind the statue of King Sejong in Gwanghwamun Plaza. For this collaboration piece with col.l.age+, the famed sculptor screens colorful moving images on to what appears to be a statue of a man sliced in half, incorporating digital art into his work for the first time in his 50-year career. Also on display are the late Italian designer Alessandro Mendini’s Proust Chair and col.l.age+’s collaborations with industrial designer Karim Rashid and fashion designer Lie Sang Bong.

Notably, each of the different rooms in the gallery - including the two bedrooms, kitchen and bathrooms - feature a unique scent. As one of the museum’s goals is to offer vistors a “multi-sensory experience,” in Jang’s words, the curators took care to include various elements that would heighten the senses. The “Miracle Garden” even offers an activity that incorporates augmented reality - if visitors use special goggles provided by the museum, they will be able to see virtual balls floating around.

Tired visitors can take a seat and rest in any of the blow-up chairs stationed throughout the galleries, or go up to the second floor for a bite to eat at the cafe. A seating area looks out into the “Miracle Garden” and has a DJ booth, making the space a potential nightlife venue. The garden itself hosts a large stage and had opera singers performing on its VIP opening night.

The Museum DAH: operators made no effort to hide the fact that they founded the museum with the intention of turning it into a franchise and exporting it to other major Korean cities and even abroad.

But why Busan and not Seoul? One of the biggest motivations, which Jang also admitted to, is that the coastal city is the artist’s hometown. But Busan is ripe to flower into something bigger than Korea’s second largest city, Jang believes.

“I believe that Busan has an infinite potential to develop as a tourist city. My role model is Antoni Gaudi, whose art not only shows in his architecture but permeates through the entire spaces of his works. I want Busan to become like Barcelona and I’ll do what I can to help make it a global city.”