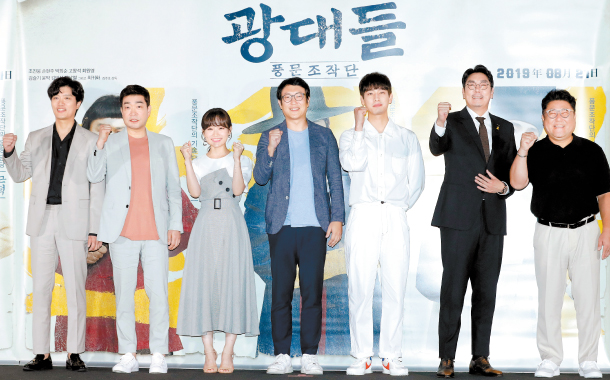 King Sejo, the seventh King of the Joseon Dynasty (1392-1910), was the first ruler in the dynasty to become a King through a coup d’etat, after he pushed his own nephew, King Danjong, out of the throne.

Due to the distinctive way he seized the throne, the King’s story has frequently been the subject of historical fiction films and dramas. The most iconic depiction of King Sejo was played by actor Lee Jung-jae in “The Face Reader” (2013). Lee’s character is a distinctly cruel prince with his eye on nothing but the throne.

“Jesters: The Game Changers,” set to be released on Wednesday, is another historical fiction about the King at the end of his reign. As its title implies, however, the story revolves around not King Sejo, but a group of five jesters who can easily deceive and trick anyone.

Duk-ho, played by Cho Jin-woong, is the leader and director of the group of jesters. Hong-chil, played by Go Chang-suk, is clever with his hands and can create any device they need. Jin Sang, played by Yoon Bak, is a talented painter in charge of creating visuals for the team. Geun-duk, portrayed by Kim Seul-ki, manages sound effects and lastly, Pal-pung, played by Kim Min-suk, nimble and agile, does the stunt work of the group.

Inspired by the Records of King Sejo in the Annals of the Joseon Dynasty, which details around 40 extraordinary phenomena that happen during the king’s reign, director Kim Ju-ho spins a tale that those wondrous events were actually illusions created by the jesters under the orders of King in an attempt to erase his image as a traitor from history and also to create a positive, stable atmosphere so that he could pass the throne on to his son.

“[In my perspective] the film was a new challenge for me because I was trying out new things that I thought were daring,” the director said at a press conference held after the press screening of the film. 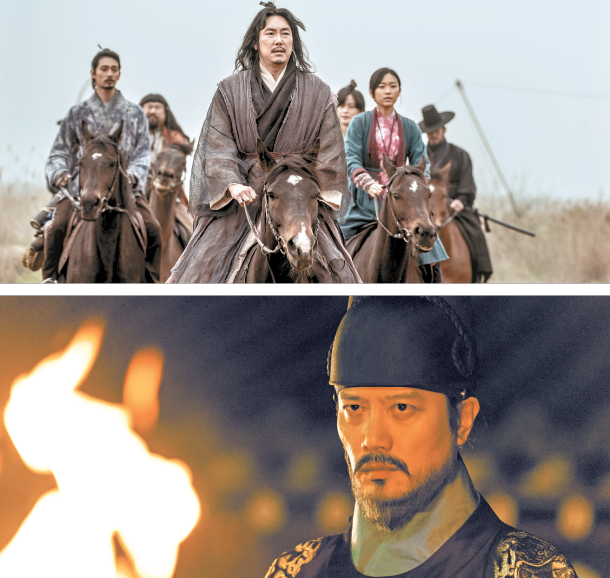 At the top, the five jesters riding their horses to complete a mission given to them under the order of King Sejo. Above, actor Park Hee-sun as King Sejo at the end of his regime. [WARNER BROTHERS KOREA]

“I did my best to visually persuade the audience that these wonders recorded in the history could actually be realized by a group of jesters.”

Kim selected several events that are well-known to the local audience. Some of these include the Jeongipumsong Pine Tree receiving its second official rank position by “miraculously lifting its branches for [a] sedan chair to pass through,” or the “golden clouds that surrounded the Wongak Temple that the King has built and showered down flower petals.”

Actor Park Hee-soon, who plays King Sejo, explained how he approached the iconic figure. “Since it was during the end of his regime, I had to portray a weak, frail side of the King that isn’t familiar to the public,” Park said. “But simultaneously, I had to show his powerful side because that is what people expect of the character. The mixture of all of these different emotions - his regrets and remorse for what he has done and also his steely determination to pass on the throne to his son - had to be expressed.”

Actors Kim Seul-ki and Yoon, who play jesters, are appearing in their first historical fiction film.

“I think the process of thinking was very different for people who lived during the Joseon era from nowadays,” Yoon said. “I focused on what a jester living at the time would think about and approached these events [like my character would].”

Cho, who’s played dark, serious roles in “The Spy Gone North” (2018) and “Believer” (2018), was excited to take on a lighter, more comedic role. “It was fun to interact with my fellow actors and bring out the funny side of Duk-ho.”

Although the director wanted the film to be humorous, he was careful not to mock the history. “Although what happened [in the past] may be considered funny or thought to be unrealistic, I wanted to respect what was written in the records and describe the events as accurately as possible. So I added bits of comedy through the process of how these jesters make the events into reality to deceive the people of Joseon,” he said.

The director also found similarities between the jesters and himself as he worked on set. “I think I’m a jester myself, living off the love I receive from the audience through my works,” Kim said. “Like them, I communicate in order to depict what I want to say in the shape of my works. In my latest film, I wanted to talk about how rulers - even the most powerful ones, like a king - seek to distort or romanticize history, because he is concerned about how he will be perceived by future generations. This tendency seems to be timeless, repeated over and over again, regardless of what eras we live in.”