Ongoing: For the first time in Korea, “Smart Concierge” service is now available at The Westin Chosun Seoul. Using the service, hotel guests can comfortably access information on restaurants, shows and exhibitions, tour programs, spa information and much more.

The Smart Concierge service is run based on data analyzed by a task force team at the hotel. The newly-introduced service provides information classified into four categories such as restaurants, tour programs, tourist attractions and accommodations. It will make it easier for overnight guests who are busy and need to get the information fast and at any time of the day. This new service is the hotel’s attempt to continue its green efforts as the Smart Concierge service replaces the paper maps previously given to guests at the concierge desk.

If guests need more guidance on the information provided by the Smart Concierge service, the hotel can offer more. The hotel staff can assist in planning how guests can mix and match different activities in one day, either in a half-day or a full-day tour. The service comes in handy for those who want to explore the food scene in Korea, as the hotel has built programs with some popular restaurants in Seoul and offers up to 10 percent discounts on the meals. 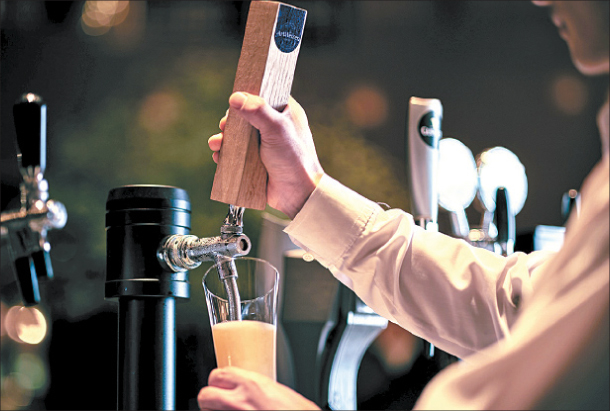 Ongoing: Grand InterContinental Seoul Parnas announced its plan to release its signature handcrafted beer “ArtWeizen,” created using artistic imagination and inspired by the hotel’s classically luxurious charm, to celebrate its 30th anniversary. The creation of ArtWeizen was led by the hotel’s mixologist, and the traditional wheat beer has strictly blended European noble hops of top quality. ArtWeizen is full-bodied, and its shade is deep gold.

ArtWeizen is served in a glass specially designed to highlight the rich and smooth flavor of ale, and the glass is long and narrow in a shape that resembles the letter “I,” the first initial of the hotel. ArtWeizen will be available at the Lobby Lounge located on the first floor of Grand InterContinental Seoul Parnas for the time being and will eventually become available at every restaurant inside the hotel except for Grand Deli.

With the release of ArtWeizen, Grand InterContinental Seoul Parnas also plans to come up with various pairings of the signature handcrafted beer with foods at its restaurants to offer different experiences for its guests.

The first food pairing will be with 100 percent organic vegan Beyond Burger, which boasts a perfect harmony with the signature handcrafted beer, and the set will be served at the Lobby Lounge. The burger is made with Beyond Meat, an organic burger patty that recreates the flavor of beef patties with proteins extracted from soybeans and mushrooms grown by eco-friendly farming methods. Everything contained in the burger, not only the patty, is organic as the buns baked by the hotel bakery are made of organic wheat flour and the burger comes with 100 percent organic vegetables.

Aug. 19 to Sept. 11: In time for Korea’s Chuseok harvest holidays, which marks gift-giving season in Korean culture, the Millennium Seoul Hilton is offering beautiful gift hampers with premium items. Millennium Seoul Hilton’s gift hampers are renowned for their high quality items. They are ideal gifts for family members and work associates and anyone else you want to show appreciation to or impress. The premium beef hampers, ranging from 350,000 to 970,000 won, offers premium-grade marbling hanwoo 1++ steaks, or U.S. prime ribs. The yellow corvina sets range from 360,000 won to 480,000 won and feature plump fish laden with roe, delicacies that were once reserved for the king’s table in the Joseon Dynasty (1392 - 1910).

Giving staycations as Chuseok gifts has become trendy, and Millennium Seoul Hilton offers a variety of room packages ranging from 350,000 to 500,000 won.