K-pop acts continue to sell record numbers of physical albums despite the popularity of digital music. From left, boy band BTS sold 3.5 million copies of its latest EP “Map of the Soul: Persona,” singer Kang Daniel sold 460,000 copies of his debut EP “Color On Me” within the first week of its release, Baekhyun of boy band Exo sold 500,000 copies of his solo debut EP “City Lights” within the first month of its release. [BIG HIT ENTERTAINMENT, ILGAN SPORTS, YONHAP]

It’s safe to say that very few people listen to CDs anymore, but when K-pop artists release a new album, their record labels are always quick to report how many thousands of physical albums they’ve sold. In an age when people don’t have CD players at home and most laptops don’t even come with a CD drive, where are all these physical albums going?

On Aug. 6, singer Kang Daniel’s fan club announced that it had donated 10,000 copies of the singer’s debut album to the Busan Blood Center, a donation worth 180 million won ($150,000), according to the fan club. The donation was made in Kang’s name, and the albums were later distributed to blood donation centers around the city.

While the fan club was praised for its “warm and philanthropic” deed by many internet users, one anonymous user posted a comment on portal site Daum’s news section criticizing the donation.

“Please don’t donate albums,” the comment said. “I’m working at a community center. We’re inundated with albums every day, and honestly, it’s impossible to deal with them all.” 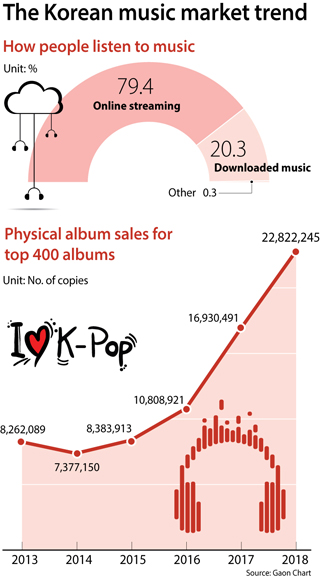 “You buy all those albums to go to your stars’ fan meeting events and then give them out to anyone saying it’s a ‘donation’ because you don’t want to just throw them away. They say donation, but honestly, all we’re given is trash. We have all kinds of albums in our center’s storage room. There’s a limit to how many we can give out to children.”

The comment was followed by other testimonies on various internet communities asking fans not to “donate” their CDs to public facilities, such as care houses or orphanages.

“The reason we can’t reject them is because we can’t refuse anything that we’re given,” said another user who identified themselves as a social worker. “We don’t get a lot of donations, and so we have to accept them because what if they donate something that we actually need? But honestly, who listens to CDs these days?”

Searching the word “album” on portal site Naver’s biggest secondhand online market brings up thousands of people selling unopened albums, while some commenters even ask whether CDs are recyclable or not.

But the rising number of CD sales has not led to an increase in CD player sales. In fact, 79.4 percent of music listeners now stream their music, while 20.3 percent download it, according to Gaon Chart.

“CD sales haven’t really had any connection to CD player sales,” said an official from ET Land, a major electronic gadget retailer. “We’re actually shrinking our CD player shelves at our stores, and manufacturers are making less as well.”

So if they’re not actually planning to listen to the CDs, why would anybody buy them?

“It’s hard to say that the increase in physical album sales is normal growth for the music industry because it’s just the same people buying multiple copies of the album,” said culture critic Ha Jae-geun. “It doesn’t account for the general public’s taste or demand.”

Kim Jin-woo, head researcher at Gaon Chart and a music data journalist, explains that the reason fans buy albums they don’t listen to is because CDs are not seen as a means of listening to music anymore but a way to meet the stars in person. K-pop fans can vie for a slot at a fan event with receipts of album purchases, which are then chosen by the agency through a random draw.

“What this means is that the more albums you buy, the higher the chance of you getting to see the star in person,” said Kim. “The entertainment agencies keep making CDs because there’s demand among fans - but that demand isn’t normal. Fans buy albums and even leave the physical CD at the shop and just take the receipt. It’s exactly the same as how J-pop fans have to buy albums to apply for a ‘handshake event’ with the stars.”

There have previously been attempts to break away from conventional CD albums. In 2017, G-Dragon of boy band Big Bang released “Kwon Ji Yong” as a USB pen drive. The five-track solo EP caused a heated debate among experts over whether it should be counted as an album. In the end, it was decided that it didn’t count as an album because the USB itself didn’t carry the tracks but linked listeners to a website that connected them to a streaming platform.

G-Dragon wasn’t the first artist to try releasing music on a pen drive. Singer Kim Jang-hoon released his album “adieu” on a pen drive in 2012, the first person to do so in Korea.

There is also a type of album called a Kihno album. Similar in size to a minidisk, these albums come as small plastic squares with a jack similar to a headphone jack sticking out of one corner. When the albums first launched in 2014, fans had to also have a Kihno player to listen to the music. These days, fans still get the physical Kihno album, but they can download the music on a mobile app instead.

But it’s not about what form albums take, according to researcher Kim.

“It’s become a form of merchandise for the fans and a marker for how popular certain stars are,” said Lee Gyu-tag, a professor of cultural studies at Mason Korea. “But right now in the music market, there’s really no way for companies to make money out of their music except through concerts. Online streaming hardly makes any money, so giving up on albums really isn’t an option. They know that physical albums aren’t necessary anymore, but it will require a lot of change and discussion among various entities to change this phenomena.”