Soma sculptures are back in the spotlight in new exhibit

Soma sculptures are back in the spotlight in new exhibit 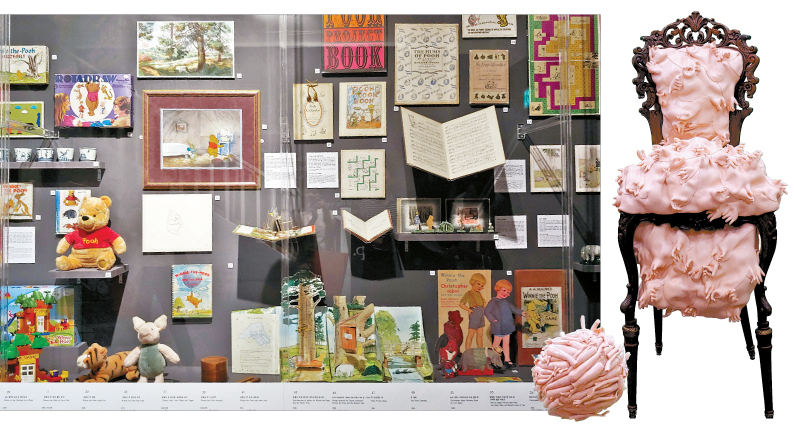 Left: Winnie the Pooh memorabilia are on display at the “Winnie the Pooh: Exploring a Classic” exhibition at the Seoul Olympic Museum of Art in southern Seoul. Right: “Lump” (2019) by Min Jung-soo is a collection of chairs and frames embedded with plastic hands and feet displayed at “Pieces_Sculpture.” [KIM EUN-JIN]

For Korea, the 1988 Seoul Olympics were an important way to show the world the fruits of its fast economic development after the Korean War (1950-53).

Besides infrastructure, the government made major investments in the creation of art and cultural spaces to present Seoul as a global city.

One of its major projects was Seoul Olympic Park and the Seoul Olympic Museum of Art (Soma) in Songpa District, southern Seoul. To attract art from around the world, multiple symposiums were held, inviting over 150 artists, who submitted sculptures that would later be displayed in the museum’s vast grassy spaces to commemorate Korea’s first Olympic Games.

Three decades later, Soma, operated by the Korea Sports Promotion Foundation, has launched a special exhibition to highlight the sculptures that the museum has kept since the Olympics and bring attention to this cultural legacy that not many Koreans know about.

The “Pieces_Sculpture” exhibition spotlights new and existing works both inside and outside the museum. On display outside are eight original sculptures made in the 1980s, plus eight more recent works.

For example, “Seven Experiments to Keep the Balance” (1987) by German sculptor Michael Schoenholtz is made up of marble pieces intended to symbolize the many attempts gone into finding balance in abstract sculpture. Kwon Jae-hyun’s “Marginal Man” (2019), placed right next to it, is intended to be an interpretation of Schoenholtz’s work using human figures and their body language to express different emotions like joy, anger, sorrow and pleasure.

Works showcased inside include Lego structures of cats and the symbolic World Peace Gate built for the Olympics by Wani Kim, the first Korean Lego Certified Professional. Other structures also feature use of diverse materials including aluminum, copper and wood.

Ticket holders of the exhibit gain access to “Into Drawing 39: Dogs without Leash,” an exhibition featuring over 60 works by graffiti artist GR1. Notable works in the artist’s “Seoulscape” series include black and white drawings of old buildings covered in graffiti.

Visitors should also note that a separate space within the museum is now hosting the “Winnie the Pooh: Exploring a Classic” touring exhibition that kicked off at the Victoria and Albert Museum in London, Britain in 2017.

The exhibition is the largest to date about the beloved bear character created in 1926 by author A.A. Milne and illustrator E.H. Shepard. The show features original sketches, Winnie the Pooh books translated into different languages and teddy bears believed to have been the inspiration for the famous character’s look.