Korea will have the oldest population in 2045

Korea will have the oldest population in 2045 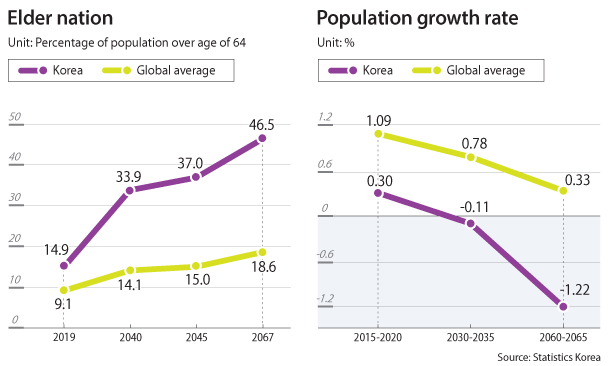 Korea will have the largest proportion of elderly people in the world in less than three decades if demographic trends continue, as they are expected to.

Statistics Korea reported Monday that the proportion of individuals aged over 64 in the total population will reach 37.0 percent in 2045, and that will be the highest in the world. The country will take over the title from Japan, where the elderly will account for 36.7 percent of its population that year.

Korea’s share of the elderly will continue to grow and reach 46.5 percent in 2067 compared to a global average of 18.6 percent, according to the statistics agency’s report that analyzed United Nations data from 201 countries.

Korea is currently labeled as an “aged society,” defined by the UN as a society in which the population aged 65 or older exceeds 14 percent of the total population. While it took 24 years for Japan to transition to an aged society, from 1970 to 1994, Korea achieved the same from 2000 to 2017 - in 17 years.

As of this year, the elderly represents 14.9 percent of Korea’s total population.

While the economically productive population, or those aged 15 to 64, accounts for 72.7 percent of the total this year, that group will account for less than the elderly population in 2067 at 45.4 percent.

The demographic shifts are a result of the country’s struggle with record-low fertility rates.

The total fertility rate is the average number of children who women aged 15 to 49 bear.

The statistic for Korea is more alarming when considering just last year, the rate fell below one to reach 0.98.

While the country’s total fertility rate stood at 4.21 from 1970 to 1975, it has declined in parallel with Korea’s economic development. To maintain its current population, Korea’s fertility rate needs to be at 2.1 or above - the rate at which couples basically replace themselves with children.

The decline in the fertility rate leads to a shrinking population.

The statistics agency said that Korea’s population is expected to fall by a quarter of its current size in five decades.

Exports expected to stay strong in second half