Scenes from “Monsieur Mayonnaise” (2016), left, “Food Fighter” (2018), center, and “Funke” (2018), right, all of which are scheduled to be screened for fans of food-centered films during the Seoul International Food Film Festival starting today. The event, which runs until Wednesday, also offers panels with food industry experts after some of the movie screenings. [SEOUL INTERNATIONAL FOOD FILM FESTIVAL]

Seoul International Food Film Festival is back this weekend for movie fans who love to eat. The festival encourages people to talk about the food they love in events with food experts in Korea, ranging from Michelin-starred chefs to Korean liquor masters. Some of the movie screenings even come with a chance to eat food.

The opening of the festival will inspire people to think about how much they waste. Opening film “Food Fighter” (2018), by director Dan Goldberg, features Ronni Kahn from Australia who established Oz Harvest, a charity that “rescues” food from being wasted. She is not only looking to minimize the food waste, but also looking for ways to make the most use out of the ingredients left over at restaurants or after events. The documentary features Kahn traveling to four different continents over the course of two years meeting with companies, including supermarkets, airlines and cafeterias, to raise awareness about food waste. 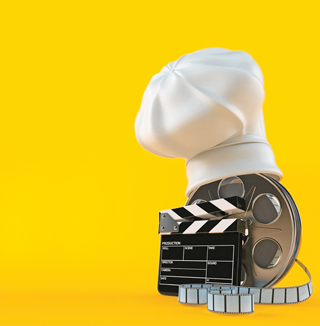 The films touch on many aspects of the food industry that many may not have considered in their daily lives. Some are about the history of certain wines, while others are about the food served during festive occasions in Korea.

The scheduled talks following some of the movie screenings are another reason to attend the festival. The panels feature not only movie directors and critics, but also foodies, food critics and others working in the food industry. Chef Park Jong-sook, who specializes in passing down traditional Korean food from decades ago, will be joining the talk taking place after the movie “The Wedding Day” (1956) at Daehan Cinema, in central Seoul, while Joo Young-ha, who studies food and food culture, will speak after a screening of the film “Rice” (1963).

Barista Lee Cheol-ha will share his ideas on coffee after “The Coffee Man” (2016) at Seoul Namsan Gugakdang, in central Seoul, and sommelier Choi Jeong-wook, who specializes in wines made in Korea, will talk about wine after “Chateau Chunder: A Wine Revolution” (2012). Michelin-starred chef Lee Jun of Soigne in southern Seoul will talk about pasta after “Funke” (2018).

Even the president of the Marine Biodiversity Institute of Korea will take part to talk about underwater resources after a screening of “Artifishal” (2019) on Sunday at Daehan Cinema to help guests get a more extensive understanding of the food industry and where ingredients come from and are being developed. 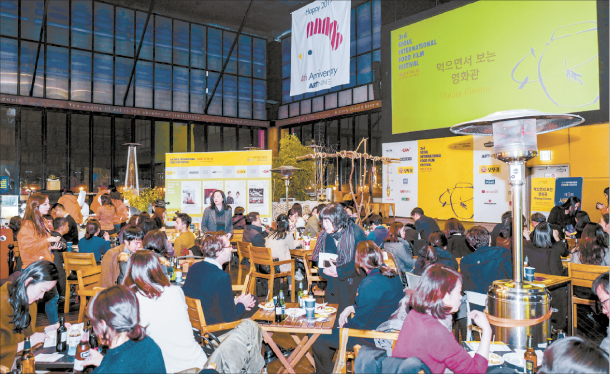 Visitors to the Seoul International Food Film Festival will have a chance to eat and watch a movie outside the Seoul Gugakdang or Daehan Cinema in central Seoul. [SEOUL INTERNATIONAL FOOD FILM FESTIVAL]

Does a day spent watching movies about food and talking about food sound like too much to bear without anything to eat? The festival offers so-called dining cinema options to those who want to do everything at the same time. In the courtyard of Seoul Namsan Gugakdang, chef Lee Seung-jun of French restaurant Hulotte in southern Seoul will prepare something savory to enjoy with beer and wine while watching a screening of the movie “C’est la Vie!” (2017) to make it more entertaining. Chef Hong Shin-ae of restaurant Salt in southern Seoul will prepare Korean food and traditional Korean liquor to make the scenes of the movie “The Wedding Day” more vivid on the rooftop of Daehan Cinema. The seats for the outdoor screening are not assigned and are provided on a first come first served basis.

There is one dining cinema event at these two venues each day from Sept. 8 to 10. The screenings on Sept. 7 have been canceled due to the expected heavy rainfall and wind.

The Seoul International Food Film Festival is held mostly at Seoul Namsan Gugakdang and Daehan Cinema in Jung District, central Seoul, from today to Sept. 11. The general screening is 7,000 won ($5.84), and dining cinema ranges from 15,000 won to 30,000 won. For more detailed information about the festival and the movie timetable, go to www.sifff.kr or call (070) 5102-7931.