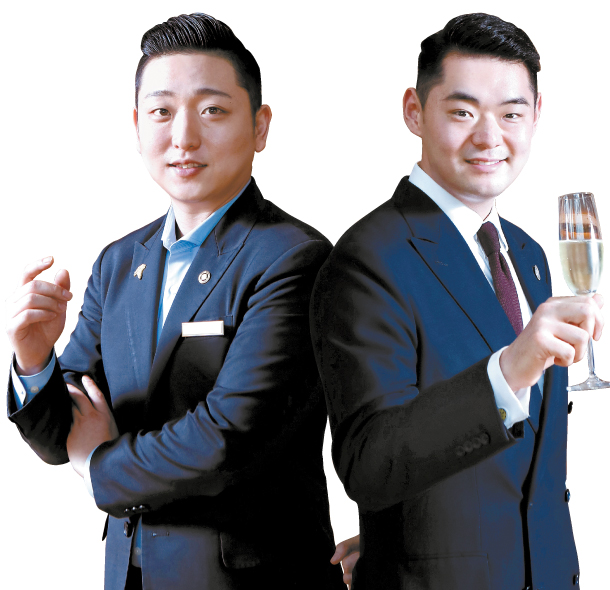 Sommelier Kim Seong-kook of the Conrad Seoul, also known as Nathan Kim to many, left, poses with sommelier Paul Lee, right. Lee is competing in the upcoming Young Sommelier Competition representing Korea while Kim, a competitor in the 2016 event, is attending this year’s competition as a judge. [PARK SANG-MOON]

Young talents hoping to one day lead the world of beverages gathered in Seoul for the Young Sommelier Competition today and Saturday, which is being hosted in Korea for the first time. A total of 12 sommeliers from all around the world, who earned their spots through regional competitions, are competing for the title of world’s top young sommelier. The competition will be held in the Grand Hilton Seoul, in Seodaemun District, northwestern Seoul, with the three sommeliers who get through the preliminary round today advancing to the final round on Saturday.

Korea has sommelier Paul Lee of French bistro Tavern 38 looking to show off his skills. This year’s competition is doubly special with Kim Seong-kook, also known as Nathan Kim, of the Conrad Seoul acting as a judge after competing in the competition himself in 2016. Kim will also be honored as Maitre Sommelier by Chaine des Rotisseurs, an international association of gastronomy that organizes the competition every year, to welcome Kim as a regular member.

It has not been that long since 27-year-old Korean-American Lee got entwined in the world of wine. It was around March 2016 when he started working at a restaurant soon after he came to Korea. Initially he wanted to learn how to cook but after spending some time in the front of the house during his short visit to San Francisco and asking sommeliers about wine, his “obsession” started, and he decided to stay working in the dining room rather than the kitchen.

“It was less about wine and more about being an expert at something,” said Lee, explaining how he got into the profession of being a sommelier and what drives him to be better at it. “I had a problem of being interested in many things like robots, fashion, math, cooking and such, and my aunt, a big mentor for me, said just pick something, stick with it and become the best so that people from other fields would come looking for me.”

“This is the perfect time to show my Korean side to the world,” said Lee. “If I were a U.S. competitor, I [might have taken myself] as an individual entering the competition, but as a Korean representative, the burden is increased to showcase what Korean sommeliers have.”

Kim, with experience as a previous contender, is going to check how each sommelier leads the customers and the ambience of the restaurant overall, rather than focusing on minor details to reveal the competitor’s level of technical knowledge.

The Korea JoongAng Daily, prior to the competition, sat down with the two sommeliers to talk further about their take on the competition and their ideas to make the nation’s beverage industry flourish in the future. 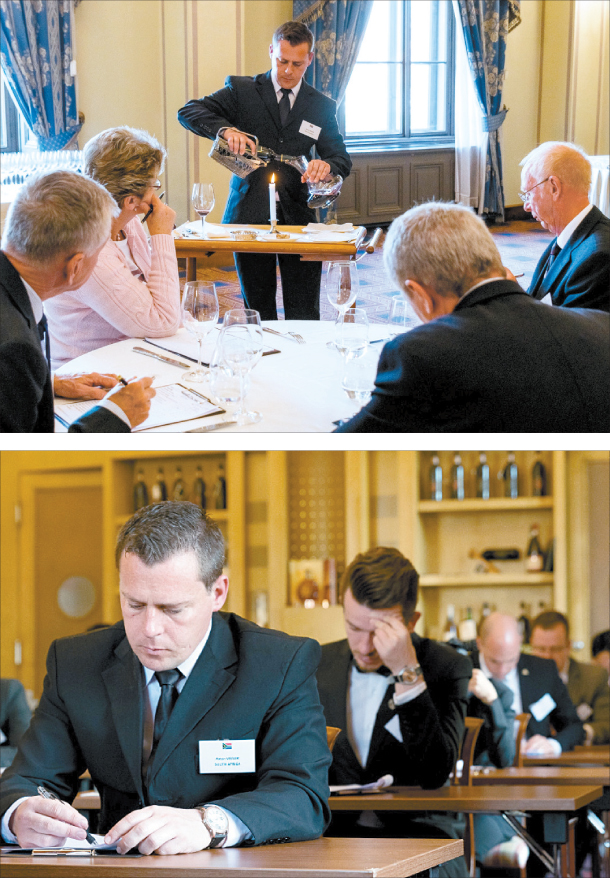 Young sommeliers under the age of 30 from all around the globe compete in the Young Sommelier Competition. The final round is happening in Korea this year on Saturday. The above photos are from the competition in 2017 in Budapest. [CHAINE DES ROTISSEURS]

Q.What are the things you learned while preparing for this competition?

Kim: When I entered the competition myself in 2016, I thought I had enough experience to be called a sommelier rather than a young sommelier with less experience. But I felt like I was the youngest sommelier among those competing. The level of information contenders have regarding wine and service was something I couldn’t even imagine.

Lee: It’s nice to have many sommeliers helping. When entering local competitions, we compete against each other so we have less outside help. But with the international competition, many throw me test questions at any time, even casually through a mobile messenger, and help me with mock exams.

How beneficial is this competition in terms of making a global network?

Kim: The contenders from 2016 are all connected through social media, and when they visit me in Korea or I visit some of them in Bangkok for example, we meet up and talk about the news in the wine industry. Once every two months I also try to open a web conference to talk about wine.

Lee: Being in the competition is less about getting first place. These are the 11 best young sommeliers in the world right now. These are people who I’m going to bump into quite often throughout my career as a sommelier. So it’s best to be friendly with all of them.

What are the things you can do to make Korea’s wine industry better?

Lee: The industry is still in its baby phase. Having more knowledgeable people working in Korea is definitely going to be beneficial.

Kim: I’m so happy to see this international event in Korea for the first time and thankful that I can participate as a judge. I hope this is the first stepping stone to increase the awareness of the roles of sommeliers in the dining industry as well as focus more attention on beverages because, as of right now, chefs are [shown] more. Sommeliers need to have good story telling skills to deliver the creations from the chef to a level where customers naturally start to recognize such work from service staff.

What do you think sommeliers should do?

Kim: My motto is to be a messenger. Sommeliers need to be able to come up with plans so that customers can enjoy whatever events are prepared for that day at the restaurant or bar. Until last year, I thought it was important for me to be a specialist, but now I’m trying more to be like a generalist who can help foster younger sommeliers so that they can become specialists in wine. I need to keep this position so that I can inspire people to think that sommeliers are people the general public can approach easily. Being the best sommelier is important, but also you need to know how to motivate young sommeliers so that they can become better.

What things do you want to do more of in the future?

Lee: I want to have a group of people meeting every week and a long-term study program that is not just to prepare for exams. I have not worked as a sommelier overseas so I want to do that. My plan is, once I finish the Master Sommelier program, if I finish, to come back and to use my credentials for a good cause. I want to be the wine Baek Jong-won. Wine connoisseurs don’t need us. They know way more about whatever style of wine they are passionate about. But [for] the general public, they don’t know too much about wine here because wine is a foreign beverage and something more expensive than others. I think Korea will definitely see more people drinking wine and more wines being made in Korea. It doesn’t have to be just about wine. It can be about being better educated about what you put in your mouth. Just like Baek Jong-won did, I want to market [ideas] to a broader audience and have more people educated about gastronomy.

Kim: My goal is to supply high-quality bars with fine selection of wines while also running supermarket-like outlets to cater to beginners as well.

The final competition on Saturday is open for anyone who wishes to see how sommeliers perform under pressure. The semifinals are not open to the public. Go to Winevision Academy’s website winevision.kr to sign up. Semi-formal attire required. It is free to sign up. The final round starts at 10 a.m. and is expected to end at 1 p.m.