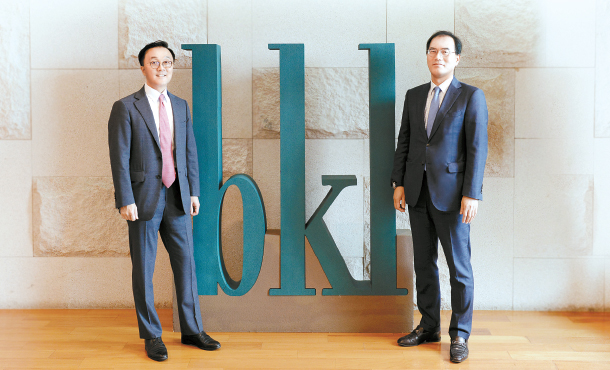 Partners Sky Yang, left, and Ri Bong Han from Bae, Kim & Lee LLC, a global law firm in Korea, have spent years working with foreign law firms in Korea and understand the unique subtleties of the legal market here in comparison to other countries. [BKL]

Thousands of foreign lawyers arrived in Korea this week to attend the International Bar Association (IBA) Annual Conference, landing in a country that has the 12th largest GDP in the world, according to the World Bank.

Yet of the numerous foreign law firms that have established branches in Korea, some have gone on to withdraw. Ri Bong Han and Sky Yang, partners at Bae, Kim & Lee LLC (BKL), one of Korea’s leading law firms, argue that those examples reflect both the attractiveness and the complexity of the local legal market.

Han, who is in charge of coordination of foreign client matters at BKL and specializes in mergers and acquisitions (M&A), has guided foreign law firms and clients into the Korean legal market through close collaboration. Yang, as head of BKL’s Corporate Practice Group, has considerable knowledge about the legal market, both domestically and internationally, and led the organizing committee of BKL for the IBA Annual Conference in Seoul.

“Through the Korea-EU Free Trade Agreement in 2012 and the Korea-U.S. Free Trade Agreement, a number of foreign law firms have entered the Korean legal market, but it is hard to say that the market is fully open,” said Han. “Foreign law firms are required to set up a joint venture in Korea before providing advisory services on Korean laws and hiring Korean attorneys, with shareholding limited at 49 percent.

“Foreign law firms typically offer legal services to companies and financial institutions regarding cross border transactions or dispute resolutions in foreign countries. However, over 30 foreign law firms are in a fierce competition in the market, raising concerns over profitability.”

Yang also highlighted the difference between the services offered by local and foreign firms.

“Foreign law firms tend to provide legal services based on mutual business understanding built upon longstanding relationships with clients,” said Yang. “A majority of Korean companies, on the contrary, prefer to seek legal services from several well-known law firms who have worked with other Korean companies on similar matters, and are generally more sensitive about the legal service fee, which makes it harder for foreign law firms, who have smaller pool of Korean clients, to expand their services in Korea.”

Korea is still in a period of economic growth, and it is important to provide efficient services after analyzing the needs of the client and the development of the local legal industry.

Next year marks the 40th anniversary of BKL, which has developed in line with Korea’s rapid economic growth. During the Asian Financial Crisis, BKL completed historic deals such as the sale of Hyundai Engineering & Construction, acquisition of Korea Exchange Bank and Korea Electric Power Corporation’s nuclear power plant project in the United Arab Emirates. In this process, BKL has been able to acquire unparalleled experience and know-how.

“During the Asian Financial Crisis, when a huge wave of M&A deals took place, BKL was a pioneer in dealing with landmark projects regarding restructuring, privatization, inbound and outbound investments and developing various M&A techniques, such as acquisition finance and leverage buyouts,” said Yang.

Yang played a key role in completing high-profile M&A transactions during that period.

“Recently in Korea, compliance issues have been raised in a number of areas, including tax, antitrust and competition, privacy issues and labor,” said Han.

“Since legal issues may arise any time, it has become more important for corporations to select a law firm that provides comprehensive solutions and services, including advice on corporate, litigation, tax and other matters.”

Foreign companies often complain about the difficulties in entering the Korean market and operating their businesses due to tightening regulations. BKL, which has long been considered a top expert in litigation cases, has also played a leading role by not only representing multinational companies in courtrooms but also offering consulting services to them when they break into new markets.

“Understanding overseas business, having a diverse network and having experience working with multinational companies and dealing with international disputes are all important factors for law firms in Korea,” said Han.

“BKL provides a one-stop service for clients based on efficient internal collaboration. In diverse fields such as M&A, dispute resolution and compliance, BKL has successfully collaborated with foreign law firms, making it a trusted partner among overseas firms.”

Korea is considered a hub in Asia in terms of its geography and economy, serving as a model for neighboring developing countries. For international law firms looking for a foothold in the region, an office in Korea could become a cornerstone for expanding cross-border legal practice in Southeast Asia and the Middle East.

“Through this network, BKL serves as the most reliable partner to companies that are looking to invest or expand their business not only in Korea but also in other parts of Asia.”

“A number of legal experts who are considered as opinion leaders globally will attend the IBA Seoul Annual Conference,” said Yang. “It should be a great opportunity for us to allow them to experience Korea and to promote the excellence of legislation and the competitiveness of legal professionals in Korea.”