Telling authentic stories amid the artificial landscape of ‘Palm Springs’

Telling authentic stories amid the artificial landscape of ‘Palm Springs’ 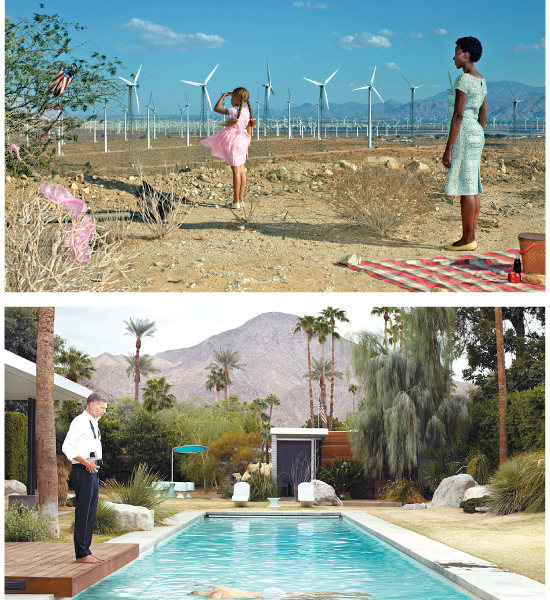 Dutch photographer Erwin Olaf has much to celebrate this year.

He turned 60 years old, was named a knight in the Order of the Netherlands Lion and just wrapped an exhibition at the Dutch national museum Rijksmuseum, where twelve of his works were displayed alongside classics by Dutch masters including Rembrandt.

Gallery Kong in central Seoul is spotlighting the acclaimed artist in Seoul this year as well, displaying pieces from Olaf’s “Palm Springs” (2018) series and selected pieces.

Although the resort city in California is often associated with Hollywood glamor and luxurious villas, Olaf, who began his career as a photojournalist, decided to explore the social and environmental problems plaguing the region with the project.

“The Bank, Successor” and “The Worker” addresses the United States’ racial wealth gap. In the former, a blonde boy dressed up in a suit sits on a large office chair in apparent anticipation of inheriting his parents’ business, while the latter shows a black man over twice the boy’s age waiting for his clothes at a laundromat, presumably because he cannot afford a laundry machine at home. Likewise, “The Kite” presents a black girl and her mother having a picnic out in the sandy deserts of Palm Springs, a far cry away from the extravagant vacations by the pool side or golf courses that Hollywood stars are pictured having in the media.

“American Dream, Self-Portrait with Alex” (2018) speaks on environmental degradation. A take on David Hockney’s “Pool with Two Figures” (1972), it depicts a man observing another in the pool. But unlike Hockney’s work, Olaf’s version features a gloomy, arid landscape of dying grass and greyish mountains, and the man in the water appears to be floating lifeless in the pool.

“Our production team suggested painting the lawn green […] but that’s not what I wanted,” Olaf explained in a statement.

“The dying grass in the perfectly artificial Palm Springs strikes up something painful in the heart.”

Besides “Palm Springs,” two black-and-white works showcased in the recent Rijksmuseum exhibition are also on display at Gallery Kong. They are “La Penseuse” (1987), a nude portrait of a woman, and “Ladies Hats, Hennie” (1985), which were each presented in dialogue with Rembrandt’s “Nude Woman” (1629-1633) and a self-portrait from 1628.

“The Troubled” (2016) is another important work on display. The screen display zooms into the theatrical expressions of people of different races and ages who were asked to “express the pain and emotions that one feels after hearing the stories and seeing the images of terrorist attacks on innocent people” after the attacks in Paris in November 2015.