Are we slowly edging toward a ‘new dark age’?: Exhibit presents a dystopian future from view of artists, writers

Are we slowly edging toward a ‘new dark age’?: Exhibit presents a dystopian future from view of artists, writers 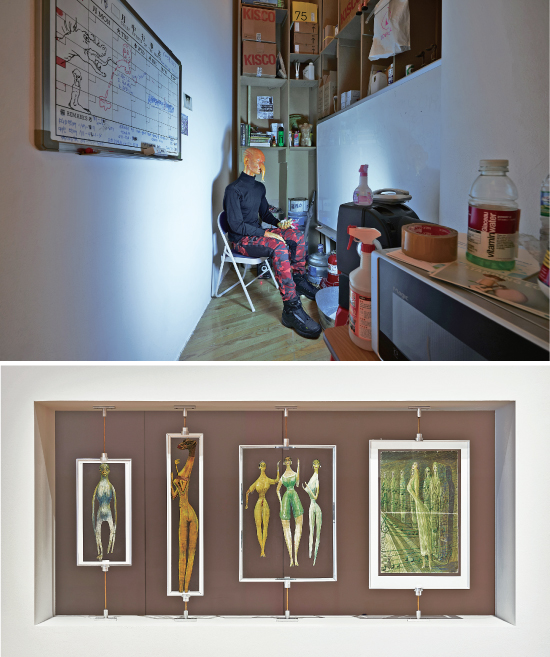 “All bleeding stops eventually” (2019) by Will Benedict and Steffen Jorgensen, top, and untitled works by Danish artist Ovartaci, above, are currently on view at “iwillmedievalfutureyou1,” being held at the Art Sonje Center in central Seoul. [ART SONJE CENTER]

The Middle Ages were a dark and unpleasant time, marked by violence, illness and lawlessness.

“Five, six years ago I started thinking about this exhibition - how advanced our culture is, but at the same time, how primitive and simple we are,” said Jacob Fabricius, the exhibition’s curator and artistic director at Kunsthal Aarhus arts center in Denmark.

“There was the war in Syria where a lot of atrocities happened. In Europe, we accepted that there were drones killing a lot of people dropping bombs, but then we were completely devastated when somebody had their head slit open. There’s the absurdity of violence.” 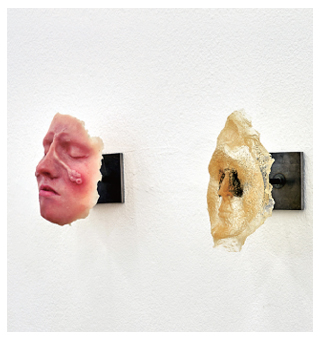 Currently ongoing at the Art Sonje Center in central Seoul, “iwillmedievalfutureyou1” features works from 20 global artists and science fiction writers touching on medieval or primitive and disruptive elements of the human condition that seem to usher in a “new dark age.” It is the fourth installation of an exhibition series that started back in 2016 in Denmark with “iwillmedievalfutureyou4” - the unusual numbering takes after the sequence of the Star Wars films.

The exhibition isn’t for the faint of heart. Two life-sized cutouts of a smiling man and woman greet visitors from the show’s entrance on the second floor, each with gaping holes in their stomachs as if they’ve been shot.

These pieces, along with a video installation showing an actual association of medieval swordsmanship in Seoul, were created by Korean artist Yun Choi, who drew on the similarities between the exhibition’s title and “I SEOUL U,” the promotion slogan of the Seoul Metropolitan Government.

“My works focus on how Europe’s medieval age is expressed in Seoul. For this project, I worked with people who practice medieval swordsmanship under the bridges of the Han River as well as game designers in Pangyo’s techno valley who create Medieval characters.”

If Choi’s video highlights a medieval tradition that many aspire to continue even today, other works on the second floor feature grotesque expressions of something primitive that provokes a visceral reaction. Located in the middle of the room is a giant mechanical sculpture by Mira Lee titled “The Complicits” (2019), which endlessly turns and twists as water and tissue-like substances fall from its body. This eerie sight is complemented by an equally disturbing artificial voice from Danish artist Sidsel Meineche Hansen’s “Control Room #1” (2018), which recites excerpts from the combined texts of English futurist philosopher Max More and black metal band Mayhem’s late lead singer Per Ohlin, who both discussed a return to eternal life.

The third floor hosts the bulk of works on display, many of which imagine a dystopian future in reference to acts of past or ongoing human destruction and cruelty.

Seats are available for viewers to immerse themselves in a fascinating six-episode series “The Restaurant” (2018-2019) by American and Danish duo Will Benedict and Steffen Jorgensen.

This apocalyptic cooking show, whose protagonist is a half-man, half-snail, brings awareness to social problems like humans’ excessive consumption and overreliance on the Internet, even for something as fundamental as making food.

Similarly, American artist Lynn Hershman Leeson’s wallpaper “GMO Animals, Crops, Labs” (2014) critiques human interference in nature through a comprehensive overview of manipulated or modified plants and animals, which were at the time of their creation most likely touted as great scientific achievements. A particularly jarring animation by Magnus Wallin titled “EXIT” (1997) sheds light on how savage humans can become for their own needs or pleasure. The video features physically disabled people struggling to escape a wall of fire closing in on them as crowds go wild every time a victim is immolated.

For visitors who are willing to stomach the gruesome imagery and accept mankind’s faults, “iwillmedievalfutureyou1” offers a lot to chew on.