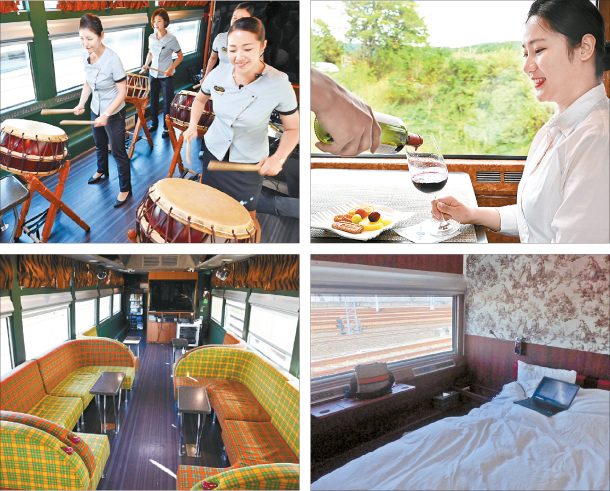 Top: Staff on board the cruise train Haerang, left, provide entertainment for guests, as well as food and wine, right. Above: A lounge inside the cruise train where guests can relax, left, and the sleeping car, right. [KORAIL]

GUNSAN, North Jeolla - It is easy to assume that Korea is not large enough for one to enjoy an overnight train ride during their travels across the country. Yet Haerang, a so-called rail cruise with eating and sleeping options, offers travelers a ways to see the country in style.

The train, established in 2008, was intended to be used to take athletes and fans from Korea to the Beijing Olympics. The South Korean government spent about 7.8 billion won ($6.5 million) to modify some trains so that they would be able to run through North Korea to get to China, but due to changes in inter-Korean relations, the train was never used as it was intended. It was later decided that the trains - which feature sleeping cars, dining cars and a communal area - would be used to give tourists train travel moments that they may have experienced in other countries.

For over 10 years, the train has had a steady stream of customers filling up about 70 percent of the available seats every time the rail cruise takes people to cities around the country. It is particularly popular with families who wish to travel either with senior citizens or children, or group travelers coming from overseas. One Japanese customer had taken the train 14 times since it started operation and had developed a close friendship with train attendants, even attending some of their weddings.

Currently, the train offers three different options. One takes travelers across the country for three days, while the other two programs last two days. The three-day package takes people from Seoul to South Jeolla’s Suncheon, Busan, North Gyeongsang’s Gyeongju, and then continues to the East coast of the country to Jeongdongjin, Donghae and Taebaek in Gangwon before heading back to Seoul. The other two packages take guests to either the east or the west coasts. The west coast trip goes to North Jeolla’s Jeonju, South Jeolla’s Suncheon, South Chungcheong’s Seocheon and North Jeolla’s Gunsan. 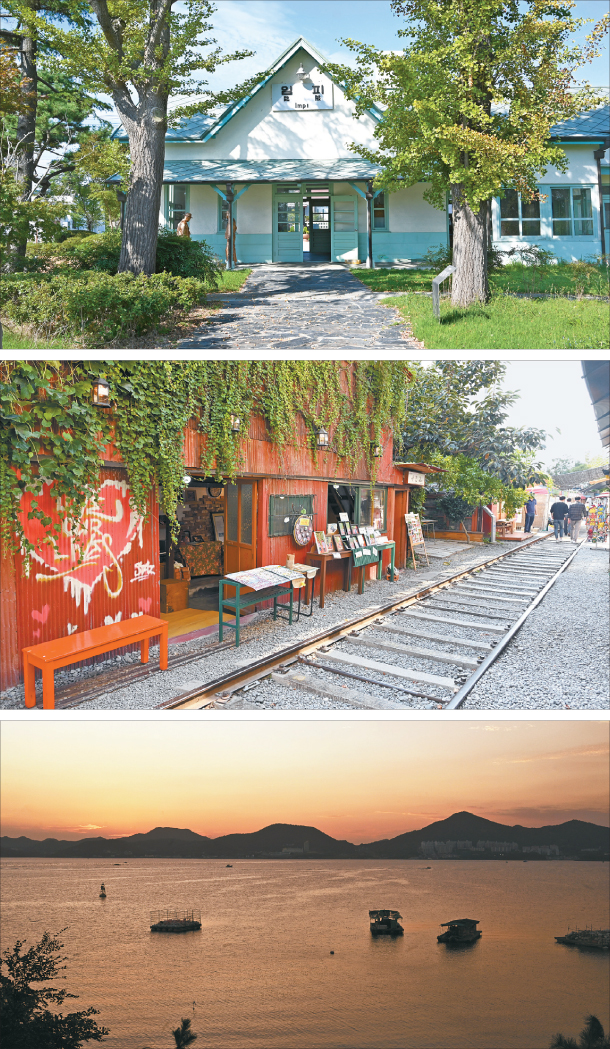 The cruise train Haerang offers two-day and three-day travel packages with sleeping cars on the train. Excursions are provided in the cities the train passes through, such as Gunsan’s Impi station, top, Railroad Town, middle, or Yeosu, above. [KORAIL]

Since the cruise rail aims to provide full-service travel, one train fits only about 54 people on board at a time. There are only two modified trains for Haerang, and the other one houses a little bit more to serve up to 72 people. Deluxe rooms have one large bed for two and a bathroom with a private shower. The room isn’t too big and the bathroom isn’t fancy, but since the option is not available on any other trains in Korea, it feels very unique.

Once you’re on the train, everything is taken care of, so you don’t need to worry about planning your trip. All the meals and drinks on the train, as well as snacks, entertainment programs on the train, bus rides to sightseeing spots and guided tours are provided, freeing you from having to worry about logistics so that you can focus more on spending time with family.

The on-train entertainment includes musical performances, magic tricks and quiz games. Staff on board are not only there to listen to your needs but also to provide multiple entertainment programs. Around four staff members will join you on the sightseeing trips and cater to you on the train to make the overall travel experience more comfortable. 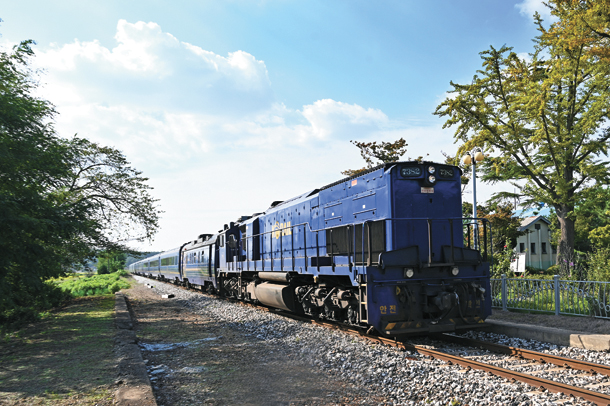 To improve the experience even more, the operator Korail is planning to inject more investment, estimated to be around 170 billion won, by 2024 to really enhance the train’s luxurious features and improve the service.

Besides its regular trips, some special routes are offered each season as well. Later this month and in November when the leaves change color, a fall foliage course that takes people to North Chungcheong’s Danyang, North Gyeongsang’s Andong, Daegu and Cheongdo, and South Jeolla’s Suncheon will be offered, so that riders can get to experience the season fully. These seasonal routes are generally more popular than the regular programs and get sold out quite quickly, according to staff. The fall foliage train leaves Seoul Station on Oct. 22, Nov. 5 and 12.

For excursions, Gunsan’s Gyeongamdong Railroad Town is quite popular for those who want to walk alongside the railway. The town has reformed the railway that’s no longer in use for people to stroll around. Shops sell nostalgic items from the late 1900s, and it is easy to see some people wearing rented school uniforms and taking photos. Little props and toys that those now in their 30s used to play with are sold there as well.

Depending on the route, the train sometimes takes you to an old station that has been designated as a cultural heritage site and is no longer in use, or out to Yeosu to see the night view of the South Sea.

For more information about the rail cruise Haerang, go to railcruise.co.kr or call 1544-7755 from 9 a.m. to 6 p.m. on weekdays except Saturdays, Sundays and national holidays. For more general travel information around Korea, call 1330, a travel hot line that’s available 24 hours everyday in four different languages including Korean, English, Chinese and Japanese.