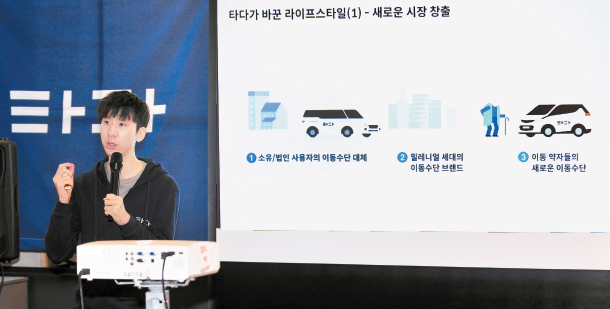 Tension between rental van-hailing service Tada and the government escalated on Monday after Tada announced it will expand its number of vans to 10,000 by next year.

“The number of Tada subscribers surpassed 1.25 million in a year since the service was launched in October last year, while the number of vehicles and drivers has increased to 1,400 and 9,000, respectively,” said Park Jae-wook, CEO of Value Creators & Company (VCNC) at a press event held in Seongsu-dong in eastern Seoul on Monday to celebrate the first anniversary of Tada’s launch.

Following the press event, the Ministry of Land, Infrastructure and Transport said in a statement that Tada’s plan was “inappropriate” and that it could bring controversy over the service back to “square one and reproduce social conflict.”

The Land Ministry in July said it was proposing changes to laws to permit licenses to ride-hailing operators. Part of the changes includes the government’s control over the number of taxis that could be operated by mobility platform providers. The ministry plans to take administrative procedures by the end of the year.

Despite protests from taxi drivers, Tada has seen rapid growth over the past year by meeting apparently high demand in the mornings and nighttimes with Kia Carnival vans that can carry 11 people at once.

It is operated by VCNC, a subsidiary of car-sharing app SoCar.

Apart from increasing the number of its vehicles, the company at the press event said it will expand its service outside the metropolitan areas. It currently operates in 49 districts and cities.

Over the past year, Tada saw an average of more than 10,000 users per month and drove a total of 35.5 million kilometers (20.8 million miles) total - the equivalent of going around the earth 886 times, according to Tada.

It improved the efficiency of the business through the use of data and artificial intelligence (AI), the company said. It claimed it reduced the estimated time of arrival by 26 percent and raised the number of calls per car by 113 percent.

Tada said it is able to contribute to job creation, especially for young people under the age of 45. More than half of Tada’s drivers are younger than 45, according to the firm.

The average monthly salary of a Tada driver who worked 10 hours a day for 25 days was 3.13 million won ($2,800), according to the mobility platform. Tada drivers are paid by the hour, and drivers with good customer reviews are paid more. Tada hopes to hire more drivers by offering more benefits. Tada currently offers its drivers cut-rate loans in collaboration with KEB Hana Bank.

Tada will be facing competition from Kakao T Venti, Kakao’s upcoming van-hailing service that will be run in collaboration with taxi corporations. The service is expected to start this month.