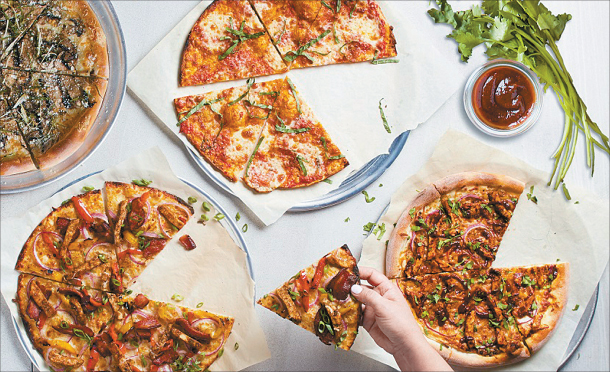 California Pizza Kitchen has introduced pizzas made with cauliflower dough in Korea to cater to customers with dietary restrictions. [CALIFORNIA PIZZA KITCHEN]

While some chefs work to bring authentic Italian-style pizza to Korea, others try to perfect the tastes that are more popular in the United States at their local pizza shops. For California Pizza Kitchen, which has been in Korea for about 12 years, the goal is to allow everyone to enjoy their pizza offerings. The chain has just rolled out pizzas made with gluten-free cauliflower crust to better cater to diners with dietary restrictions.

The dough made with cauliflower, mozzarella cheese, rice powder, herbs and more became available in the United States last year and is making its way around the world this year. The texture and taste isn’t too different from the crust of any other ordinary pizza, yet some may notice a cheesier flavor. The company said that it is not only beneficial to customers sensitive to gluten, but it is also good news to those trying to eat more vegetables. Sales of the vegetarian dough now make up 13 percent of the company’s sales in the United States, giving the company the green light to continuously check what consumers want and even educate them about what’s available in the market, said California Pizza Kitchen CEO Jim Hyatt during his visit to Seoul last month.

Pizzas whose dough can be substituted with cauliflower crust are marked on the menu at 10 branches in Korea, including locations at Lotte World Mall in Songpa District and Coex in Gangnam District in southern Seoul, as well as at I-Park Mall in Yongsan District in central Seoul. Besides dishes you can find at any location worldwide, there are some menu items that have been developed to fit local consumers’ preferences, including seafood nurungji pasta. The dish includes nurungji, which is crunchy rice, in a bowl of pasta made with a spicy tomato sauce.

In line with its attempts to provide options for those with dietary restrictions, the company also is in the process of making a vegan pizza. After some time hunting down the right vegan cheese, the company is optimistic about introducing a new option soon. It is also thinking about opening more branches in Korea, possibly outside of Seoul.

To celebrate its 12 year anniversary, those who post about their California Pizza Kitchen experience on social media will get 30 percent off of any drink orders. Other promotions are also ongoing and can be found on the company’s Instagram account @cpkkorea.