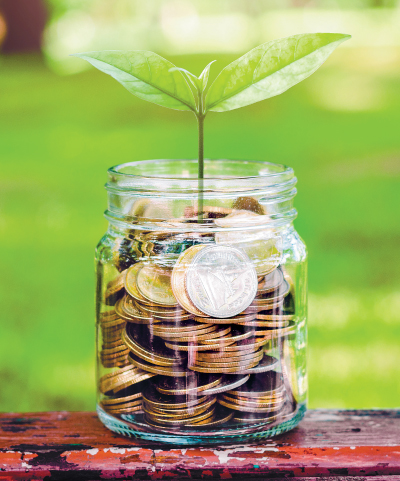 ESG - environmental, social and governance - is one of the hottest acronyms in the fixed-income world.

Finance has traditionally been a place where the emphasis has been on profits and less on heart and soul. But that is quickly changing as the trend toward generating social or environmental benefits, in addition to financial returns, gains momentum.

It has gone beyond rhetoric. Norway’s sovereign wealth funds and Japan’s Government Pension Investment Fund made it clear that they will factor in social and environmental value. Norway’s funds exclude holdings if the investments are involved in coal.

With the deep-pocketed institutions leading the way, more companies and financial institutions around the world are reorienting their investments toward the projects or companies that operate with an eye on ESG issues, a phenomenon called “impact investment.”

More than one-quarter of assets under management globally are now being invested according to such criteria, according to New York City-based McKinsey & Company.

The size of the ESG-related bond and loan market jumped 26 percent in 2018, with a record $247 billion worth of sustainability-themed debt instruments issued that year, Bloomberg reported.

Korea is trying to keep abreast of the global transition toward more responsible investment, and it is experiencing explosive growth in the sustainable finance market.

On the issuer side, market observers say, ESG bonds often appeal to foreign investors, as they give the impression of adherence to global standards.

ESG bond issuance amounted to 12 trillion won ($10 billion) in Korea this year through September, an all-time high and higher than the cumulative total over the past decade.

ESG bonds date back to 2007, when they were first used by European banks to fund clean energy projects. They have since also been issued by governments and corporations.

Those bonds raise capital from investors with the promise that the funds will be used to finance projects with green benefits, social benefits or a combination of both.

Investors receive predetermined returns on top of the value of the bond at maturity.

In Korea, the sustainable debt instrument market is led by established banks, though more financial institutions are exploring the concept of impact investing.

One of the most active players is Shinhan Financial Group, the largest financial entity in Korea.

Its commitment to sustainable investing is most notable in the “Eco Transformation 20-20” project.

Under the plan, Shinhan will invest a total of 20 trillion won into projects funding environment preservation and climate change solutions, contributing to company’s goal of cutting carbon emissions by 20 percent by 2030.

“The proceeds will go toward Shinhan’s environment projects, such as establishing eco-friendly buildings and the adoption of electric vehicles,” said a spokesperson at Shinhan Financial Group.

The focus of the financial instrument, however, leans more toward social impact.

“The ESG bond is intended to address social issues in line with various campaigns and projects that we have undertaken,” a source at Shinhan Card said.

The card company launched different projects, including supporting mom-and-pop stores in Euljiro, central Seoul, and building libraries across the region.

Archrival KB Kookmin Bank jumped on the ESG bandwagon, releasing two sustainability-themed bonds, for a total of $7.5 million in funding, with objectives encompassing both social and environment causes.

The majority of the investors, more than 70 percent of them, came from Asia, followed by European investors, according to KB Kookmin Bank.

“The proceeds of the green bonds will be spent on providing auto financing for consumers who purchase electric vehicles, hydrogen-powered cars and hybrid models,” a spokesperson at Hyundai Capital said.

Woori Bank got into the action in May by floating $450 million worth of sustainability bonds targeting Taiwanese investors, while KEB Hana Bank raised $600 million in January.

State-run lenders have also been active in engaging with the relatively new market.

Besides financial companies, major corporate players, including steelmaker Posco, LG Chem and GS Group, are also going green, announcing the issuance of the bonds with a sustainability label.

In the initial stage, sustainability-themed debt instruments were denominated in currencies such as the dollar and Swiss franc. But the trend changed with the growing number of won-denominated issuances.

“In the past, the sustainability bonds were denominated in foreign currencies, but after Korea Development Bank’s issuance last year, most of the bonds are won-based,” said Han Gwang-yeol, analyst at NH Investment & Securities.

The Korean government is only dipping its toes in the water, issuing its first green and sustainability bonds and raising $1.5 billion.

Moon Jae-in’s administration could turn more aggressive in terms of ESG financing since the theme goes hand in hand with the its policy direction.

In January, the government laid out a roadmap for making hydrogen-related technologies a new growth engine for Korea.

Han also expects such debt offerings to gain traction down the road.

“A scholarship foundation recently announced that all of their bonds will be ESG-themed,” Han said, “A substantial amount of bonds issued by banks and public corporations will likely include ESG mandates to attract investment demand.”

Since their inception in 2007, the range and size of sustainability-themed investments have grown.

In the beginning, the vast majority of the instruments concerned the environment but later widened to include social and governance elements.

The proportion of green bonds took up 100 percent in the sustainability financing market in 2012 through 2013, according to Bloomberg, but the portion has since fallen to around 80 percent.

Besides green bonds, alternatives such as social bonds and sustainability-linked loans have grown substantially. By region, Europe is the dominant player, followed by Asian countries and the United States.

Recent expansion has been centered in Asia.

“These were also the three fastest growing regions in the previous two-year period. The largest three regions - based on the value of their sustainable investing assets - were Europe, the United States and Japan.”

Still, not a panacea

Despite their potential stability and their support of official policy, green bonds do have their downsides. One of the main concerns is that it is difficult to discern exactly how green a project is.

“In issuing and managing ESG bonds, there are no globally certified standards to verify the authenticity or feasibility of the projects that the issuers claim are designed to improve social and environmental problems,” Han of NH Investment & Securities said. “And no penalty exists even if an entity fails to follow through with its pledge.”

The Korea Center for International Finance, a financial think tank, warns that ESG bonds are difficult to define.

“There is no clear definition or classification for ESG investments,” the center noted in a report last year.

“That could cause confusion to investors and lead into weak investor protection,” it said.

Norway encountered a similar issue, which prompted the government to launch a unit in charge of monitoring ESG investments.

The Ethics Committee is responsible for advising fund managers on the compatibility of their investments.

The Ministry of Finance is expected to announce the composition of an expert commission and its mandate.

Although the process is not mandatory in Korea, Han noted more issuers voluntarily registered with independent agencies to get themselves noticed in the ESG bond universe.

“Eighty percent of the ESG bond issuers consult with agencies for objective monitoring. In Korea, Korea Corporate Governance Service is leading the assessment of ESG activities.”

The McKinsey report noted that green and sustainable bonds may achieve good returns.

Skeptics say that the bonds will likely deliver poorer returns and lack liquidity.

“The findings showed that, over the long term, it is difficult for ESG funds to outperform the broader market indices,” the report said.

Local think tanks called for a regulatory framework for the sustainable investment market - including clear definitions of the three mandates and development of benchmark indices.

“ESG investing is gaining ground, backed by the National Pension Service and asset management industry. Still there is a room for further development,” said the Korea Center for International Finance.

The research institute proposed that the regulators strengthen regulations on public disclosure about ESG investment and develop proper benchmarks to track and assess the performance of those products.

In response to the demands, efforts have been undertaken to facilitate the relatively new market.

Korea Exchange, the country’s stock market operator, is on track to create indices designed to overweight or underweight the listed companies that have lower or higher levels of carbon emissions or ESG investing.

“ESG investment has become essential and acted as a catalyst to grow Korea’s capital markets,” said Chae Nam-gi, director at the Korea Exchange in a conference held in July.

The Korea Exchange “will develop distinguished ESG indices based on recent studies and diversified assessments to raise awareness of ESG and support related investment,” he said.

The Korea Exchange currently operates an ESG index for major companies listed on the Kospi.

Son Seung-tae, head of index development at the Korea Exchange, said that it will extend the range of the companies included in the category and develop an ESG index for Kosdaq-listed companies this year.