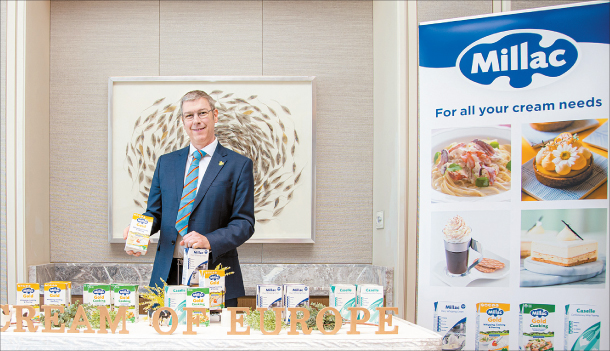 In a few weeks time, you’ll be able to make the creamy drinks you love from Starbucks at home. Ireland’s popular dairy products, which are widely used by food companies to give their treats sweet flavors and a creamy texture, will soon be available at local retailers.

Cream from Irish dairy cooperative Lakeland Dairies was extensively promoted last year with the release of the Fresh Cream Pie by Orion, makers of the famous Choco Pie.

After making an impression with its partnerships with local snack and drink brands, the cooperative is now gearing up to appeal directly to individual consumers in Korea with their products that will become available at local supermarkets from as early as June.

The production of cream products may start as early as March, but logistics may delay the arrival of the products to Korean soil until a few months after.

Right now, as the company targets companies that make products in big quantities, only one-liter (2.1-pint) packs of cream are available. But from next year, the company will release 200-milliliter packs for those who don’t need as much cream when baking or cooking at home.

The company claims that the density of its cream makes it possible to bring out the flavors you want or have had at some of your favorite restaurants that serve creamy soup or pasta.

The company’s products are well known in Britain, yet that makes only a little room for further growth - hence they are looking for other options for sales in other regions, said professor Mike Johnston, chief executive at Dairy Council for Northern Ireland, during a media conference held on Wednesday.

Northern Ireland has more than 3,100 dairy farms and produces 2.34 billion liters of milk per year.

It currently makes about 35 percent of its total sales outside of the European Union. Under the cooperative, one of the better known brands to local consumers is Millac.

At the moment, only cream products are set to be available in the local market next year, but the company is also considering bringing its butter to Korea as well.