Furniture for those who work outside of the office: Creating a workspace that is as comfortable as home

Furniture for those who work outside of the office: Creating a workspace that is as comfortable as home 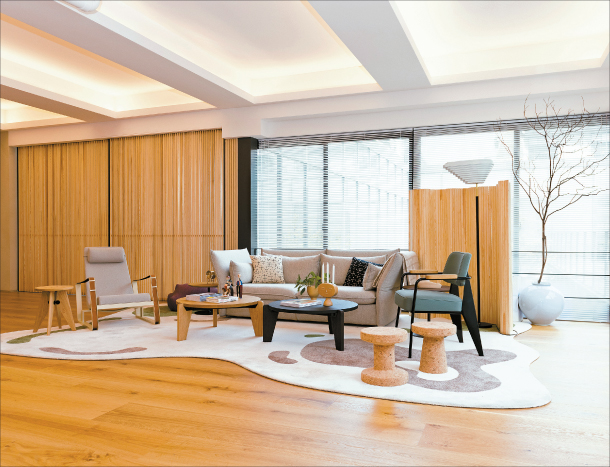 On the second floor of the popular Tartine Bakery Dosan, a local branch of the San Francisco-based bakery, lifestyle magazine Kinfolk has opened a space to offer locals a chance to catch up on the latest lifestyle trends in the same building as the hip eatery.

Extending the space’s identity as a platform for new trends, furniture brand Vitra has been invited to show off their latest designs. Until Nov. 10, furniture from Vitra will be on display to show that it is not only focusing on comfort at home but also comfort in the office as well. Its newest series, called Softwork, a module which can be connected to make working at an airport, cafe or even at an office more comfortable, is on display alongside other home furniture and small props.

To better introduce the trends in the design industry, the mastermind behind Softwork came to Korea to meet with his fans. Designer Edward Barber of internationally renowned design studio Barber & Osgerby, visited Korea to talk about his work with furniture company Vitra at the newly-opened Kinfolk Dosan, in Gangnam District, southern Seoul.

“Designers are people who are looking for ways to innovate and inspire change,” said Barber, while meeting with local media at Kinfolk Dosan Wednesday, adding that keeping their eyes open and doing research is important.

“As the world is changing, it’s about how you can affect that change.”

The new Softwork series features comfortable seating areas with small tabletops and electric outlets attached. Those looking for a place to work or lounge can simply bring their laptops or books to the showroom, sit there for a while, and try it out for themselves. Multiple modules can be attached to make a round seating area, and add-ons like a power strip can be hidden in between cushions when not in use. The final products reflect a trend seen in many different countries by those using co-working spaces, cafes or any kind of public area. The designers visited Google’s offices in London, airport lounges and also looked at what’s been done at companies like WeWork to see what features people look for when they work outside their home. 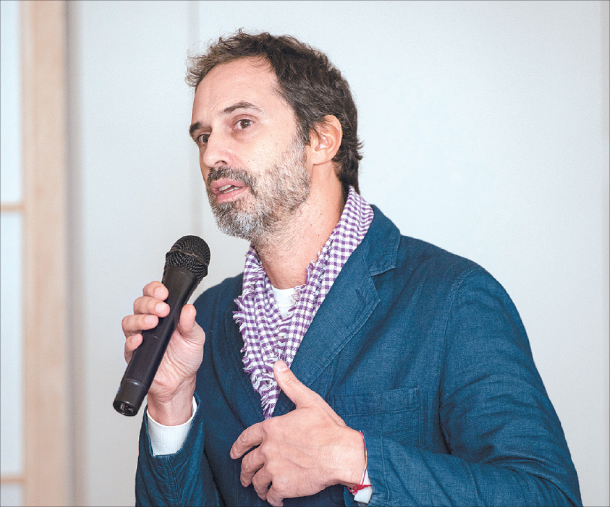 Barber first noticed this change after the 2008 financial crisis which pushed many into the world of freelancing. He got even more first-hand experience when he worked with Ace Hotel. He put in a large desk for the guests to work at, but when the hotel opened, the people living in the nearby community all came there to work. He remembered that it was a chaotic scene, with people putting their laptops on their knees and charging cables everywhere. Hence, his studio started to take a look at the places where people work.

“It is okay for maybe half an hour, but when you have your laptop on your knees, your posture is bad, and having your laptop [touching] your body is bad,” Barber said, explaining his design.

New features or add-ons that are released years later will be able to be separately purchased and attached to the module, he said, and he forecasts that this kind of seating area will replace office chairs and tables.

The initial brainstorming for the products that are available now often started with just a concept, without any drawing or a sketch, the designer recalled.

Visitors, left, at Kinfolk Dosan mingle outside after they try out Vitra’s newest design series called Softwork, a module made to make the working experience more comfortable. [HO CHANG]

“We always challenge [Vitra], and it is always open to accept such challenge,” Barber said, explaining how the company is able to be one step ahead of coming up with products that are not widely popular in everyday life.

Just like add-on features that may come a decade later can be attached, the designer always thinks about design that’s efficient and comfortable for people in generations to come. Long-term sustainability is what he is pushing for, and that naturally leads his attention toward the environmental impact he makes with his design and furniture.

His research centers around materials that are sustainable, especially plastics, as it can be endlessly recycled. He has been working to make plastic furniture that can be recycled for something else later on.