At Seoul Fashion Week, everyone is welcome: With a new director at the helm, the biannual event has opened up to the public

At Seoul Fashion Week, everyone is welcome: With a new director at the helm, the biannual event has opened up to the public 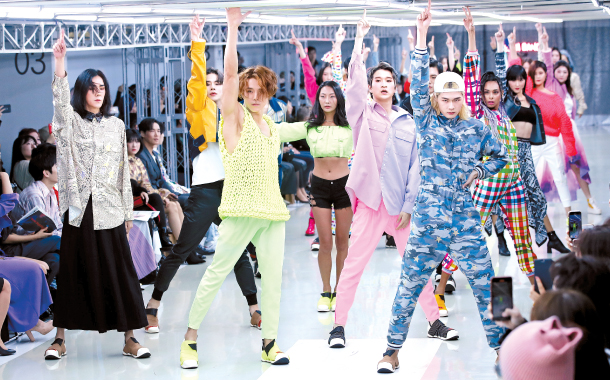 Models for Blahbang put on a mini musical for their show on Thursday at the Dongdaemun Design Plaza in central Seoul during the 2020 Spring/Summer Seoul Fashion Week, which ends today. [NEWS1]

The 2020 Spring/Summer Seoul Fashion Week is wrapping up today after a week of runway shows, public events and talks at the Dongdaemun Design Plaza (DDP) in central Seoul.

This edition of the biannual extravaganza went on without a hitch, with celebrities and fashion enthusiasts coming to the plaza dressed to impress in edgy hair and makeup.

A few notable changes made this season unlike any other. Tickets to fashion shows were made available to the public for the first time, and U.S. fashion media outlet Women’s Wear Daily (WWD) published special edition newsletters about the event that were widely available at the DDP.

At the helm of it all was Jeon Mi-kyung, former editor-in-chief of Harper’s Bazaar Korea and Seoul Fashion Week’s new director.

Jeon was omnipresent — she was in the front seat of shows, looking around the trade show and rushing across the venue to her next destination — but still made time to take selfies with fans who recognized her from the crowd.

“I’m trying to attend every show because I need to make sure that everything is running properly,” Jeon said breathlessly when the Korea JoongAng Daily caught up with her as she made her way to her next appointment. 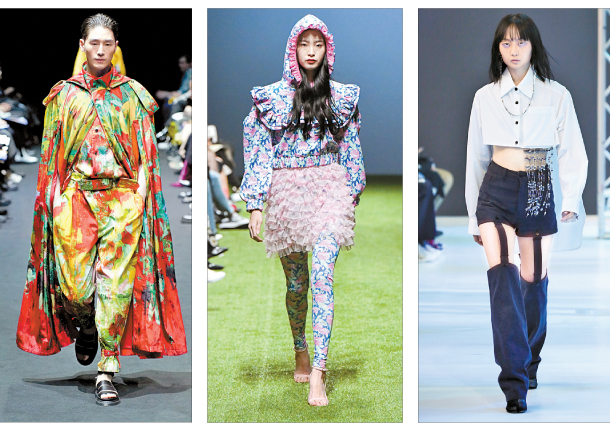 Trends of the season

Bright neon colors and a return to vintage chic were some of the motifs that ran through many of the collections this season.

Blahbang probably put on the most memorable performance of the week. The show, titled the “Greatest Fashion Showman,” was a 15-minute mini musical with models of varying ages, including designer Top Park himself, dancing together to upbeat tracks like “Dancing Queen.” The designs were equally bright and flashy, a direct take on the common K-pop concepts of “glamorous boy groups,” “lovely girl groups” and “street hip-hop,” according to a note from the designer.

Brands like Demoo ParkChoonmoo and Betterkind offered more ethereal styles for a casual spring or a summer beach look, while young designers like Seokwoon Yoon puzzled onlookers with experimental designs that included having a model wear a zipped-up garment bag while walking down the runway.

Like in many parts of the world, sustainable fashion is a rising concern for Korean designers.

In a move to bring awareness to the issue, the inaugural “Sustainable Fashion Summit Seoul” was held during Seoul Fashion Week, inviting 24 leading Korean and global innovators in the field to speak on Wednesday and Thursday.

Potted plants were handed out to everyone in the audience while water and coffee were provided in reusable cups. Korean brand PARTsPARTs held a special workshop for creating “zero waste” T-shirts and bags using leftover fabric. The summit is set to become an annual event.

Open to the public

Public accessibility was an important theme at this season’s event.

Off-shows, or fashion shows held outside of the DDP, were also held in accessible locations across Seoul.

Brands Unnorm, Ahhorn, Noixte and Jchoi presented their collections outdoors on Wednesday just outside of Sinchon Station in western Seoul, a popular hangout spot for young Seoulites. Beyond Closet, which showed at the DDP last season, opted to feature its latest designs amid autumn leaves and nature at Seoul Forest in eastern Seoul.

Besides fashion shows, there were many free events for the public to enjoy within the DDP. Veteran designer Sul Yun Hyoung’s retrospective exhibition “Hyeonghyeong-saeksaek” was a highlight. The free display, open through Nov. 7 at the DDP’s Design Pathway, showcased 45 years of design by Sul, whose inspirations come from traditional Korean materials and folk tales.

Commercial brands including Baskin Robbins, Missha, Dr. Martens and NHN godo also set up booths to provide free services like lipstick samples and professional photography. Aspiring child models with their mothers, high school students in uniform and tourists from across the globe made up a large chunk of visitors to Seoul Fashion Week.

“In Korea, even if you don’t have tickets, you can share the event with others,” said Chloe Gleises, a student from France who’s participated in Seoul Fashion Week for the past four years.

“We can look around and watch shows here, but in France, it’s really private and hard to get tickets.”

With Fashion Weeks running concurrently in Tokyo and Shanghai, Seoul Fashion Week organizers had to work hard to make the events at the DDP stand out. Making the event as accessible as possible proved to be the event’s biggest draw.